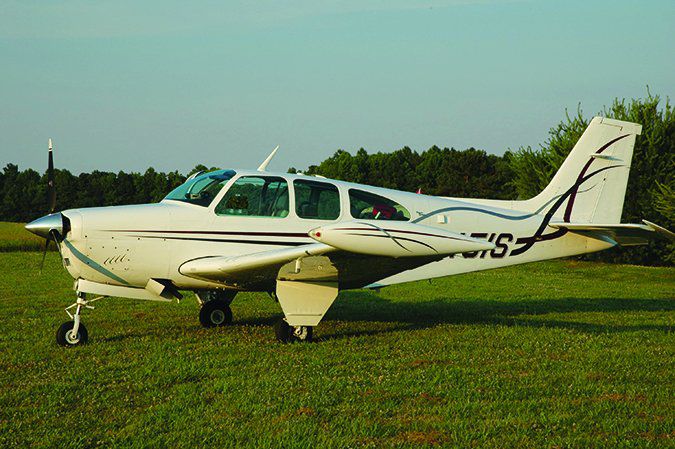 So I got into one of those internet discussions with other pilots about airplane performance. The focus was on a 2100-foot-long grass strip near sea level and how well a Bonanza would handle it. We didn’t disagree on the typical Bonanza’s ability to get in or out, but I think some people might be a bit more optimistic about such things than I am.

My home runway is 2500 feet, paved and (poorly) lighted. Even with three large men and near-full fuel aboard my C33A Debonair, I don’t need to use much braking to get down and slow to taxi speed by around 2000 feet. Heavier braking would easily see 1500-foot-long rollouts and, if I’m light, 1000-1250 feet is relatively easy, also, especially with some headwind.

On a 60-degree F day and at 2800 pounds, the book says I should be able to get down and stopped in around 750 feet with maximum braking, after a steep, power-off approach and crossing the fence at 61 KIAS. Twenty-eight hundred pounds in my airplane means me and my stuff, plus about 360 pounds of fuel, or 60 gallons. Interestingly, the takeoff performance chart for the same conditions show about a 750-foot ground roll, too. Easy-peasey.

All that’s on dry pavement, though. On turf, things are different. Sufficiently different, in fact, there are no published numbers in my airplane’s POH for anything other than a dry, level, paved runway. No numbers for, say, a soft-field takeoff. What to do?

A Cessna 182 POH I have suggests adding 15 percent to the ground roll on a “dry, grass runway.” What if it is a bit wet, or soft? What if the grass is high? Add 25 percent? Fifty?

Without formal guidance in the POH—which few of us have—it’s much better to be safe than sorry. For that takeoff from the 2100-foot grass runway, I’m going to plan on using twice the published figure, which means at least 1500 feet to get airborne. That covers me for soft turf, high grass and poor technique. And I’m especially concerned about poor technique.

The thing is, I’m not a test pilot, and takeoffs like that haven’t been demonstrated. Even if they have, they demand excellent technique. And I’m just not that good. Chances are, you aren’t either.