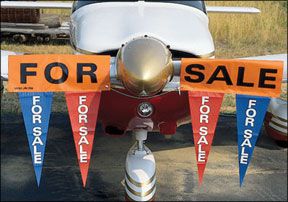 An economic times like these, its more than a little disheartening each month to receive so many brokerage statements covered in so much red ink. Looking at my airplanes value-probably less than what I paid for it 10 years ago, minus all the improvements made-doesnt provide much consolation. Two things make all of this less unbearable.

First, Im not alone. Any aircraft owner has seen his or her flivvers value drop in recent months. At least mine hasnt dropped as far or as fast as some others (can you say “business jet?”). Second, despite last summers meteoric climb, avgas prices remain relatively reasonable, at least in my part of the U.S.

A third, unrelated thing is the airplane doesnt need anything. Ive spent time, money and effort getting and keeping it well sorted out, expenditures paying off in reliability and performance.

But there are many out there who might be looking to upgrade their aircraft-either with a new engine, new paint/interior or by trading it for something else. For them, there are wonderful opportunities out there right now as long as little or no financing is required. In my admittedly hazy memory, one can buy more airplane for fewer dollars today than ever before.

In its March issue, sister publication Aviation Consumer included a feature article detailing recent price reductions occurring across the board among various popular GA aircraft. For example, a solid, early, steam-gauge Cirrus SR20 is hovering around the $120,000 mark, while all-glass SR22s are down around $200,000. If plastic isnt your preference but building multi-engine time is, nicely equipped piston twins can be had for well under $100,000.

And thats not all: If you already have a plane but want to do some upgrading of your own, you couldnt have picked a better time. Paint, engine and avionics shops alike are looking hard for new business as overall economic activity declines. Some are offering cut-rate deals, like a Garmin GNS430W installed and interfaced to your other boxes for little more than a new unit costs, or reduced labor rates on maintenance and inspections. Even if your favored shop isnt publicly offering such deals, talk to them-you might be surprised what they can do for you right now.

Many owners have decided to sit out the economic storms, and more and more abandoned airplanes sit unused. Of course, nothing is worse for an airplane than sitting.

Many lament the current state of GAs economy, but if pilots and owners dont get out there and fly-or buy-its not going to get better. Yes, times are tough and other things may have to take priority. But nothing will reverse this slump better or quicker than ignoring it.