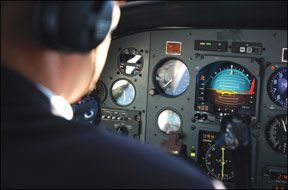 Several recent newspaper and magazine articles have reported on supposed pilot shortages in the U.S. and, especially, abroad. The reporting, of course, focuses on airline flight crews but doesnt really distinguish between long-established U.S. carriers flying Boeings and Airbii and what at least one industry observer labeled the “lower rungs of the aviation career ladder:” regional jets and turboprops. At least one close friend, himself serving as a regional jet captain, has expressed amazement at the relatively low talent and experience levels hes finding in the seat to his right.

A handful of years ago, you couldnt begin to think about getting into jet equipment as a first officer with only 1500 hours total time. Nowadays, its closer to 500 hours at many regional carriers. In less-developed regions and for some European carriers and operations, experience requirements are even lower. Many of us familiar with general aviation experience levels-and with charts linking accident statistics to total hours-shudder at the concept of airline pilots with so little time. One mitigating factor is these low-time crewmembers are being paired with high-time captains. Usually.

It must be nice to snag that airline job with only 500 hours. If thats all it took three decades ago, its possible youd be reading someone elses words here instead of mine. But there are some fundamental misconceptions going on, which make any comparison between airline hiring today and, say, 30 years ago similar to comparing apples and oranges.

For one, todays cockpits are much more automated, even if there usually are one-third fewer people available to do the job. The airplanes, the ATC system and the training all are much more reliable. Safety is improved by a couple of orders of magnitude.

By the time todays new hires move from the right seat to the left, theyll have gained thousands of hours and years of experience. Theyll have that experience by virtue of getting out and flying in the system, day in and day out. By the time theyre stiffly welcoming their own new hires, theyll have pretty much seen it all. Of course, the time they spend in that right seat is nothing more than on-the-job training for the left one.

The same is true for most GA pilots, with exception of the seat exchanges and the paycheck each month. The old saying, “Good judgment comes from experience, and experience comes from bad judgment,” was never more apt than it is in aviation.

I am frequently asked how to gain enough experience to be able to reliably and safely operate a GA airplane. The answer today is the same as it always was: Go out and fly. Youll make mistakes. Youll learn from them. From those mistakes, youll gain the judgment to not make them again. And thats experience.

Go out and fly.