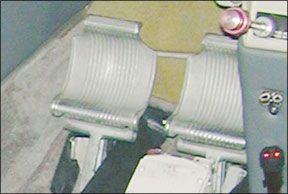 Upon investigating a loose rudder pedal, the controls were disassembled. We found the shaft had been double-drilled with the holes overlapping. This aircraft is a relatively new aircraft, having been certificated in January 2002. Pilots rudder

Severe corrosion was found in the l/h spar tube at wing station 90. The probable cause is exposure to moisture over an extended period of time. My recommendation would be to seal and liberally apply linseed oil to the tubes interior. A further recommendation would be performing visual and dye-penetrant inspections of this area at 25 hour intervals up to the first 100 hours. If no fatigue cracks are noted, extend the inspections to every 100 hours-or each year-whichever occurs first.

The hydraulic reservoir sight-glass on this aircraft is a four-inch piece of tubing located on the firewall in the nose cargo bay and protected by a piece of Plexiglas. The sight-glass leaked, allowing hydraulic fluid down into the nose gear tunnel and in contact with the Janitrol heater, causing smoke in the cockpit.

The operator said the Plexiglas was not damaged, so he thinks the tubing became brittle over the years. He has now decided to include a replacement of the sight-glass hose (p/n 5117007-12) with the aircrafts 1000-hour inspection.

Fuel was spraying from the number three cylinder when priming prior to engine start. A mechanic described the primer line (p/n LW12098-1-116) cracked at the welded tip where it attaches to the cylinder and suggests greater security for these primer lines at more places to minimize vibration.

The Australian Civil Airworthiness Safety Authority (CASA) has issued an airworthiness bulletin (AWB 53-006) recommending inspections for corrosion damage on the elevator torque tubes (p/n 0532001-31) in Cessna model 172 airplanes. This part has been installed on Cessna 172s since the model was introduced in 1956.