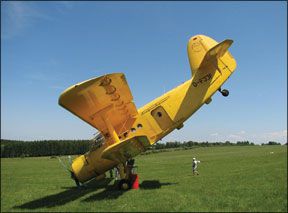 A regional turboprop captain and his fatigued first officer engage in a wide-ranging discussion while maneuvering for an approach into Buffalo, N.Y. While descending in icing conditions, the crew allows their airplane to get slow enough the stick pusher activates. Instead of powering up and reducing the angle of attack, the captain abruptly pulls back on

the yoke, forcing the airplane into a stall/spin from which it doesnt recover. All 49 aboard the Bombardier Dash-8 are killed, plus one on the ground.

Two experienced pilots become engrossed in crew-scheduling minutiae and fail to notice theyre not on the correct ATC frequency while their Airbus 320 flies past its intended destination. Only after a flight attendant asks for an updated ETA do they realize where they are and re-establish contact with ATC, which has begun to think the flight had been hijacked.

An air traffic controller at a busy tower fails to notice a departing GA pilots incorrect frequency readback-in part due to being on a personal phone call and in part because of simultaneous transmissions on a different frequency. The GA pilot was flying a Piper Saratoga, which collided in mid-air with a sightseeing helicopter over Hoboken, N.J. All nine aboard both aircraft were killed.

Each of these three events are different. They involve different equipment and different airspace, and they raise different questions about the safety and reliability of this nations air transportation system. But they all share one common thread: lack of professionalism.

Merriam-Websters Online Dictionary defines “professionalism” as “the conduct, aims, or qualities that characterize or mark a profession or a professional person.” Translation: Earning a living at an endeavor does not a professional make. Whether youre a grizzled veteran counting your flight time in engines instead of hours, a pre-solo student, an air traffic controller, flight attendant, maintenance technician, rampie or somewhere in the middle, each of us has a responsibility to engage in this activity with the utmost care, thought and dedication.

In mid-May, after this issues deadline has passed but before it appears in your mailbox, the NTSB plans to hold a three-day safety forum, “Professionalism in Aviation,” to seek methods for ensuring excellence in pilot and air traffic controller performance. While the value of the NTSBs approach cant be known now, the idea of trying to ensure we all exercise a bit more care when we aviate isnt a bad one.

In coming months, were sure to hear more on this topic from the NTSB, and youll likely read more about it here.