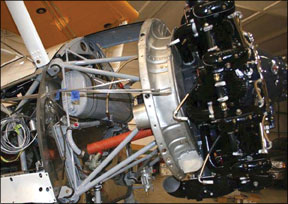 Inspection of a recent engine installation uncovered a fractured engine-mount bolt. After informing the STC holder of the failure, we were told we should have re-torqued these bolts after 25 hours of operation. This information was not included in the STC. The submitter believes the STC is inadequate in ensuring continued airworthiness.

During an annual inspection, all parts inside the tailwheel unit were found extremely worn. Additionally, the tailwheel axle had been damaged and its end was partially ground off,

extending through the cotter-pin hole used to secure the nut on the end of the axle. The entire Scott 3200 tailwheel assembly was replaced with a serviceable unit.

Both aircraft battery-shelf support brackets were found cracked in their forward and aft ends (four cracks total). Each crack started at the end of the support in the 90-degree bend radius, propagating toward the center of the part. This is the fourth 182S/T model we have found to be cracked in this manner, each requiring replacement supports (p/n 0712059-1). One previously repaired aircraft has already cracked the replacement parts.

Four reports dating back to 2006 detail structural damage to the empennage after extreme braking. Extensive structural damage-including gaps in the structure and de-bonding of the composite fuselage-have been identified. These extreme braking maneuvers consist of prolonged periods of heavy braking and tire skidding, resulting in large oscillatory motions known as “gear walk.” Cessna reportedly is developing an advisory to communicate information about the proper use of brakes as noted in the POH.