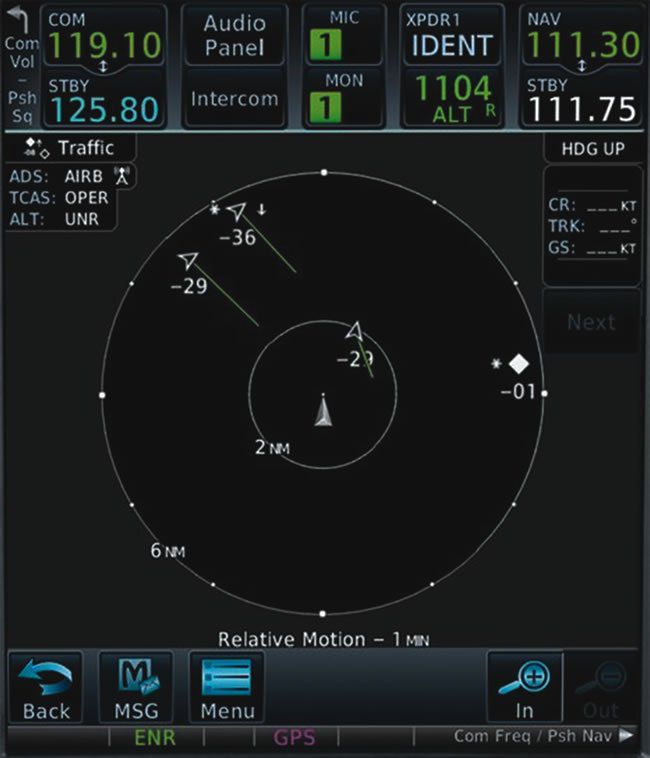 Like me, youve probably been using the FAAs free traffic and flight information. The two services, TIS-B and FIS-B, respectively, comprise the basic benefits the typical GA operator can expect from ADS-B IN, a component of the FAAs NextGen ATC system. Theyre available now, well in advance of the FAAs 2020 mandate to install and use the other component, ADS-B OUT.

Its considerate of the FAA to make these services available ahead of the 2020 deadline, but we wonder if doing so wasnt a strategic misstep on the agencys part. Why? Well…they just arent that good. Theyre certainly not better than whats available from other sources and technologies, nor should we expect them to improve much over the next few years. And, theyre advisory only-the FAAs own data over its own service isnt approved by the agency to meet any existing requirements. Thats what the FAA is offering GA as inducement to equip with ADS-B. Other benefits promised are mainly advanced flight-path management tools designed to save airlines and business jets fuel and flight time.

An increasing number of voices are concerned that ADS-B IN is the only benefit GA users get out of a deal requiring them to plop down a few thousand dollars-perhaps a double-digit percentage of their aircrafts current value-just to access the same airspace theyre safely using now. As the situation stands, installing mandated ADS-B OUT equipment will allow you to fly in exactly the same way in exactly the same airspace you use today, wrote AOPA President Mark Baker in October.

Yes, using ADS-B INs TIS-B and FIS-B can substantially enhance a pilots situational awareness. But that basic information has been available in the GA cockpit from other sources for at least 10 years, and theres nothing preventing us from continuing to use it. Indeed, one can buy a lot of monthly data subscriptions for for the price of a single ADS-B OUT installation. And if you install only 978 MHz UAT equipment to handle ADS-B OUT compliance, youll still have to carry a Mode C transponder.

Even with all this, it appears GA once again is embracing a new technology before the airlines get around to it: AOPAs Baker reports the FAA estimates about three percent of major air carriers and 10 percent of the general aviation fleet were equipped with ADS-B OUT as of September 30, 2014.

Where any backlash against ADS-B will end up is pure speculation right now. Commenting on what comes next, Baker said, The problems lie in the implementation process. We need the FAA to pause, listen carefully to what users need from the system, and work with the user community to put it all together. Maybe, but we also need a tangible return on the investment were going to be forced to make within five years. As presently configured, ADS-B IN by itself just isnt enough.