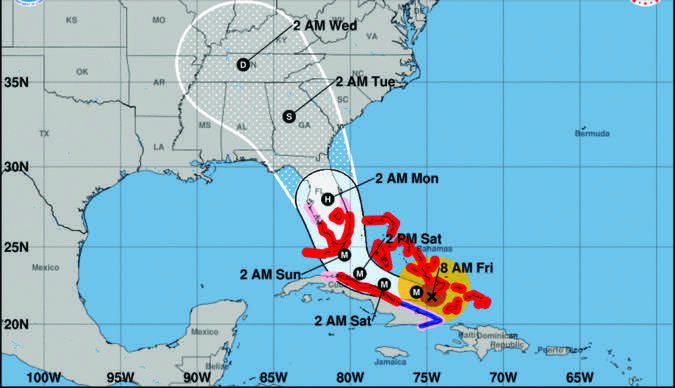 I’m not a native Floridian, so I generally pay great attention to local weather forecasts when they include the words “tropical storm” or “hurricane” followed by someone’s first name. And because I’ve never seen such weather—beyond the occasional tropical low that spreads relatively benign wind and rain across the state—I’ve decided it’s a life experience I can do without. So it was in September with Hurricane Irma.

My longstanding, unrefined plan for dealing with an approaching hurricane always has been relatively simple: Get in the airplane; go somewhere else; stay there. With Irma, I had roughly a week to prepare; the forecasts were that accurate. I didn’t use all of that time productively, of course, and found myself rushing through various work-related and personal tasks in the final hours to ensure that a few days’ absence wouldn’t leave anyone, myself included, in a situation.

Putting aside all the homeowner-related tasks—storing loose items outside the house, ensuring the generator was healthy and that important papers, data and hard drives were secure—there also was the flight planning. Among the basic questions I needed to answer were where I was going, and when. As luck would have it, my original destination became untenable when revised forecasts showed Irma heading straight for it a couple of days after passing over my home. The other question was answered when I advanced my departure by about 18 hours, after realizing I was cutting things too close.

I finally managed to get the wheels in the well about 24 hours ahead of Irma. By then, I was the only one moving at the normally busy nearby airport I used to top off my fuel tanks. Once airborne and en route to my home away from home, it was clear I was on the backside of the evacuation curve: The small amount of GA traffic present on the frequency was all headed north, except for one flight apparently running some kind of shuttle to and from Orlando.

Talking with controllers was both eerie and humbling: It was obvious I and others were bugging out while they remained behind. In response to another pilot’s query, one controller offered that after he went off-shift later that evening, a core group of his colleagues basically would lock themselves into their facility and provide ATC services until they were relieved. Despite my longstanding love/hate relationship with ATC, I came away with nothing but respect and admiration for those men and women.

Otherwise, the flights to and from my home away from home were mostly uneventful. Yes, I had 25-knot headwinds both ways (something to which I’m accustomed). Yes, the weather included thunderstorms, reduced visibility and gusty winds. Yes, there were recovery-related TFRs I had to plan for, including one for drone operation abutting my home airport’s traffic pattern. Yes, there was a long list of Notams detailing facility outages and closures to sort through on the return flight.

In the end, I got through Irma with only mild drama and relatively little property damage. Others were not nearly so fortunate, nor did they have the resources to simply pick up and relocate themselves to a distant hotel for a few days’ impromptu vacation. But even though my flights were uneventful, that doesn’t mean they were without risk. The additional risks I faced were self-imposed, mostly—I was susceptible to two classic risk factors: stress and fatigue. For obvious reasons, the couple of days leading up to my flight out ahead of Irma were busy and hectic, and included a lot of physical activity resulting in fatigue. As I started the airplane’s engine, I asked myself, “What am I forgetting to do? How long will I be gone? Will all this be here when I return? What will I do if it isn’t?” Those kinds of unanswerable questions create stress.

The FAA’s Risk Management Handbook (FAA-H-8083-2) tells us, “Stress causes concentration and performance problems,” and that fatigue “continues to be one of the most insidious hazards to flight safety, as it may not be apparent to a pilot until serious errors are made.” These concepts should be familiar to long-time readers. They certainly were on my mind as I planned my flights and made airborne decisions about routings, supplemental oxygen use and destinations, among others.

As I mentioned, weather was a concern on both flights, and awareness of my fatigue and stress played a role in my decisions. In one instance, I forcefully disagreed with a controller’s suggested weather-avoidance heading. I don’t know how things would have worked out on the heading he wanted, but I knew I wasn’t ready for them. On the return flight, I wanted to top off the airplane at Cheap Avgas Muni before hopping over to home plate, but I really didn’t want to dodge several thunderstorms to get there. After being aloft for five hours, I was more worried about what I would find upon landing at home, not avoiding thunderstorms. Instead, I opted to do without the fuel stop and landed at home plate with plenty of fuel aboard to go get more.

A lot of ink and pixels get spilled over decisions to relocate airplanes or hunker down in advance of storms like Irma, but few observers factor in the additional risks pilots face when evacuating. I can attest that those additional risks are very real, and awareness of them is at least as important as the decision to go or stay.