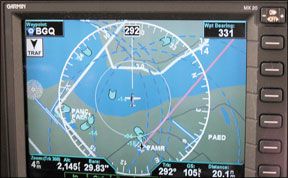 Beginning on page 12, Frank Bowlin tackles the question, “Can ADS-B Work?” We all should hope the answer is a resounding “yes.” The FAA is busy firewalling its throttle and pushing its nose down, intending to get us there by 2020. In October, the agency released the first of several proposed rules on ADS-B, on complying airborne equipment.

Im a confessed ADS-B skeptic. Put bluntly, I have zero confidence in the FAAs ability to manage a multi-year project of this scope. Im also not sanguine about doing away with much of the ground-based surveillance radar network as the agency proposes, and dont believe all the airspace efficiency claims being made. (The vast majority of congestion problems dont involve airspace; they involve available runways and airline scheduling.)

Theres also a privacy concern with ADS-B: Not only will other aircraft know who is

operating near them, but the FAAs logs will know everything about everybody flying with the technology. At least now, I can still squawk 1200 in the en route environment at up to 17,500 feet and remain relatively anonymous. The wisdom of doing so is debatable, but its still legal.

Finally, much of the justification for ADS-B is based on efficiency, not safety. And much of the efficiency argument involves the FAAs ability to save money, not yours or mine. The incremental savings the average piston driver will enjoy-if there are any piston drivers remaining by 2020-will be small, probably not worth the installation investment. Still, the investment will be necessary to access certain airspace.

Finally, I remain to be convinced the ability to self-separate and self-sequence my airplane from others-two of the ADS-B benefits being touted from time to time-is a safety enhancement. For one thing, it sounds like a major workload increase. For another, I have yet to see any “rules of the road” which begin to explain rights of way under ADS-B: If two aircraft are converging, which gives way and how? When? What separation must be maintained? Will ATC provide that separation?

Note we havent even begun talking about equipment and installation costs, since theres only one GA-level ADS-B compliant transceiver on the market right now, Garmins GDL-90.

Im willing to be educated on these points-really-and do hope ADS-B is a success. It could well be the best thing since sliced bread. But, for a technology the FAA wants to place in widespread use within seven or eight years, there seems to be plenty of unanswered questions.

Those answers may already exist, of course, and Im too lazy to have found them. Again, Im happy to be educated. But if I have those questions, others do, too. Someone needs to do a better job of selling this to us.