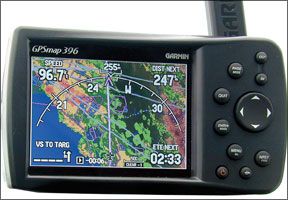 The end of autumn and beginning of winter in North America is always an unsettled time. That Thanksgiving Day falls squarely in this stretch of shortened days is one of those good news/bad news things. Its good to get a break, and renew associations with friends and family. Its bad because I eat too much. Its also bad because the weather can be so unpredictable-almost winter, but not really. On more than one occasion, Ive been lulled into a false sense of security with benign weather on my flight preceding the holiday, changing to apocalyptic just about the time I want to depart for home.

Too, each year, a few of us find a way to bend sheet metal-or worse-during the last few days of November. This year was no different.

My flight before the holiday was about as serene as could be. Widespread high pressure blew away all clouds along my route, providing smooth air, bright sunshine and just a hint of headwind. By staying in the southeast, I thought, Id avoid the bad stuff possible in other areas. Checking weather for the return, I discovered I wasnt immune.

A broad cold front had pushed east from the Midwest, distributing nasty weather up into New England. My route from coastal South Carolina to southwest Florida pretty much defined where the front could be found. Compounding the situation was a mass of moist air moving in from the Gulf of Mexico and working its way northeast, along the front. The combination was generating lots of rain and thunder-thunderstorms in late November?-along my route. The icing on the cake was a 50-plus-knot headwind on either side of the front. They werent forecast before I launched, but tornadoes were in the mix for parts of Florida. Marvelous.

Looking at the radar displays, it was obvious getting on the fronts backside would be the best plan. And thats what I did as soon as I got to cruising altitude. I took a photo of my Garmin 396 about that time; its reproduced below and indicates the widespread area of weather I was able to avoid. The photo doesnt show my true airspeed-about 160 knots-but it does show the groundspeed.

Three boring hours later, it was time to turn the corner. My preflight research indicated the most likely place to find a soft spot in the weather was the Florida panhandle. Watching the 396s Nexrad display while en route confirmed this; it was a matter of when and where to cross the front and how long the rough ride would last. Since I wanted to spend as little time as possible bouncing around, I managed to work a plan with ATC allowing me to actually go slightly beyond my desired soft spot, then turn downwind to penetrate it, picking up a bunch of groundspeed knots in the process. It was still a bumpy ride, requiring me to slow down for a few minutes to make sure the wings stayed on. It also highlighted a fundamental flaw in using airborne Nexrad as a tactical tool, one Ill get to in a moment. After the few minutes it took getting across the front, the rest of the flight was anticlimactic.

Id spent 4+30 covering territory normally requiring only a smidge more than three hours; there were a couple hours of gas remaining on board. Water was dripping from just about every place on the airplane, but the bugs I picked up over the summer were mostly gone.

Despite the too-long afternoon, it was a satisfying flight. The plan I developed before takeoff was easily implemented, included plenty of opportunities for precautionary landings and minimized any issues with traffic in case someone else wanted the same deviation at the same altitude.

However, my satisfaction was tempered when I learned about the loss of an airplane almost identical to mine over the Gulf of Mexico. Two accomplished pilots were attempting to penetrate the front, apparently by flying direct from takeoff to their intended destination. Although the front seemingly had died down, nighttime over the Gulf can be very lonely. Im not aware if the pair had an inflight weather resource aboard.

Their airplane disappeared from radar about four hours after and some 100 or so miles to the southwest of where I had found my soft spot. At this writing, only two small pieces of wreckage have been found.

When I committed to penetrating the front, Nexrad showed my soft spot was mostly dark green, indicating moderate rain. By the time I got through it, that dark green became liberally sprinkled with yellow splotches, including one I flew through. The result was only one enthusiastic bump.

I dont know enough about this accident yet to throw out any lessons it may teach; the NTSB had not yet posted a summary of the event at our deadline. But, along with the unpredictable weather, it does reinforce for me why I hate traveling-by any transportation mode-around Thanksgiving.

Unfortunately, Nexrad isnt perfect. In the five or so minutes between my 396s updates, stuff can happen. Also, theres a time lag between a sites observation and encoding the data for transmission. As a result, I presume what I see in the cockpit averages 15 minutes old, during which the picture can change substantially. Nexrad is a great big-picture, strategic tool. But using it tactically, as I did, highlights its shortcomings.