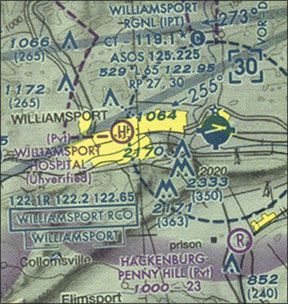 Ive always liked visiting unfamiliar airports; one can learn a lot by watching how other pilots deal with each facilitys different quirks. Its educational. At least the watching is-arriving at an unfamiliar airport can be nerve-racking. Or worse.

My favorite unfamiliar airport story involves the Williamsport (Penn.) Regional Airport (IPT). This night flight was long enough ago that the Piper Aircraft Company still had a manufacturing presence on the field. I was a mere private pilot, working on my instrument rating. Although I was night-current, I took some extra precautions for this flight. I had plenty of fuel, for one thing, along with current VFR charts. Since I also was an instrument student, I brought along a set of approach plates, opened to IPTs airport diagram. I had reviewed the runway layout, made sure someone would be there to greet me and my passenger, and was well within the airplanes weight and balance limitations. The flight went smoothly and soon we were letting down through a clear night sky with the citys lights beckoning. Like a moth to the flame.

Today, the airport has a tower; back then, it either had closed for the night or hadnt been commissioned yet. As we descended, I maneuvered to enter the downwind to Runway 30, which the winds favored, noting the runway layout. As I

settled on to the reciprocal heading, I noticed a dark ridge, seemingly just below me. Lights illuminated houses and towers in the area, which quickly passed beneath my wing. Realizing the ridges proximity, I stopped my descent and flew a high downwind before cutting power and executing a standard turn to base. As we rolled out on final, I was way too high. Pulling off all the power and checking that full flaps were extended, we dove at the runway, but there was no way I could get down and stopped. A go-around was in order.

The second try was similar to the first, except I extended the downwind, giving me more time to descend once I turned base and final. I used up all of the runway getting down and stopped, but get down and stopped I did.

After concluding our business the next day, I looked at that ridge. It stuck up a good 1500 feet above runway elevation. “How do people fly that pattern?” I wondered to myself. It occurred to me to pull out the Airport/Facility Directory (A/FD). Perusing it, the answer became obvious: “Runway 30 is right-hand traffic, dummy; you were trying to fly left traffic. Its a wonder youre still alive.”

These days I pay extra attention to such things as towers and terrain at unfamiliar airports. I also remember the FAA/NACO published airport diagrams dont indicate the direction of turns in the pattern. You need to check the A/FD or other references for that.