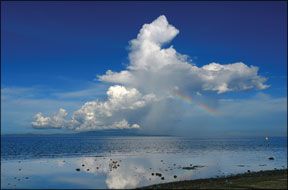 Astute readers perusing the masthead at left will notice a slight change from recent issues: This magazines editorial office address has changed from Virginia to Florida. After a few years of freelancing for this and other outlets, publishing company Belvoir Media Group made me an offer I couldnt refuse to relocate to their offices in Sarasota and join the company full time. Already, my decision to

accept their offer has borne fruit: For instance, Ive become much more familiar with the terms “air-mass thunderstorm” and “high relative humidity.” In the bargain, Im optimistic Ill become less familiar with terms like “icing in clouds and precipitation” and “Washington ADIZ.”

At this writing, my belongings are still being unpacked even as plans for further improvements to this magazine are being developed. Putting me in closer proximity to

Aviation Safetys editorial and art departments promises to help improve not only the magazines content but also its presentation. Among other favorable outcomes, the change affords the many other professionals involved with this titles production a greater opportunity to put their creative talents to use. Im looking forward to the possibilities.

The benefits to you, our reader, will become evident in coming months as we work on several ways to improve our look and feel along with even more incisive examinations of how-and how not-to fly the personally flown aircraft. It should be a fun trip and well worth it.

As this issues deadline approached, the final disposition-if any-of the FAAs ill-considered proposal to impose user fees on general aviation is unknown. Although existing authorizations for the FAA and its programs are set to expire at the end of September, the final outcome of the user fee debate may not be known until well into October, if then.

Two versions of the FAA legislation are moving in Congress, one in the House (H.R. 2881) and one in the Senate (S. 1300). Of the two, the House version lacks user fees; the Senate version would impose them, starting with turbine-powered aircraft.

Before the weight-challenged lady croons, one of these two measures likely will be dropped into an end-of-session “continuing resolution,” forming the basis for the next few years of FAA policy.

One more (last?) time: Nows a good time to ping your Congresscritters and advise them how you feel on this issue. Call them through the U.S. Capitol switchboard (202-224-3121) or access their individual Web sites at

www.house.gov or www.senate.gov. If you dont know who represents you in Congress, both sites will help you figure it out.