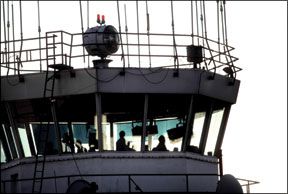 The latest “were all gonna die” coverage of aviation occurred in early March as the general media uncovered an audio recording of a youngster appearing to issue takeoff clearances to airliners at John F. Kennedy International Airport (JFK). On the February 16 recording, JFK tower controller Glenn Duffys nine-year-old son relays takeoff clearances to departing traffic. (Use this link to listen to the recording: http://bit.ly/ccblJD.)

Its obvious the child is being coached: A controller-presumably the father-is heard and, at one point, comments, “Thats what you get guys when the kids are out of school.” One pilot comments, “Wish I could bring my kid to work.” Of course, the general media declared an emergency, with headlines like “Child Directs Planes At New York Airport.” While both the controller/father and his supervisor have been suspended, pilots on the JFK tower frequencies since then have expressed support for the break from monotony.

In fact, none of the pilots on the recording complained; most seemed to enjoy the diversion. The same cannot be said of NATCA, the controllers union, nor Secretary of Transportation Ray LaHood, who commented, “This is a stunning example of a lack of professionalism, not following the rules, not using common sense.” He added, “The idea that a young child would be directing planes in and out of an airport is totally unacceptable.”

For us to suggest the general media and the SECDOT have overreacted to this event would be to condemn all others overreacting to various things. Of course the child did not “direct” traffic. In this event, at least four highly trained professionals were involved in ensuring the appropriate clearances were issued and implemented. Too, takeoff clearances are on roughly the same level as “taxi to the ramp” when considering opportunities for error and misunderstanding.

Anyone, including Secretary LaHood, suggesting the child “directed” traffic displays profound ignorance of the ATC system generally and takeoff operations specifically. Safety wasnt the least bit compromised and even the flight crews seemed to enjoy the diversion.

None of this means we advocate children broadcasting takeoff clearances; far from it. Yes, the tower crew involved displayed an appalling lack of common sense.

But the system is too highly refined for the facts of this episode to have any impact on safety. In addition to their ignorance, those suggesting otherwise are signaling their contempt for the training, experience and professionalism on regular display in tower cabs and cockpits throughout the air transportation system.