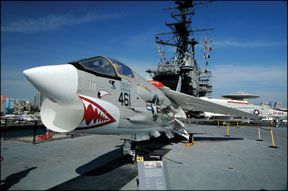 The Aeronca Champs checklist was simple, befitting most small aircraft of the late 50s: “CIGAR” stood for Controls, Instruments, Gas, Attitude, Run-up and, sometimes, Runway. Time and experience brought along more-complicated airplanes and checklists, but it was still hard to mess up by using CIGAR.

the T-37. Its checklist was a bit more complicated. When students asked about checklist sequencing, there was the standard answer: Checklist discipline. Not too much to question, but not too much to mess up, either.

One day, on an out-and-back to the Amarillo AFB, my student and I found ourselves looking at airplanes on the ramp, including two from the Navy; an F-4 Phantom II and an F-8 Crusader. A starting unit was being pushed into place next to the F-4. Its GIB (guy in back) was waiting to apply power by throwing two switches in the rear cockpit. That day, I learned the F-4 checklists include a “before power applied-front cockpit check” item.

There were two switches in an incorrect position. Unfortunately, they were the external fuel tank jettison switches. As advertised, the two 370-gallon outboard external fuel tanks were blown off the wings as power was applied, an event surprising the GIB and the ground crewman. The tanks split open upon hitting the ground, splashing JP-4 onto the starting unit, which started burning. Then the fuel on the ground torched off. The GIB quickly departed the immediate area as flames intensified. The ground handler dropped the draw bar and also departed the area. We retreated also, noticing that the burning starting unit was now rolling downslope toward the F-8. By now, the F-4 was engulfed by fire.

The starting unit continued rolling until it crashed into the F-8s drop tank, which dumped even more fuel. Soon, the F-8 was burning as enthusiastically as the F-4. After a few more seconds, the F-4s internal fuel tanks torched off, adding 4000 more pounds of fuel to the fire, followed shortly by the internal tanks and their 8000 pounds. We backed up a little more. Then, the F-8s internal fuel torched off.

The ramp was now a blazing scene of two burning aircraft, a burning starting unit and burning fuel flowing toward more parked airplanes. The fire trucks arrived too late for the two Navy birds, but they did put out the flowing fuel fire before it reached the other parked aircraft.

We had backed up a bit more during the show. In fact, we now were standing next to the F-4 and F-8 pilots. As my student and I finished, respectively, our warm Coke and cold coffee, we turned toward each other and said in unison, “Checklist discipline!” The Navy guys walked away.