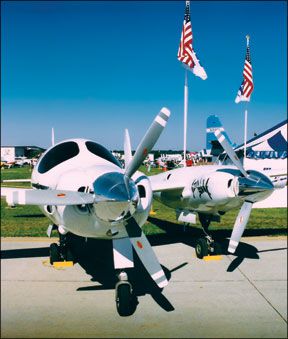 Symmetry. Balance. These concepts are universal to virtually all human philosophy and aesthetics. An aviation credo is that “if an airplane design looks good, it will fly good.” In most cases, “looking good” means having proportions-and symmetry-that please the eye.

We strive for balance and symmetry in the way we fly as well. Pitch attitudes. Bank angles. Airspeeds. Rudder coordination.

Almost everything we do is designed to make maneuvers steady and balanced. Some of the most challenging maneuvers on practical tests make us demonstrate symmetry, with airspeeds, altitudes and bank angles at one point of the maneuver equaling those at others, and balanced rudder input throughout. But there are times when we must violate the concept of symmetry to make the airplane perform. Most notably, this means something other than balanced rudder input.

“Keep the ball centered.” How many times did your instructor admonish and cajole you to coordinate the flight controls? Theres good reason to maintain coordinated flight almost all of the time-to get maximum aircraft performance, and to avoid a cross-controlled stall at slow speeds. But there are times when it makes just as much sense to fly with the rudder out of coordination.

An “intentional slip” is a purposeful uncoordinated maneuver used to lose altitude rapidly without a corresponding increase in airspeed. Slipping uses drag from the side of the fuselage to increase the rate of descent, but since the aircrafts pitch does not change significantly the airspeed does not increase. Slips are most useful for steeply descending over obstacles for a precision landing, whether on a runway (or water) or as part of an off-airport emergency landing. Often associated with airplanes not equipped with flaps, slips are also a good technique in the event of flap failure, or if you choose to land without fully extending them.

You slip by banking the wing and using opposite rudder to prevent turning. The steeper the bank, the greater your rate of descent. Rudder authority limits the amount you can slip-the bank angle permitting a constant heading with full rudder deflection is the steepest you can control.

Of course, there are two basic kinds of slips. In a sideslip, the airplanes longitudinal axis points in the same direction it did before slipping, useful for losing a lot of altitude without airspeed gain. A forward slip skews the longitudinal axis away from the flight path, but permits the airplane to follow the same ground track as before the slip began. This is most useful as a technique to slip to a landing.

Some things you should consider when slipping the airplane include:

Maintaining airspeed to avoid too great an angle of attack on one wing, which can result in stalling that wing and a snap-roll. Note that the pitot tube may not sense accurately in uncoordinated flight, so slipping is a “seat of the pants” maneuver, an art you need to learn and then regularly practice.

Ensuring alignment with the landing surface. Slight slips (the “wing-low method”) are a good crosswind landing technique because they permit you to determine from a distance on final approach whether you have enough control authority to counter a crosswind. In a crab-style approach, by contrast, you wont know until the last moment how much itll take to line up with the runway, or if you have the control authority to do so.

Holding speed as you flare. A common slipping mistake is to release rudder pressure too quickly as you transition out of the slip, increasing airspeed. If you do this as part of a landing flare youll find yourself shooting past your touchdown spot and, if the runway is short, risk running off the far end.

Touching down with no sideways drift. A slip to landing, done right, takes you all the way to the surface with zero sideslip. In a crosswind this results in the preferred technique of touching down on the upwind wheel first.

Other than aerobatic and tailwheel pilots, few use rudder more than those flying multiengine airplanes. If youve just completed your MEL rating or a serious multiengine flight review (or had an engine problem for real), you know how hard your legs work if only one of your engines is running.

One of the ultimate asymmetries is when one engine on a conventionally configured twin (i.e., one engine on each wing) fails. All the power of the second engine tends to roll, yaw and pitch the airplane away from controlled flight; all the drag of the “dead engine” side only makes it worse.

Where the pilot of a single-engine airplane or a centerline-thrust twin need only control pitch for airspeed to maintain safe flight in the moments after an engine failure, the pilot of a conventional twin needs to control pitch, bank and yaw, in the correct proportions, and all at the same time. At the onset of engine failure, the multi pilot uses rudder as the primary directional control. As long as pitch is correct to provide airspeed and therefore rudder authority, its the asymmetry of rudder input that will save the pilots life.

After “mixture, prop, throttle, identify, verify, feather” is done, youll find yourself in another situation where asymmetry is good. Feathering a propeller dramatically reduces drag on the “dead” engine side…but there is still drag, and there is still asymmetric thrust. Keeping the wings level and the slip/skid ball in the center in single-engine flight is not the thing to do; in a realm where even the maximum available capability is quite marginal, it takes some control asymmetry to eke out the best possible performance.

In our discussion of slips, we noted the performance effect of drag from the side of the fuselage. If we need maximum climb performance (or reduce descent to its minimum if conditions prohibit climb), we need to avoid side-slip drag. In normal operations, flying with the wings level and the slip/skid ball centered results in zero-sideslip flight. With one engine dead in a conventional twin, however, zero-sideslip results from a different set of control inputs. Keep the ball centered on one engine in a twin and youll get something less than optimum performance-at a time when “optimum” may be barely enough.

In certification testing, aircraft manufacturers are required to determine VMC speed under worst-case conditions. The rules for this testing require the airplane be banked no more than five degrees into the “good” engine, with the slip/skid ball deflected no more than half the balls width. These standards lead to some confusion about what is optimal for performance on one engine…it is not necessarily five degrees bank and one-half a ball width. In fact, some airplanes get maximum performance with much less deflection than that.

You have to learn from the experts on each airplane model, including any guidance from the manufacturer. And youll need to experiment a little to adjust for conditions of airplane weight, remaining power and density altitude if and when an actual failure occurs. Be sure to take a qualified instructor with you on a good-weather day when you do your experiments.

There is no cockpit instrument that tells precisely when the airplane is in zero-sideslip flight. The closest we get is the vertical speed indicator-if configured for single-engine flight, the maximum upward (or minimum downward) vertical speed occurs at zero sideslip. Pilots must apply some bank and rudder ball into the “good” engine to approximate zero-sideslip, then adjust as necessary to get the absolute most out of the airplane.

Some training organizations tape a yaw string on the nose or windscreen of a twin, a simple piece of yarn that indicates zero side-slip if it is blowing in complete alignment with the airplanes centerline. You might consider making a yaw string a permanent feature of your multiengine airplane. For more on flying a single-engine twin, the geometry behind it all and an indication of what the yaw string should present, see the sidebar on page 19.

Symmetry. Balance. People strive all their lives to achieve some measure of each. Our ideas of perfection and beauty are centered on these concepts (in fact, “centered on” is an expression of the desirability of symmetry). Philosophy aside, there is a case for symmetry in airplane design and operation…most of the time. But there are also situations where the best performance comes from the unlikelihood of asymmetry in action.