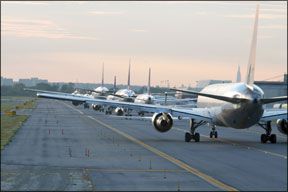 Alot has been said elsewhere about recent articles appearing in USA Today questioning federal, state and local investment in airports lacking scheduled service. The articles imply airline passengers are subsidizing general aviation airports and people traveling by air for worthwhile purposes only use the scheduled

services provided by airlines; all other types of air transportation and airports lacking scheduled service are frivolous and unworthy of investment.

The industrys alphabet soup has done an okay job of responding to these articles. I say “okay” because there is so much more to do, including going on offense, instead of once again adopting the defensive posture seen all too often. Its axiomatic that few people who read the initial articles saw the industrys response: Once something is “out there,” its out there. Of the many things omitted from McPapers attack on GA, heres another: The airlines themselves dont pay to use the infrastructure supplied by the federal government.

Clearly, the vast majority of federal funds used to build and maintain airports, operate the ATC system and support the FAA come from taxes paid by airline passengers. There also are taxes on air cargo and the non-commercial aviation fuel, Jet-A and 100LL, used by general aviation. This is analogous to surface transportation, where truckers, bus companies and other concerns using highways for profit pay a fuel tax for the privilege. As a rule, the fuel taxes they pay are tax deductible, as a cost of doing business.

When it comes to the airline companies, theyre not paying anything to use the airspace; their passengers are. At airports, they pay landing fees, charges for gate and concourse space rental, and incur other costs, but all of these expenses are deductible. In other words, taxpayers subsidize businesses using federally funded air and ground infrastructure.

We can-and a lot of people would want us to-spend a lot of time arguing about whether the minuscule share of federal funds allocated to reliever and GA airports is money well-spent. The same is true when considering the incremental costs GA imposes on the ATC system.

But, for many reasons, any arguments that GA is being subsidized by airline passengers overlooks the largest recipient of federal aviation subsidies: the airlines themselves.