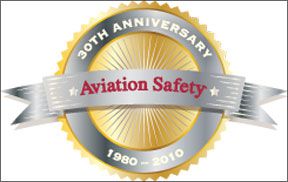 I know this will come as a shock to many of you, but its full-bore winter in North America. Being warmly ensconced in Florida for the past couple of years, I had forgotten about the seasons treachery. A recent early-December round-trip up the coast to D.C. brought back vivid memories, as well as a wide range of weather.

Starting out, there were low ceilings, decent tailwinds and widespread convective activity over central Florida. The front-inspired rain was mostly moderate in intensity, and there were a few bumps, but there wasnt anything in it all to be overly concerned about.

Later, motoring along near Savannah, Ga., at 11,000 feet in IMC, I happened to notice my strobes illuminating raindrops. A glance at the OATs 33 deg. F reading had me dancing in my seat for the few miles XM WX accurately depicted it would take me to fly out of the rain. Except for the blessed 40-knot tailwind, the rest of that leg was uneventful.

The get-back also was drama-free, but it started out differently. It snowed all day before my planned departure, although with little accumulation. The airports management did a good job keeping pavement clean; the biggest challenge was ensuring the airplane would be free of ice and snow when I wanted to depart. Another project was warming the engine before starting.

The FBO I chose came through with a heated hangar the night before departing, which resolved both problems. After starting, lengthy idling before takeoff ensured the oil and engine innards were warm enough to apply full power. See page 13 for some additional thoughts on pre-heating your airplane and engine.

Of course, winds at altitude were howling from a direction translating into a substantial headwind for the flight home. But weather all along the route was excellent VFR, so I stayed low and managed “only” a five- or 10-knot hit for most of the trip south.

In addition to reminding me of the vagaries of winter, the trip reinforced the value of personal airplanes: There simply was no way I could have made the trip on the airlines, given the schedule I had and the relatively short amount of time available. It was all good.

Astute observers by now will have noticed the curious logo on the cover, which also is reproduced below. Yes, this issue begins the magazines 30th year.

No, weve not been around as long as some of the other, flashier publications. And, yes, many others who came before me deserve the lions share of credit for sticking it out for all those years and helping develop this title into something not even I could unravel.

Most important, recognition goes out to our loyal readers-more than any other group, you are the ones who made this possible. On behalf of the Belvoir Aviation Group, our sincerest thanks for the trust and support you have shown us.