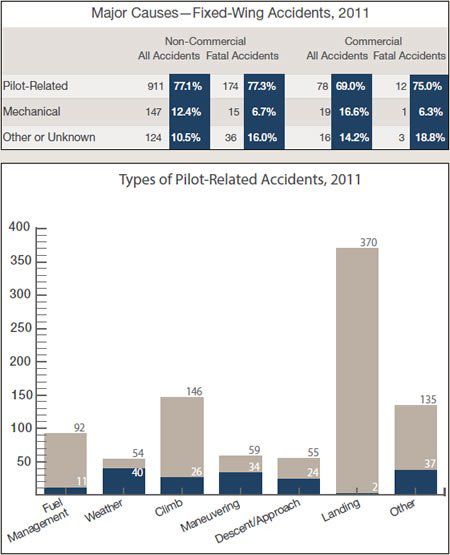 To obtain a better picture of LOC accidents and their root causes, I looked at fatal GA accidents in 2011, long enough ago that NTSB final reports are available. I used the NTSB’s Web-based database (www.ntsb.gov). I confined my search to U. S.-based Part 91 fatal accidents and excluded amateur-built aircraft and Part 135 accidents. In the word search box, I used the term “loss of control.” The search turned up 47 accidents, each including a factual report and a probable cause finding. I reviewed both for all 47 accidents.

My intent was to determine whether the hazard(s) precipitating the accident could have been identified by the pilot and then assessed and mitigated, possibly preventing it. I broadly labeled such an accident as having poor risk management as its main root cause. If no significant hazard(s) were identified, or the pilot could not have identified them and would have lost control of the aircraft anyway, the accident was labeled as skill-related or resulting some other non-risk management-related reason.

The 47 accidents ran the gamut of typical GA fatals. In terms of conventional accident analysis, they include a wide range of events associated with the final loss of control, including VFR into IMC, unwarranted low flying, turbulence and wind, in-flight icing, fuel exhaustion, over-gross operation, power loss and other typical GA fatal accident scenarios.

I used my standard, subjective risk management test: Was the hazard detectable by the pilot and could he/she have assessed the risk and mitigated it to a lower level of likelihood or severity, perhaps avoiding the accident altogether? If the answer was “no,” the accident was skill-based or resulted from something other than poor risk management. In conducting this analysis, however, I found the data was insufficient to make a reasonable determination in 10 of the 47 files.

Of the 37 remaining accidents, I found 30 (81 percent) met my test for being labeled an accident with a root cause of poor risk management. That is, the pilot could have identified the hazard and prevented the accident through common risk-management techniques.

I concluded the other seven accidents resulted from deficiencies in basic pilot skills. These conclusions did not surprise me. In previous analyses (Aviation Safety, March 2012, “Analyzing Fatals”), I found that anywhere from two out of three to four out of five GA accidents are due to poor risk management as a root cause.