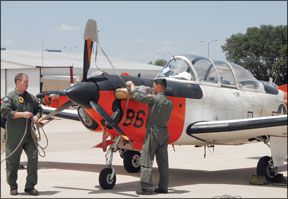 For most general aviation pilots, military aviation is something of a mystery. The equipment usually is different-though many civilian designs have been placed in military service-and its the rare GA pilot whose mission involves dropping or

Of course, the process of taking someone off the street and turning them into a pilot commanding several million dollars of often-lethal hardware-after only months of training and a few hundred hours of flight time-is much more refined than most civilian flight training.

But military aviation can offer several lessons for general aviation, especially when considering risk management. And while civilian operations also are vastly different from the militarys, that doesnt mean the transfer of valuable lessons is one-way. After years of Marine Corps flying, I recently “transitioned” to general aviation. I learned a few things worth sharing.

By way of explanation, a brief comparison of military and civilian flight operations can help here. When compared to civilian operations, the mission can be as different as night and day and, for the most part, no one is shooting at you as youre practicing Lazy 8s or no-flap landings. On some occasions, the mission can be identical. On all occasions there is only one mission that is exactly the same: The number of takeoffs must equal the number of landings every flight, every day you fly.

The major difference is what happens before the first takeoff. In a Marine squadron, there is an entire department (Operations) that schedules, coordinates, plans and reviews a flight beginning weeks before and continuing right up to the point at which the chocks are pulled. The flight schedule is distributed to all departments and a final review is completed by the squadron Sergeant Major and Executive Officer prior to the Commanding Officer signing for and taking full responsibility for the proposed flights.

Another department (Safety) reviews the aircrews medical certifications, instrument and aircraft-type qualifications. The Safety Department reviews crew-rest requirements, life stressors that may be involved, as well as the lifestyle of the proposed aircrew.

The Maintenance Department takes full responsibility for all maintenance facets of the aircraft. Entire teams of experts in avionics, hydraulics, engines, flight controls and airframes work on and correct all deficiencies prior to each flight.

The Quality Assurance Department oversees and inspects the entire maintenance process. Each aircrafts discrepancy book is meticulously inspected and maintained by the Maintenance Administrative Department. Only then does the Maintenance Controller release the aircraft as “safe for flight.”

Before the day of the proposed flight, the pilots involved are identified and-depending on the size of the mission-get together to review, plan and prepare a detailed mission briefing for it. At times, mission planning times can be reduced to as few as six hours, but can take days to be completed.

When the day of the flight arrives there is an Operations Duty Officer (ODO) assigned to the Ready Room. The ODO is responsible for ensuring all aircrew are present for the briefing, displays and discusses all weather information, as well as the Notams for the proposed flight. The ODO also will contact other squadrons to prevent conflicts in training areas and obtain information on the other squadrons operations.

After a detailed flight brief, which may take as long as two or three hours-a very detailed weight and power requirements worksheet is completed using the ambient temperatures, density and pressure altitudes, plus weight of the aircraft for the departure location as well as the proposed operating area.

To finalize the brief, a detailed Operational Risk Management (ORM) worksheet is completed by each aircraft commander. The worksheet allows the pilot to review various risk factors associated with the flight and include factors in the aircrews life that may be stressors. All risk is identified and the pilot is asked how to best mitigate that risk. All in all, its a very exhaustive process involving over 100 people, which takes place for each and every flight.

Meanwhile, On The GA Ramp

On the light-GA side of aviation, these various roles, activities and briefings all are completed by one person, who could be a private pilot with as few as 40 hours of flight time. The GA pilot checks the weather, ensures all medical certification and qualifications are properly documented, completes the aircrafts preflight inspection, as well as all mission planning and briefing, and ensures mission execution is done safely.

The point is GA pilots have a huge amount of responsibility on their individual shoulders and few resources readily available on which they can rely. Often, the only checks and balances applied are self-generated ones. They can come in a variety of ways: from more-experienced peers through the training process, via the flight instructor, be instilled by a mentor or learned the hard way, after a mishap or other event serving as a “wakeup call.”

Is there a difference between GA and military flight planning? Surely there can be. The missions briefed in a squadron ready room may involve multiple aircraft, restricted or prohibited airspace, various weapon systems and night-vision systems-for just a few examples-plus there also can be the element of trying to figure out what the bad guys want to do.

In the GA pilots world, the mission at hand may involve a daytime VFR sightseeing trip with your spouse, rather than a low-level mission over hostile territory to deliver troops to a battlefield. A big difference on one level, but on other levels-save a few hours of mission planning and briefings, and getting shot at-the basic elements should be the same. The bottom line? If either the military pilot or the GA pilot fails to check the weather, the Notams, do some fuel planning and do a weight and balance calculation, the end result can be the same: bent metal and/or loss of life.

Discussions of the relative merits of high- versus low-wing airplanes-or even the FAR/AIM-usually arent found in a Marine Corps squadrons ready room. For a military pilot walking into a civilian, light-GA flight operation for the first time, the differences can be stark. As one example, much of the aforementioned paperwork has been prepared in previous days and weeks by a vast array of support personnel. In its GA counterpart, the often-minimal paperwork and planning usually is conducted by one person, sometimes two. In fact, lets just say walking into the typical FBO or training organizations flight planning room can be a very humbling experience for a military aviator.

There are other differences of course, including the flight-training ladder most civilian GA pilots have climbed. After flight school, a Marine Corps Aviator receives a commercial certificate and instrument-airplane and rotor-wing ratings from the FAA. Lazy 8s, rectangular landing patterns and reciprocating engine theory are subjects not taught. The military pilot without any previous civilian experience who wants to transition into personal airplanes has a few gaps in his or her knowledge. Put simply, after many years of high-performance fixed- and rotary-wing aircraft, plus thousands of hours of military instruction, civilian methodologies and terminology eludes the military aviator.

One might think getting in a single-engine, 180-hp Cessna after all that training would be easy. But, it can be completely foreign and, after many hours of both ground and flight instruction, a military aviator can eventually obtain CFI certification from the FAA. The result? The wizened Marine Aviator is the newbie CFI at the local FBO. In the door comes something, or, someone, he has never met before: the civilian student pilot.

A flight instructor has an awesome responsibility to both demonstrate and teach this sense of detailed planning to the student pilot. Meanwhile, as a student or certificated pilot, you have a responsibility to do these things every time you plan on getting airborne.

On those rare occasions when the FAA ramp-checks a GA pilot, the things examined often are limited to a check of identification, pilot certificate, current medical certification and the aircrafts documentation. The FAA or NTSB checks all other items (fuel planning, weight and balance, weather/Notam briefing, life stressors and the aircrafts maintenance status, among other factors, as part of the post-accident investigation. By then, its too late!

As civilian pilots, we all have a tremendous amount of freedom to come and go in our aircraft pretty much as we please. But with all great freedoms also comes substantial personal responsibility to do the right thing, even when we think no one else is watching. This point is made because there are both excellent and absolutely horrendous examples of how some GA pilots handle this responsibility. Those are for another article.

Much of the foregoing may not be new; some of it may be revelatory. The point is the stark contrasts between the highly organized-some would say “bureaucratic”-was in which the military goes about readying for a flight when compared to the average GA pilot. By highlighting these contrasts, maybe we all can be more proficient and safer aviators.

Those of us in the military stand in awe of the amount of information, time, effort and dedication GA pilots have for the art and skill of flying. Military aviators certainly do not have all the answers and, like all truly good pilots, we are always continuing to learn and develop our skills.

After seeing both sides of the street-military and GA-the one overriding aspect of both worlds is the tremendous responsibility resting on the pilot in commands shoulders, whether he or she is an Air Mission Commander leading a flight in harms way or a student pilot on his or her first solo.

Hugh V. Tillman is a former Marine Corps Squadron Commanding Officer with over 4000 hours in both multi-engine turbine helicopters and airplanes. He holds FAA ATP, CFI-I, (airplane and helicopter) and MEI certificates and is a former Aviation Safety Officer, and Weapons and Tactics Instructor.