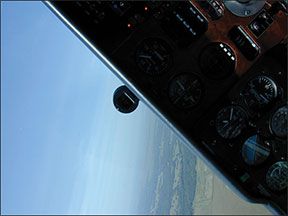 Every primary student who’s at least been ready to solo has experienced a few stalls and recoveries. If they’re lucky, they also are introduced to different kinds of stalls, and how the ways we enter them can help determine their characteristics. Along the way, we learn ways to recover from them. We learn these maneuvers for three reasons: So we’ll recognize, avoid and be able to recover from them.

At least in my experience, it’s not the simple, straight-ahead, power-off stall that poses the greatest risk to complete loss of control. But when some or all of a wing’s critical angle of attack (AoA) is exceeded in attitudes other than straight and level, stalls get more interesting, Variations on the simple stall—including accelerated, cross-control and elevator-trim—are where the greatest risk of losing control can be found. We’ll call them “advanced stalls.” Also in my experience, pilots are more likely to encounter these stalls than we are the more-benign, straight-ahead, power-off variety.

Common Factors
Of course, stalls occur when we exceed the wing’s critical AoA. One of the characteristics of some advanced stalls is that the likelihood of only one wing stalling is greater than both of them stalling at the same time. That’s because it can be more difficult to maintain coordinated flight when demonstrating an advanced stall, and the tolerances are tighter: Even if a turn is only slightly out of coordination, the effects can be dramatic.
Whichever wing is experiencing the greatest AoA will stall first. With the other one developing lift, over you’ll go, rolling in the direction of the stalled wing. One result can be a spin. But if the turn is accurately flown, without yaw, the airplane simply will pitch down as if it were in a straight-ahead, power-off stall.

Another common factor in advanced stalls can be altitude loss. Any time an abrupt maneuver results in a stall, it probably will be with power on, and stalling with power on typically means everything about the stall happens more quickly. This includes losing altitude, especially if an incipient spin develops.

A final thing these so-called advanced stalls have in common can be lack of formal warning. Conventional stall warning devices usually work quite well, but any time you find yourself getting slow, with power on and in, say, 30 degrees of bank or more, you need to stop and think about your wing’s AoA. Moreover, the traditional buffet many airplanes exhibit when nibbling at a straight-ahead stall simply may not occur in an advanced version. That’s because things happen quickly and, when abused, a wing can go from flying to stalled before you realize what’s happening.

Accelerated Stalls
If your first thought upon hearing of an “accelerated” stall was something like, “How can it stall if it’s accelerating?” welcome to the club. In fact, an aircraft experiences two types of acceleration. There’s the acceleration in airspeed, but there’s also accelerated g loading. This is one of the fundamentals of accelerated stalls: The airplane is experiencing higher-than-normal g loading, usually resulting from relatively steep banks or abrupt maneuvering.

The thing with accelerated stalls is they can occur at an airspeed much higher than expected. For reference, the chart on the opposite page describes the relationships between bank angle, g-loading and stall speed. The FAA’s Airplane Flying Handbook (FAA-H-8083-3A) says, “At the same gross weight, airplane configuration, and power setting, a given airplane will consistently stall at the same indicated airspeed if no acceleration is involved. The airplane will, however, stall at a higher indicated airspeed when excessive maneuvering loads are imposed….” Stalls resulting from “abrupt maneuvers tend to be more rapid, or severe, than the unaccelerated stalls, and because they occur at higher-than-normal airspeeds…they may be unexpected by an inexperienced pilot.”

A traditional accelerated stall demonstration is begun from a level flight attitude at reduced power and at or below VA. Roll to the desired bank angle and smoothly, firmly and progressively increase back pressure to maintain altitude and increase the wing’s AoA until a stall occurs. The turn’s radius will decrease as airspeed drops from the increased g loading.

With the accelerated stall, you’re essentially demonstrating what can happen in an improperly executed steep turn, stall/spin recovery or abrupt pullout from a steep descent. That’s because an accelerated stall can occur any time “excessive back-elevator pressure is applied and/or the angle of attack is increased too rapidly,” according to the Airplane Flying Handbook.

Recovery from an accelerated stall is rather like any other: Release back pressure on the pitch control and increase power. This has the effect of reducing AoA and moving it further away from its critical point. It’s likely a wing will drop, since coordinating such a turn is difficult. If this occurs, add to your recovery procedures a coordinated turn to a wing-level attitude. The idea of an accelerated stall demonstration is to recognize an imminent stall and take steps necessary to prevent it, including relaxing back pressure, rolling wings level and/or adding power.

Cross-Control Stalls
Once at or (preferably) below the airplane’s design maneuvering speed (VA), a classic demonstration of the cross-control stall is to ease in right rudder as you apply left aileron, smoothly reduce power and keep the nose above the horizon. This kind of stall is likely to occur if you get out of shape during a turn from base to final. Once a pilot overshoots the centerline, the correct fix is to increase the turn rate with coordinated control inputs. Or go around.

But a cross-control stall can result if the combination of low altitude and poor training tricks a pilot into holding a constant bank angle while trying to increase the turn rate with additional rudder input. Adding inside—toward the direction of turn—rudder causes the relative wind past the outer wing to increase, creating more lift.

But too much roll is a bad thing. Countering that greater lift and resulting roll moment in the direction of the turn means opposite aileron input. Drag produced by the down-deflected aileron on the inside wing reduces the relative wind’s speed and the lift the wing is generating. The result is a turn with rudder applied in the direction of turn but with opposite aileron, plus additional back pressure to maintain the desired descent rate in the resulting skid.

This further causes the airplane to roll. The roll may be so fast that it is possible the bank will be vertical or past vertical before it can be stopped.

The Airplane Flying Handbook again: “In a cross-control stall, the airplane often stalls with little warning. The nose may pitch down, the inside wing may suddenly drop, and the airplane may continue to roll to an inverted position. This is usually the beginning of a spin. It is obvious that close to the ground is no place to allow this to happen.”

Preventing this kind of stall typically means flying concise traffic patterns. If you get out of shape in the pattern—thanks to traffic, wind or poor technique—the smartest thing to do is execute a go around rather than try to salvage the approach.

Elevator-Trim Stalls
The classic example of an elevator-trim stall is when executing a go-around after a balked landing. The airplane is trimmed nose-up for the approach’s reduced airspeed, and when full or go-around power is added, the nose pitches up, way up. If the pilot doesn’t push—hard!—to get and keep the nose down, an excessive AoA will stall the wing. That’s a bad thing close to ground, as likely will be the case when initiating a go-around.

The cure is two-fold. First, don’t add full or go-around power abruptly when initiating the go-around. Instead, add enough power to arrest the descent and begin climbing, then re-trim the nose down. Once a climb is established, begin adding nose-down trim (or removing the nose-up trim, however you prefer to visualize it) until the pitch angle and control forces return to that used for normal climbs. Second, use both hands if you need them, but the nose needs to come down and stay down. If you’re truly concerned about losing control in this situation, reduce power and trim off the nose-up moment before adding it back and achieving a climb configuration.

An elevator-trim stall is little more than a power-on stall. The essential difference is that, when demonstrating a power-on stall, the nose-up attitude typically is provided by pulling on the pitch control. With a for-real elevator trim stall, that won’t be necessary: The nose-up pitch input is being provided by the trim setting. Get rid of that, or push hard to overcome it, and you easily can recover.

Understanding, recognizing and—ultimately—preventing advanced stalls means not placing your airplane in a position from which it’s easy to enter one. That means no steep turns when flying slowly, always flying with coordinated inputs so no slips or skids can occur, and managing power application with a healthy push on the pitch control when initiating a go-around.

Failure to recognize and recover from one of these stalls can lead to a spin or an unusual attitude. Close to the ground, as some of these recipes for advanced stalls imply, is no place to be out of control.

If you want to go out and practice advanced stalls, here are a few things to remember:

Slow Down
Unlike with the straight-ahead, power-off variety, practicing an advanced stall usually requires some power and airspeed. As with any maneuver, there can be too much of a good thing. Never set up for one of these stalls at greater than the airplane’s VA for its weight. Ideally, you’ll be even slower, so the stall occurs well before any risk of damaging the airframe from higher-than-normal g loading.

Have plenty of altitude
The cross-controlled stall generally is encountered close to the ground, during the turn from base to final, while the accelerated stall can happen any time the airplane is maneuvered abruptly. In any case and thanks to the increased kinetic energy involved, these stalls can result in greater altitude loss than a more benign power-off stall. An extra couple of thousand feet won’t hurt.

Got approval?
The airplane you’re flying may not be approved for demonstrating these advanced stalls (even if it can get into one), or may be approved only under certain conditions. Check the airplane’s limitations and placarding before heading out.