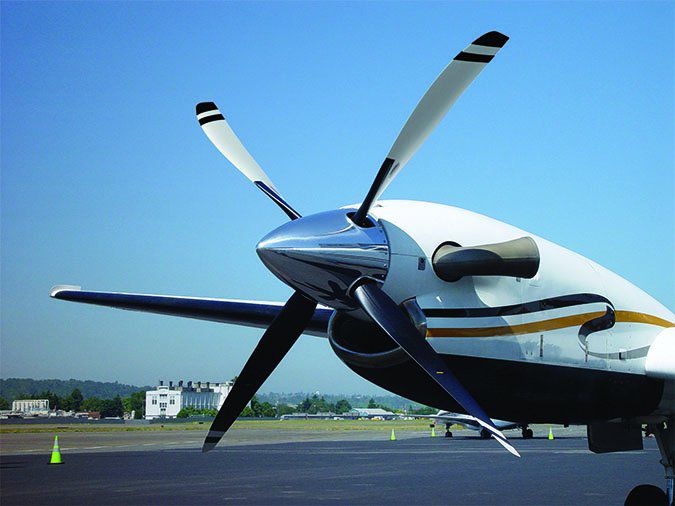 Most of us flying airplanes do so behind, between or otherwise near one or more propellers. From our training, we know basically what they do and how they do it, and the fundamentals of their care and feeding. We also know how to control them, but that’s likely to be the extent of our training and expertise.

It’s a good thing, then, that the modern propeller can be relatively bulletproof, at least as long as it touches nothing but air while working. They demand regular inspection, of course, but the typical installation requires little ongoing maintenance. Of course, when considering airplane components that don’t demand much attention, we sometimes lose sight of their characteristics, and how they can be modified to suit our operations.

Boiled down to the basics, there are two kinds of airplane propellers: fixed-pitch and everything else. With a fixed-pitch prop, of course, the pilot can’t change the angle at which the blades are aligned with the hub and thereby adapt it to situations involving variations in power and airspeed, both of which can influence a propeller’s efficiency.

Depending on an operator’s needs, a fixed-pitch prop can be designed to maximize cruise speed or climb performance, but not both. In fact, it will be most efficient at only a specific, optimized rpm. At all other rpm settings, performance will suffer. The result found on the typical personal airplane usually is a compromise between allowing the engine to turn at its best-power rpm (climb) and creating the greatest forward momentum (cruise).

Fixed-pitch propellers can be made out of almost anything, with wood, aluminum and composites being the most popular. Their benefits include low manufacturing costs and simplified inspection/maintenance/repair/replacement, plus light weight. They also don’t require a governor and its control system, or a quantity of additional engine oil to be carried.

The “everything else” category includes three basic sub-types: the constant-speed variety, whether hydraulically or electrically controlled; the ground-adjustable kind; and what I’ll call “controllable-pitch” propellers, with two or more preset pitch angles, usually electrically controlled, also. The most popular of the non-fixed-pitch types, hands-down, is the hydraulic constant-speed propeller. It’s the kind you’ll likely find on high-performance singles and light twins up to popular turboprops like the King Air pictured above. Constant-speed props generally have an alloy metal hub while their blades can be aluminum or composite.

In all cases of a non-fixed-pitch prop, its blades rotate, or pivot, in the hub. Doing so changes its angle of attack (AoA) since a propeller blade is an airfoil, and is subject to the same basic aerodynamics as a wing. Changing AoA also changes the amount of “lift” produced. But a prop blade’s AoA changes not only when it pivots in its hub but also when the airplane accelerates or decelerates. Forward progress changes the blade’s AoA, whether we want it to or not. This is depicted by the image in the sidebar above.

The beauty of a constant-speed propeller is its blades automagically seek a set pitch angle, which varies according to the pilot’s actions. For the high rpm necessary for full engine power, the blades are rotated to a relatively flat, or low, pitch. Pilots flying a constant-speed prop who reduce engine rpm by pulling back on the prop control are really increasing the blades’ AoA. The engine’s rpm slows as the AoA increases because the greater amount of air being turned into thrust exerts greater drag on the blade, which places greater load on the engine.

The typical constant-speed prop is hydraulically controlled, using engine oil as the pressure fluid. A governor with an internal pump both increases the oil’s pressure and modulates it. A constant-speed propeller’s blades can be infinitely adjusted between their low-pitch, high-rpm and the high-pitch, low-rpm limits.

All of which is in contrast to a ground-adjustable prop, found primarily on lighter aircraft like LSAs and Part 103 ultralights. The principle—changing the blades’ AoA—is the same, but a wrench or other tool is used while on the ground, rather than a prop control linked to a governor. Basically, a qualified pilot or mechanic sets the prop blades to the desired pitch angle, depending on what the next flight’s demands may be: a gross-weight flight from a short runway may demand a high rpm, low pitch setting but cruise airspeed will suffer. A lighter craft with plenty of runway could see a lower rpm, higher pitch angle on the blades, allowing for greater cruise speed but relatively reduced takeoff performance. The allowable blade angles may be preconfigured by the manufacturer or, within obvious limits, left to the operator.

A controllable-pitch propeller, meanwhile, also works by changing the blades’ AoA while airborne and controlled by the pilot, but instead of being infinitely variable, there may be only two or three choices. The low-pitch, high-rpm takeoff setting is mandatory, allowing the engine to develop full power. At least one additional setting is available, for cruise.

As its name implies, a fixed-pitch propeller has no moving parts: it’s bolted to the engine crankshaft and when attached to a direct-drive (i.e., not geared) engine, turns at the same rpm as the engine. Other propellers, as we’ve discussed, are more complicated. All of them, though share some basic considerations for their inspection and maintenance.
During your preflight inspection, examine the prop blades for damage. Dents, nicks, erosion, etc., can develop to the point the blade fails, creating an imbalance and ruining your day. Consult a mechanic if there’s a question. While you’re there, check the spinner and backing plate (if any) for security and cracks.

Numerous problems begin with an oil leak in the propeller hub, including cracks and failed fasteners. Look also for oil streaming along one or more blades. Some props have grease fittings and require regular attention. Others have red dye in the hub to help alert operators to leaks.
Wipe down the prop and its blades with a clean, oily rag from time to time to help prevent corrosion. Wax the blades to keep their paint looking fresh. And there’s nothing that says a private pilot or better can’t repaint his or her prop under the preventive maintenance provisions of Part 43, Appendix A. Be sure the back side of the blades gets a black color to minimize possible glare and that the front side of the tips are painted to enhance their conspicuity. And as depicted in the images at right, periodically balancing a propeller—especially after it and/or the engine have been overhauled—can have many benefits, not least of which is overall smoother operation.