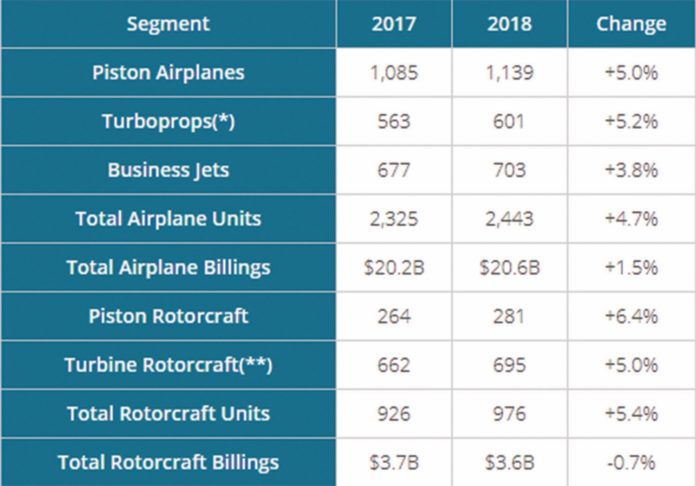 Last year was a good one for general aviation manufacturers. According to the airframers’ trade association, the General Aviation Manufacturers Association (GAMA), global airplane shipments increased 4.7 percent in 2018, to 2443. Billings—what you and I pay for a new aircraft—increased 1.5 percent, from $20.2 billion to $20.6 billion. Meanwhile, worldwide rotorcraft shipments also rose—by 5.4 percent—from 926 to 976 units. The only disappointment in the year-end was that rotorcraft billings decreased slightly, by 0.7 percent, possibly reflecting growing demand for less-expensive training helicopters.

Notable from this data is that piston airplane deliveries increased by 5.0 percent, to 1139 units. Turboprop airplane shipments also increased, to 601 units. Business jet deliveries improved, from 677 to 703 units. There were 281 piston rotorcraft deliveries compared to 264 in 2017. Preliminary turbine rotorcraft delivery data shows a 5.0 percent increase, to 695 shipments. (GAMA cautions that fourth-quarter 2018 numbers from Italy’s Leonardo Helicopters were not available at their deadline—the final rotorcraft numbers could change.)

“This is the first year since 2013 that we’ve seen all segments up in deliveries,” said GAMA President and CEO Pete Bunce. “New certifications over the last two years, especially in the lighter jet segments, as well as demand in North America are driving the business jet shipment increase. This is also the second consecutive year in which shipments of piston and turbine rotorcraft are up, driven by the introduction of new models to the market,” Bunce added.

At the time of the association’s announcement, an annual event, any consequences of the recent federal government’s partial shutdown were not yet known, Bunce said. That’s important because many of the FAA’s normal operations, including new aircraft registration and type certification, were placed on hold during the shutdown.

“While impacts of the U.S. partial government shutdown are still being felt and assessed, we remain optimistic given recent type certifications and other certifications in the product queue that bode well for the large airplane segment to continue its strength,” continued Bunce. “Also encouraging is the demand for specific aircraft types we’re seeing in North America, the Asia-Pacific and the Middle East and Africa regions.”

Still, 2443 new aircraft is a far cry from the industry’s heyday of the late 1970s, when GAMA’s numbers show 17,811 new aircraft were shipped in 1978. That’s not a typo. Of them, a whopping 14,398 were single-engine piston airplanes (and we’d guess the majority of them are still flying). Indeed, the 1978 shipment number for piston-powered multi-engine airplanes—2634 new piston twins that year—easily exceeds 2018’s 2443 shipments of all aircraft types.

The table below, from GAMA’s press release announcing the year-end numbers, summarizes the new data and compares 2018 to 2017.