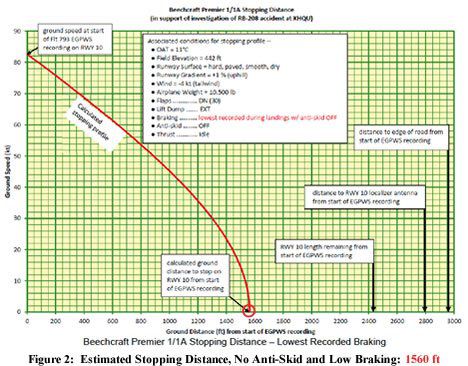 Beechcraft calculated stopping performance for several scenarios related to this accident flight. The manufacturer concluded the estimated stopping distance for the accident airplane with no antiskid system operative and the lowest braking action recorded would be about 1560 feet, based on the first speed recorded by the EGPWS, which was 83 knots.

Based on the EGPWS data, the pilot did not stop the airplane within the first 2900 feet of Runway 10. The go-around was initiated with more than 2400 feet of hard surface remaining (the actual touchdown point was not recorded and could not be determined). The performance study indicated the lift dump system remained extended during the go-around attempt.