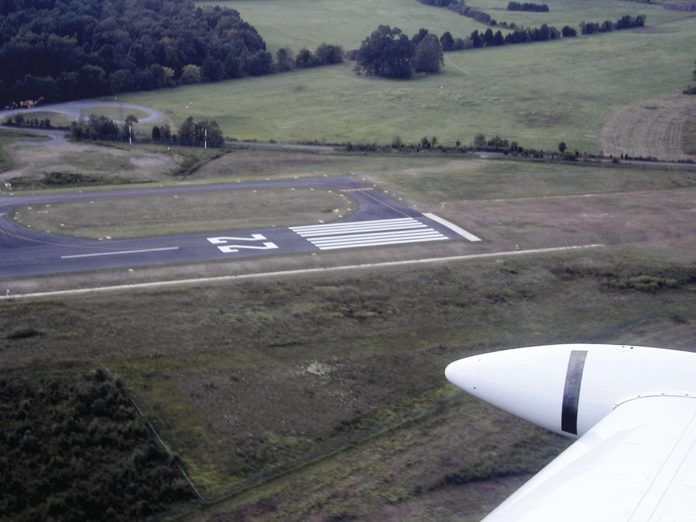 The question is as old as the powered aviation itself: Assuming a single-engine airplane, if power is lost immediately after takeoff, should you land straight ahead or try to get back to the airport? This magazine has often addressed the question, including a January 2006 article by spinmeister Rich Stowell. Rich detailed the results of a simulator-based study examining “the feasibility of successfully executing a 180-degree turnaround following an engine failure at 500 feet agl.” The study concluded that practicing the maneuver boosted its success rate, but landing straight ahead (or nearly so) had a higher success rate.

For decades the FAA tried to make the decision for us, dubbing the return-to-runway attempt “the impossible turn.” It’s never worth the risk, the FAA told us. Yet, current FAA guidance still requires instructors to train pilots on maneuvering back to the runway in the event of engine failure. Should we land straight ahead, or turn back to the runway? Is returning to the runway following a power loss after takeoff an all-or-nothing decision? 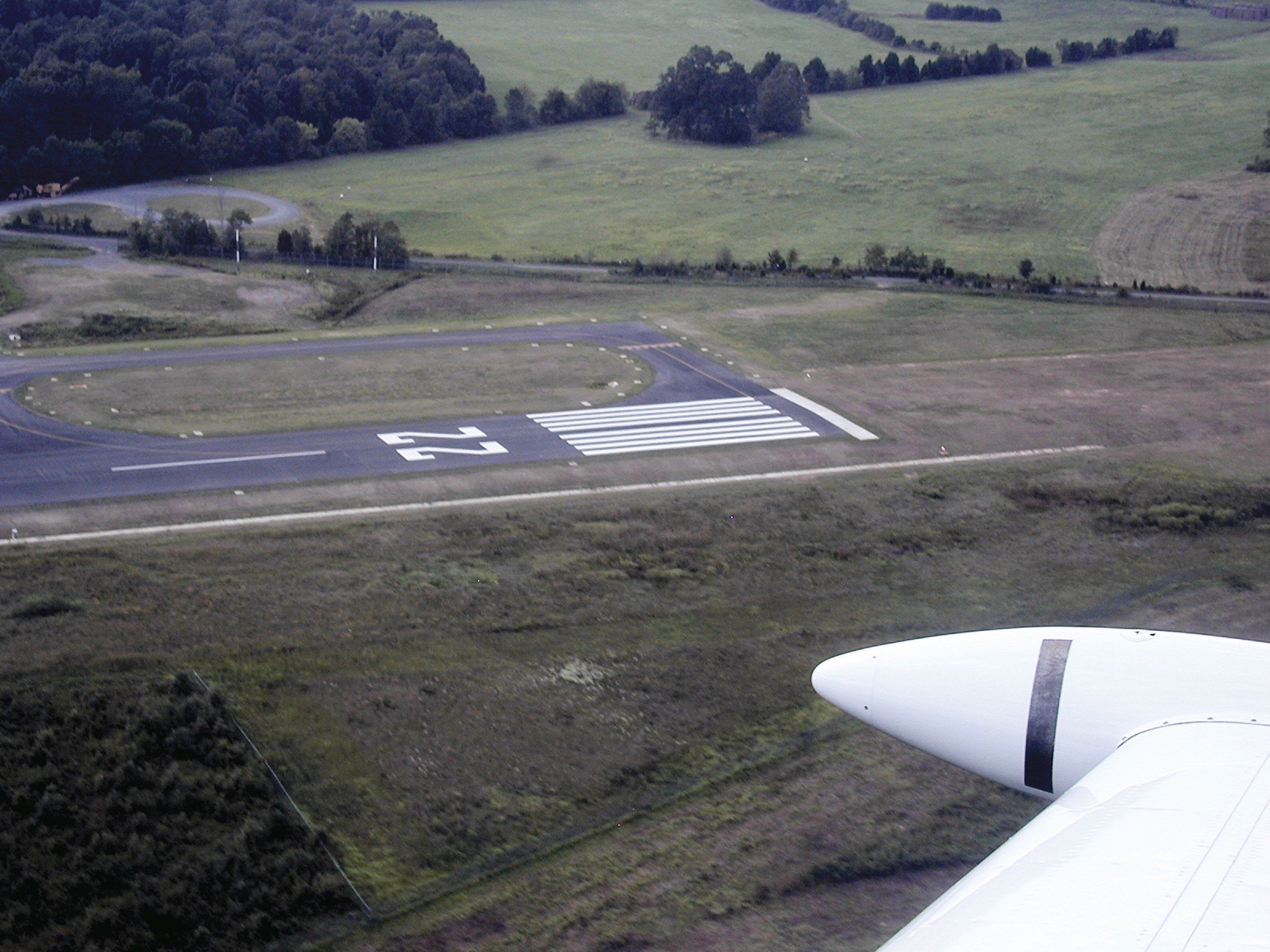 In 2017, the FAA updated its guidance on engine failure shortly after takeoff. The result, The Impossible Turn (FAA-P-8740-44, available as a PDF at tinyurl.com/SAF-Turn), is a comprehensive and well-written document whose very first sentence sums up its recommendations in bold print: “Turning back is the worst possible action when the powerplant fails during climbout in a single.”

The document concedes: “No doubt there are a few, although very few, situations in which circumstances might dictate turning back. But, such decisions, demanding split second action and supreme skill, are beyond the capabilities of the average pilot.”

Even then, however, the FAA concludes: “It’s better by far to establish a well-rehearsed emergency drill and keep in practice, so that should the engine go on strike, there will be no “shall I/shan’t I” nonsense while time runs out.”

For at least the 35 years I’ve been a pilot, landing straight ahead-no exceptions-has been the FAA’s guidance when an engine fails on takeoff. So what changed?

In an appendix, the AC states, “Flight instructors should demonstrate and teach trainees when and how to make a safe 180-degree turn back to the field after an engine failure. Instructors should also train pilots of single-engine airplanes not to make an emergency 180-degree turn back to the field after a failure unless altitude, best glide requirements, and pilot skill allow for a safe return. This emergency procedure training should occur at a safe altitude and should only be taught as a simulated engine-out exercise.”

Additional guidance and several qualifiers that are important factors in presenting this maneuver follow, and are vital to a successful attempt in the event of a real-world departure engine failure. The guidance and caveats are too lengthy to repeat here. Get a copy of the AC at the link provided and see for yourself.

Is all this really a change in the FAA’s philosophy regarding the wisdom of attempting a return to the runway with a failed engine? Or is the intent of the FIRC guidance to convince pilots that the turn is impossible most of the time? Your guess is as good as mine (and the rest of the instructor community’s). Regardless, let’s look at some of the empirical challenges in making what, for many, remains an impossible turn. 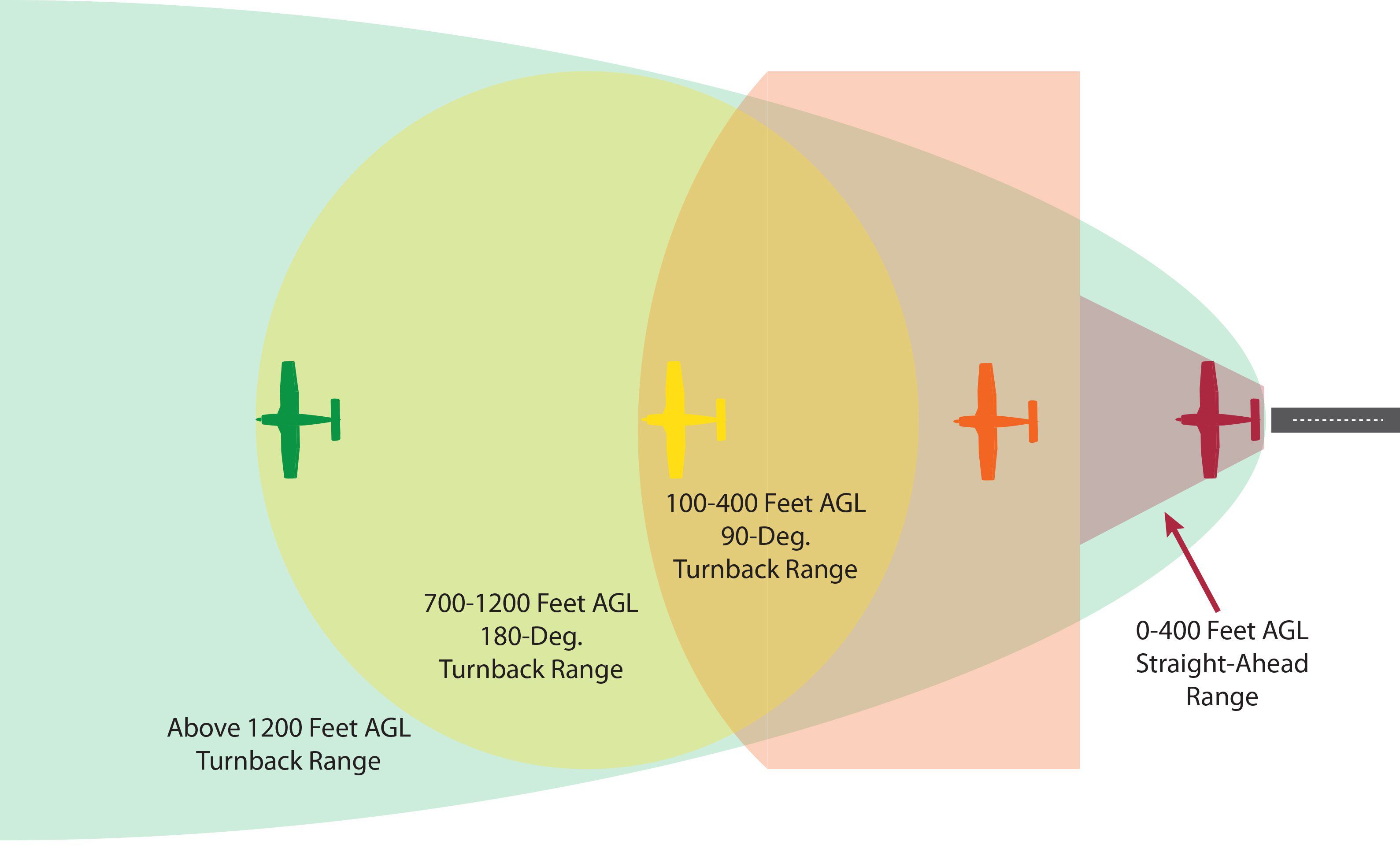 Everything I’ve written so far in this article can be summed up thusly: It’s extremely challenging, and rarely possible, to lose an engine immediately after takeoff, overcome the startle factor and establish maximum-performance control, and then to successfully return to land on the departure runway behind you. Put out of your mind the idea you’ll lose the engine, turn around, line up on the reciprocal runway, put the landing gear back down if applicable, roll onto a smooth touchdown and radio the FBO to come tow you in. It virtually never happens-which is why it’s such a big deal in the rare cases it does.

Many pilots argue that there are no good options straight ahead from some of the airports they use, even their home airports, and that turning back to the runway is the only option. Almost no one considers, however, that “straight ahead or back to the runway” isn’t an all-or-nothing decision. When it comes to surviving engine failure after takeoff, you may have more options.

Think of your initial climb after departure as including a series of decision altitudes. Each altitude describes an expanding range of options that become available to you in the event of engine failure. Announce this “range awareness” to yourself as you climb through each decision altitude. With the image above as a visual explanation, here’s what I mean:

Runway range: The first, and arguably most important, range for dealing with engine failure is before you ever leave the ground. Complete all checklist steps and don’t rationalize away a little roughness or an errant pressure or temperature discrepancy-it probably won’t get better as you take off, and it just might be predicting an impending failure. During takeoff, crosscheck power, temperature and pressure indications against expectations, and measure acceleration against predictions. For example, you should be at 70 percent of the liftoff speed when reaching 50 percent of the computed takeoff distance. If there are discrepancies before or during takeoff, abort and check it out. Most of the time, engines don’t go from 100-percent reliable to partial or total failure without some advance warning. Listen and watch what the engine is telling you, and heed warnings before they become failures.

Straight-ahead range: From the moment the wheels leave the surface until the airplane is at least 400 feet AGL, your only real option in the event of engine failure is to go virtually straight ahead. You probably have less than a minute to prepare to touch down, less if you move lift away from the vertical to make the airplane turn. (My primary instructor advised me to land straight ahead with only minor heading changes “to avoid orphanages and school buses.”) Figure no more than maybe 20 degrees left or right of your heading if the engine quits within 400 feet of the ground. Why 400 feet? Instrument pilots know this is the lowest altitude before making a turn when cleared for a takeoff on course or a heading other than runway heading. It’s an altitude we should be briefing anyway, so dual-purpose it for engine failure range also.

90-degree range: Between 400 AGL and about 700 feet AGL, you may be able to turn as much as 90 degrees left or right to align with the best landing option. To survive this, you need to know ahead of time what that option will be. Look at Google Earth or another depiction of the area off the departure end to make this decision before you board the airplane.

180-degree range: Passing 700 feet AGL and through about 1200 AGL, you are in the range where you may be able to turn up to 180 degrees to align with the best landing option. This still does not put you back on the runway you departed, unless you’re turning steeply into a stiff wind. But it might put you in position to land on an unoccupied taxiway or parallel runway, or at the very least on level airport property, perhaps the infield.

Runway range: Above 1200 feet AGL, you should have enough altitude to actually get back to the runway behind you…if you do everything quickly and correctly. If the runway is short, you may find you get turned around and lined up, but are far enough out you can’t make it back to the runway.

Regardless of the range and the options you attempt, when you glide back through 400 feet AGL, level the wings and land on the best option that’s about straight ahead. Trying to finish a turn at a low altitude is inviting a potentially disastrous cartwheeling arrival when you and your passengers could survive otherwise.

Your objective is survival for your passengers and yourself. You may find it advantageous to land gear-up in a retractable gear airplane, if extending the gear makes the difference whether you’ll reach your landing zone. Airline captain Brian Schiff advises that “a turnback should be attempted only when it is more hazardous not to.” I agree completely-take the best option that your preflight briefing tells you is available.

Straight ahead or back to the runway, however, it’s not an all-or-nothing decision. You have a range of options that vary with your altitude, taking into account the variables of a successful engine-out landing. If you’ve prepared yourself and maintain good range awareness, you have the best chance of surviving an engine failure just after takeoff. 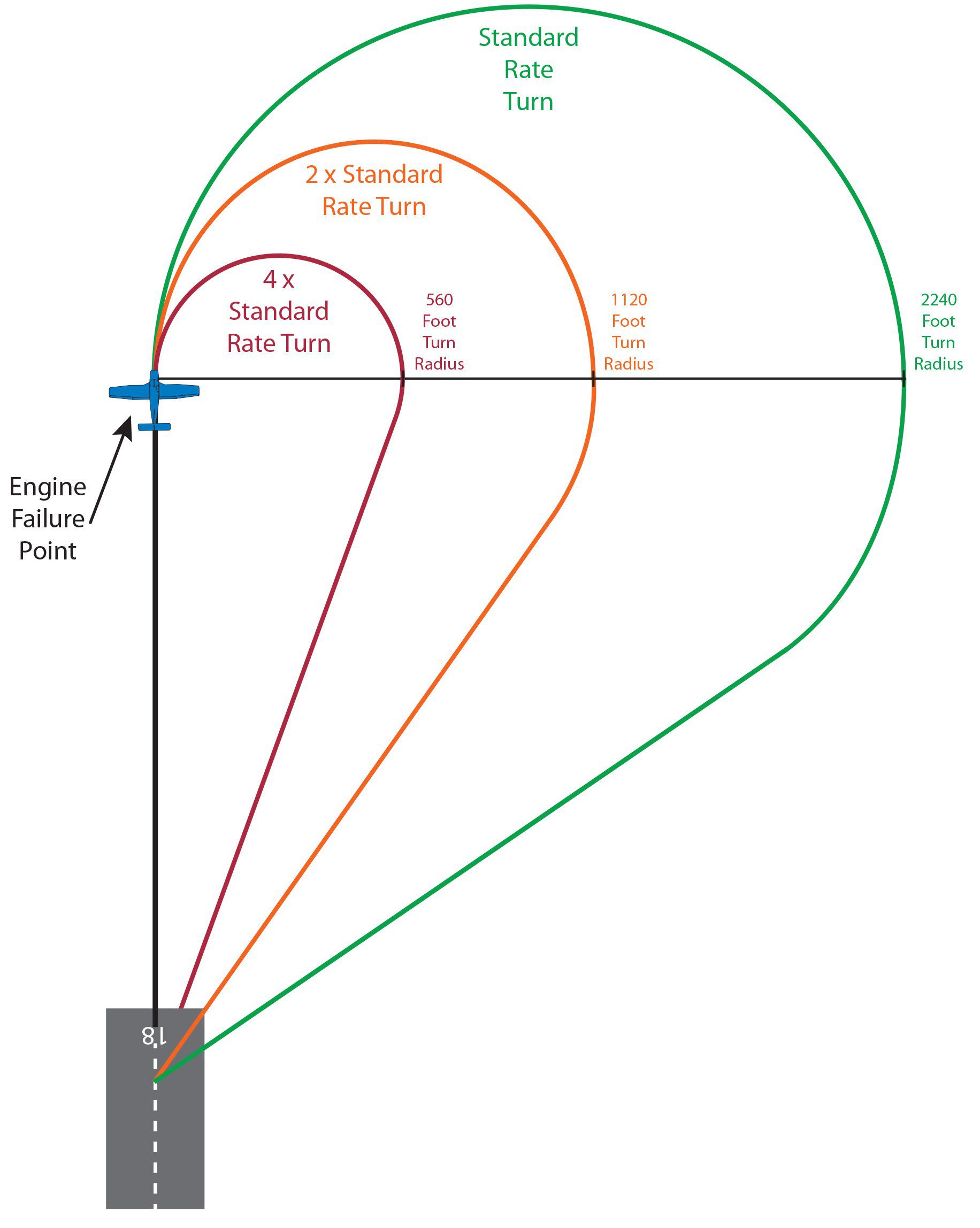 Thanks to the reduced vertical component of lift in a turn, the right column assumes 1.5 times the rate of descent in a twice-standard-rate turn and twice the rate of descent at four times standard rate. Importantly, neither table includes altitude lost during the “startle factor” pause or any straight-line time or altitude lost after pointing back at the airport but before making the last turn to align with the runway. Your mileage may vary.

For several years I’ve been teaching the concept of how altitude determines your options after the engine fails, but I’ve only recently begun using the term “range awareness.” I am borrowing it from my friends and counterparts in the Cirrus community who use “range awareness” to describe when to use the Cirrus Aircraft Protection System (CAPS) airframe parachute for engine failures shortly after takeoff. 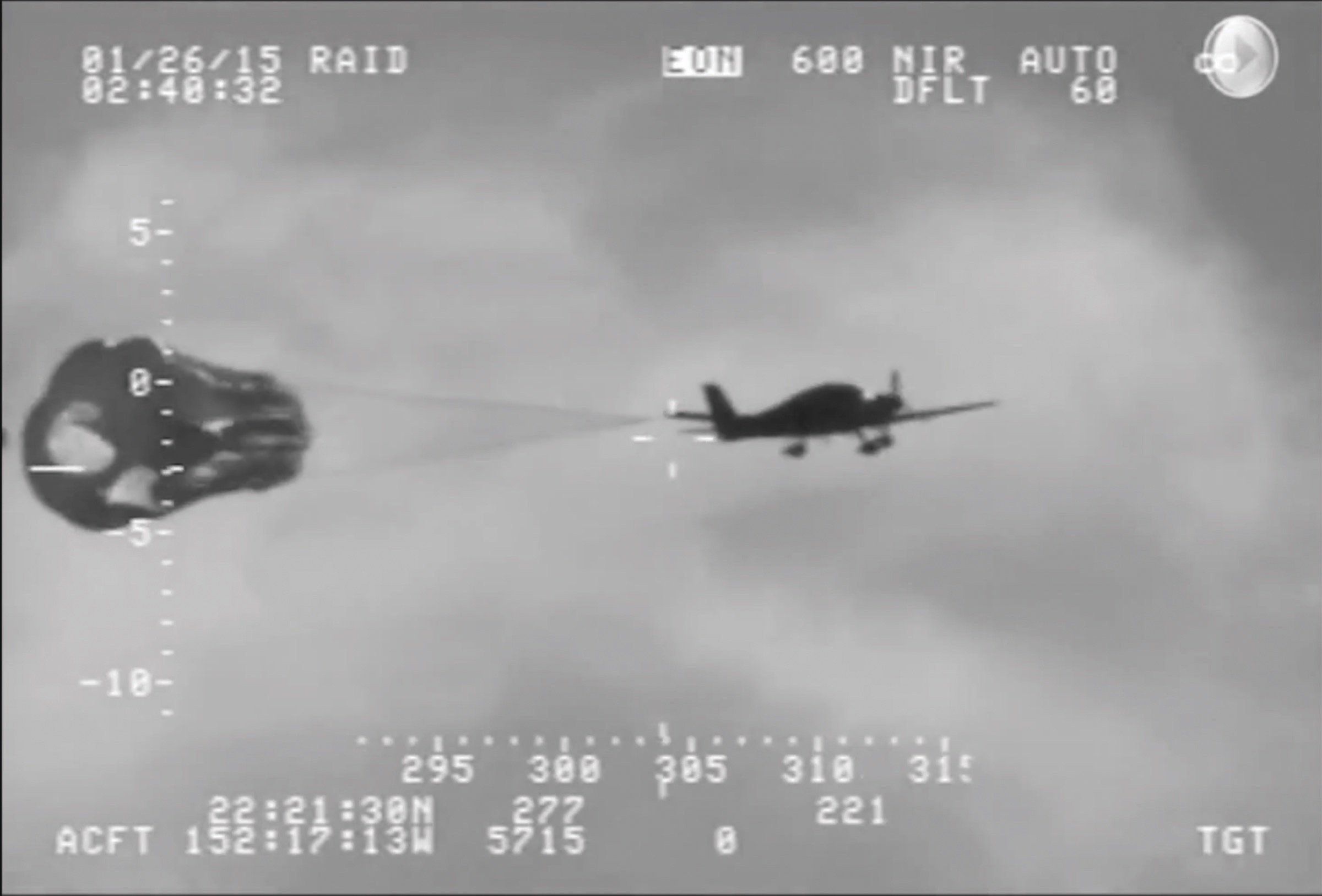 The Cirrus Owners and Pilots Association (COPA) teaches three CAPS ranges for takeoff: from liftoff to 400 AGL is the “No CAPS” zone, because the airplane will descend about 400 feet (500 feet in some models) during parachute deployment and inflation. Below 400 AGL (or 500 AGL, again by model) the Cirrus pilot has the same option as pilots in non-CAPS-equipped airplanes: land straight ahead. COPA teaches that 400-500 feet AGL to 2000 feet AGL is the “CAPS Now” range. Pull the ‘chute at the first sign of engine failure, because the chances of a stall/spin or descent into unfavorable obstacles is historically great and the COPA doesn’t want the pilot to risk it.

Above 2000 feet AGL is COPA’s “Consider CAPS” range-respond to engine failure like the rest of the non-parachute crowd. If the engine won’t restart, and when descending through 1000 feet AGL there is no good landing option within comfortable gliding range, then deploy the CAPS.