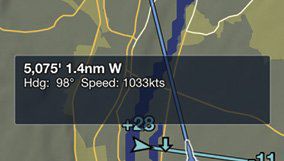 Thank you for printing in August’s magazine the short letter I wrote, highlighting an issue I encountered just south of the Albany, N.Y., Class C airspace—a Cub showing an ADS-B altitude of 500 feet below sea level. (By the way, I passed the same Cub today at very close range. This time he wasn’t showing up at all on ADS-B). In your response, you asked readers to report other anomalies, so here’s one from a week or so ago.

I was in nearly the exact same location as I was for the prior report when my ADS-B In/Out transceiver, a Garmin GTX 345, highlighted an aircraft passing low overhead at a speed of 1033 knots. I eagerly acquired it visually, assuming it was a UFO. (There has been a spike in UFO sightings recently—I was hoping to report the first one with ADS-B compliance!)

Sadly, the “streaker” was a generic bizjet, likely bound for nearby KPSF. Interestingly, for as long as I received data from this aircraft, its ADS-B-reported groundspeed remained above 1000 knots.

Is it interesting, or just a coincidence, that my location was almost precisely the same as where I had the issue of the “Cub Yellow Submarine” a few weeks prior? I don’t know enough about the intricacies of the ADS B system, but could the problem not lie with the aircraft reporting altitude and speed but with the interpretation of its data by the nearby ground station?

Thanks for also sharing the screenshot of your iPad-based electronic flight bag displaying the ADS-B target’s groundspeed, which is reproduced below. We just work here, but we’d guess the problem resides with the ground station near you. That said, and as we wrote in August, we’re very interested in hearing from other readers who have experienced what we call ADS-B shenanigans—erroneous traffic data, or targets disappearing and reappearing, for example—when it comes to the TIS-B traffic information service available via ADS-B In. “Screenshots or it didn’t happen,” as the kids say.

There’s An App For That

Regarding Mike Hart’s “Downhill Or Downwind” article in the August 2019 issue, I’ve wondered the same thing myself. In researching this, I came across material on the EAA Chapter 1000 web site based on a 1966 technical report from the U.S. Air Force Flight Test Center at Edwards AFB. The sidebar on the effect of slope for takeoff in the article gets it mostly right. The key difference is that the result is a function of rotation speed (VR ).