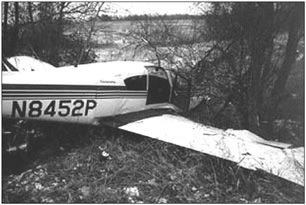 Its kind of a cute acronym when you pronounce it: see-fit. But the reality of controlled flight into terrain is anything but cute. One moment, an aircraft and its occupants are droning along in relative calm, perhaps preparing for a landing or just departing on what promises to be an enjoyable flight. The next moment, the airplane and its contents are strewn across a remote mountainside. It doesnt have to be that way, and new technology-TAWS-coming to a cockpit near you is designed to minimize the CFIT threat.

According to the FAA, a CFIT accident occurs when an airworthy aircraft under the control of a pilot is inadvertently flown into terrain, water or an obstacle with inadequate awareness on the part of the pilot of the impending disaster. A typical description of such an accident goes something like this narrative, also from the FAA: The pilot continued flight in adverse weather conditions and probably did not have the necessary visual references to avoid hitting the steep slope of the mountain. Likely contributing to this accident was the pilots over-reliance on GPS while attempting to maintain visual meteorological conditions (VMC).

Another way to look at the CFIT record is that 17% of all GA fatalities result from someone flying a perfectly good airplane into some immovable object and that they are fatal 58% of the time.

Technology To The Rescue
Studies conducted in the early 1970s indicated that CFIT accidents could be avoided if some type of warning system had been used. From these studies came the 1974 requirement that all FAR Part 121 operators and some Part 135 airplanes have and use a ground proximity warning system (GPWS). This GPWS requirement was extended to Part 135 certificate holders operating turbine-powered airplanes with 10 or more passenger seats.

Subsequently, advances in databases, processors and software made possible something called Terrain Awareness and Warning System or TAWS, which advances GPWS technology with earlier aural and visual warnings of impending terrain, the ability to look forward into the airplanes intended flight path and more crew-friendly behavior in the approach and landing phases of flight.

In March 2000, the FAA published a new terrain-avoidance regulation for operators under Parts 135 and 91. The rules require all turbine-powered U.S.-registered airplanes type certificated for six to nine passenger seats to be equipped with an FAA-approved Class B TAWS device by March 29, 2005. All Part 121 operators and Part 135 operators of airplanes certificated to seat 10 or more passengers must have a Class A TAWS device by the same date. The principal differences between Class A and Class B TAWS is that Class B does not require a visual presentation of terrain avoidance information-only an aural warning-while Class A TAWS requires both. As a practical matter, many products certified as Class B devices will also incorporate some type of visual presentation, most likely built around a moving map or integrated with an existing GPS-based moving map display.

A third TAWS class, Class C, is defined by the FAA for voluntary use aboard smaller aircraft and where TAWS Class A or B equipment is not required. And its likely that more handhelds like Garmins 296 will hit the market.

The FLTA function looks ahead of the airplane along and below the airplanes lateral and vertical flight path and provides suitable alerts if a potential CFIT threat exists.

The PDA function of the TAWS uses the airplanes current position and flight path information as determined from a suitable navigation source-like GPS-and airport database to determine if the airplane is hazardously below the normal (typically three degrees) approach path for the nearest runway as defined by the alerting algorithm.

Additionally, Class A TAWS equipment must provide indications of imminent contact with the ground for conditions such as excessive rates of descent, excessive closure rate to terrain, negative climb rate or altitude loss after takeoff, flight into terrain when not in the landing configuration, excessive downward deviation from an ILS glideslope and aurally annunciate five hundred when the airplane descends to 500 feet above the terrain or nearest runway elevation.

As noted earlier, Class B TAWS equipment does not require a display to annunciate warnings. Additionally, Class B equipment must provide indications of imminent contact with the ground only for excessive rates of descent and negative climb rates or altitude loss after takeoff. Class B equipment must also include the five hundred voice callout when the airplane descends to 500 feet above the nearest runway elevation.

Synthetic Vision
While TAWS promises to minimize or eliminate CFIT accidents involving aircraft so equipped, another technology can help. Synthetic vision-Gulfstreams Enhanced Vision System, or EVS-uses infrared technology similar to night vision goggles to see through darkess and low-visibility conditions and display the results in the cockpit. Using the EVS, originally developed by Kollsman, Inc., of Kollsman window fame as its All Weather Window, allows crews flying in low visibility to identify runway environments well before an unaided eye can pick out details. It also displays terrain features and, as a result, enhances a pilots situational awareness.

The Kollsman/Gulfstream EVS implementation consists of a forward-looking infrared camera, a lens system, processor box, display and associated connections. One of the systems immediate benefits is to enhance both the safety ad utility of standard, category I instrument landing system (ILS) procedures by effectively allowing crews using the system to land when they would other be forced to executie a missed approach. Since the benefits of synthetic vision extend well beyond merely preventing CFIT, its a good bet that such systems will become incrementally less expensive, smaller and more ubiquitious with time.

Presently, EVS is only available on high-end turbine equipment-its an option on Gulfstreams, for example-and is priced well beyond the total value of the average piston aircraft. For now, anyway.

Conclusion
The current flood of TAWS, TAWS-like products and infrared-based technologies like EVS to the GA market will certainly help crews avoid CFIT, but its still up to pilots to prevent this type of accident. With a little planning, adherence to good operating practices and some help from the new portable and panel-mounted technologies available for your aircraft, you can.