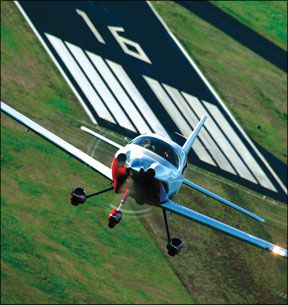 My first “actual” instrument flight after earning the rating was a 27-nm hop from Sedalia to Boonville, Mo., in a Cessna 172. The entire flight was flown below radar coverage. Navigation was by ADF-an outbound bearing from Sedalia to intercept an inbound to Boonvilles Jessie Vertiel Memorial Airport. With my clearance received I climbed into juicy clouds at about 800 feet agl and cruised to the “far” NDB, thence flying the full-procedure approach. I had a strong crosswind on the inbound course; it was too low for VOR cross-bearings, so my navigation was by the lone, waggling ADF needle, my watch and a rough guess at my probable groundspeed. I juggled the approach plate, my charts and kneeboard, and the flight controls as I fought light turbulence while hoping to hold my wind-corrected

bearing to avoid towers growing up into the murk. I broke out about two miles from the runway, lucky to pick out and avoid a Cessna scud-running just beneath the cloud deck, then scooted the rest of the way in at MDA until intercepting the VASI and landing in a stiff wind.

Contrast that 1988 flight with the same if done today. A quick flight-plan entry in the GPS instantly plots a magenta line on a moving-map display. Airborne, I engage the autopilot in navigation mode (tightened to approach tolerance if I like), activate the approach in the flight management system and call up an overlay of the procedure on my multifunction display (MFD). The GPS gives me a wind vector, and instantaneous groundspeed and track information, for dealing with the wind that varies with altitude. Towers in the murk are clearly depicted on the moving map and using the autopilot lets me better monitor whats going on. The scud-running traffic even appears on my traffic alert system before I break out of the clouds. I dont have to juggle the airplane and my charts, although by personal preference I click off the autopilot and hand-fly the last part of the approach to make sure the airplanes in trim, and to get a better feel before Im too close to the runway.

I might still be flying a Cessna 172, and these technologies cant do anything about radar coverage or the crosswind landing. But theres absolutely no question that making this flight as equipped today is potentially far safer than my first solo IFR encounter. Are technologically advanced airplanes (TAAs) living up to their potential in actual use? Is flying markedly safer because of these advances?

Slap a wing leveler and a monochrome KLN89B GPS with a rudimentary stick-figure moving map into an Ercoupe and youve got a TAA. When we talk about TAAs, however, most of us are thinking about new “glass cockpit” designs, and older airplanes that have been upgraded with autopilots and moving-map GPS to meet TAA standards. For purposes of this article (and to make gathering NTSB evidence far easier) well look primarily at full glass-cockpit airplanes like Cirrus, Cessna Columbia and late-model legacy products when considering what effect TAAs have on flying safety.

Aviation Safety), I compared the Cirrus SR20/22 record to Beech Bonanzas and Barons, what I called “similar-mission aircraft” (SMA). I wrote:

Those percentage conclusions remain valid. But Cirrus production has now nearly matched the entire Model 36 line in numbers; there are currently 2610 SR22s on the U.S. registry, and 2818 of the varied Model 36 Bonanzas. Realizing this parity of numbers has not existed for the entire time, lets nonetheless look at the frequency of NTSB reports (not just the rates, as in my 2007 article), and focus just on these two competing models. The results are summarized in the table at the top of this page.

With an almost equal number of airplanes in the fleet, the TAA (represented by Cirrus SR22) has a substantially lower accident frequency than the similar-performing but not “pure” TAA Bonanza 36 series (with the exception of the glass-cockpit G36; more in a moment).

Both types have an equal frequency of ice-related accidents, perhaps reflecting airframe ice formation as the last great “unknown” in aviation weather forecasting. The non-TAA engine failure frequency is probably a matter of older engines with the increased chances of corrosion and maintenance/overhaul-related mechanic error that may eventually catch up with the newer TAA fleet as well. The better record of TAAs in thunderstorms and CFIT scenarios points to the advantage of weather uplinks and terrain hazard information common to TAAs. Too, the complete lack of fuel-related engine failures in TAAs suggests GPS-interfaced fuel/range/endurance information is a valuable safety-enhancing technology. In fact, according to AOPA, “glass-cockpit TAA have had no fatal accidents related to fuel management.”

Perhaps dispelling the myth that many TAA pilots dont have the stick-and-rudder skills of traditional airplane flyers, loss of directional control (LODC) on takeoff or landing happens very infrequently, and at about the same rate in either class of airplane. Meanwhile, the non-TAA pilot was three times as likely to crash from a stall. Further, takeoff accidents, a fairly common and dangerous hazard in general aviation, have yet to appear in the tally of our representative TAA.

What about the glass cockpit G36 Bonanza? Does the seemingly improved TAA record hold true, i.e., does the move to glass make a safer airplane? Three years into G36 production and with 203 airplanes on the FAA registry, theres been only one NTSB-reported G36 mishap. The NTSBs report includes with the statement: “The pilot and the two passengers left the bar together….” The results were predictable. Effectively, then, the “glass” Bonanza fleet remains accident-free-further evidence, perhaps, of the safety benefits of TAA cockpits.

Nothings perfect, of course, and a TAA panel is no exception. Although theyre not reported in the NTSB record, the insurance industry reports an increase in taxi accidents involving TAA airplanes. The likely cause? Heads-down taxiing while trying to program avionics. Another issue is growing complacency with highly capable autopilots driven by very accurate GPS. For instance, about two years ago, I met with a business executive after he had delivered a very good presentation. Hed flown himself to Wichita in a TAA for the meeting and commented off-handedly that hed set up the autopilot and spent his trip head-down working on his presentation, instead of actively monitoring and participating in his flight. Had something gone wrong, the businessman-pilot might not have noticed right away, or been in the loop enough to recover should a system be programmed incorrectly or malfunction in flight.

The NASA Aviation Safety Reporting System (ASRS) is beginning to note an increase in reports involving TAAs. In a recent issue of

Callback (#338) devoted exclusively to TAA near-accident narratives, NASA concludes, “As use of these technology marvels grows, ASRS is also seeing more reporting of GA advanced cockpit systems incidents. It is clear that new technologies are placing higher demands on single-pilot resource management-the need to fly the airplane and effectively use advanced cockpit systems at the same time.”

The ASRS publication continues: “These issues include complacency, lack of advanced systems knowledge, over-reliance on automated systems and distraction associated with programming tasks.”

In short, a TAAs advanced capability may come with the need for far greater familiarity with the minutia of avionics operation than has been traditional in general aviation aircraft. Sophisticated autopilots permit stepping back to monitor the flight, but the pilot cannot abdicate responsibility and fail to actively perform that function.

Where earlier-generation navigation radios from various manufacturers were simple and operated about the same way, modern avionics require significant study and frequency of use in order to remain proficient. Sister publication

Aviation Consumer compared the Avidyne and Garmin MFD/PFD combinations and concluded that, regardless of the system used, a pilot needs to make frequent (at least once a week) flights in the IFR system using the avionics full capabilities to remain safely proficient in their use.

So whats changed that these very capable yet very demanding airplanes appear to be enjoying a clear safety advantage? Certainly, the increased situational

awareness brought on by a well-used TAA panel and the high-quality autopilots common to these aircraft play a part in accident reduction. But in my opinion its really the insurance-driven training requirement, focused on systems familiarity and decision-making, which is leading us to the biggest safety improvement.

No matter what your experience, almost all insurance underwriters require initial and recurrent training in TAAs given by an instructor well-versed in the type of airplane. As individual models of TAA become more prevalent in the fleet, more instructors will become expert in their intricacies, and we may not need to depend so heavily on factory-certified CFIs for initial and recurrent training-increasing the availability of safety training. Further, if the same caliber of type-specific training was encouraged in other makes and models of airplanes as those airplanes are upgraded with TAA equipment, we might have a corresponding reduction in accidents in those types as well.

The FAA considers the advances of TAA to be “available safety”-i.e., the potential for accident avoidance if the pilot chooses properly (see the sidebar, “The FAA and TAA Safety,” page 19). The introduction of TAAs has prompted a maturation of light plane training requirements for the reality of single-pilot instrument flight, along with a heightened level of situational awareness and automated assistance for the well-trained pilot. Initial bad experience with TAAs, especially among lower-time pilots flying into adverse weather conditions, reinforces the need for systems expertise and cockpit management in addition to traditional stick-and-rudder flying.

Highly capable avionics, weather uplinks and autopilots promise a much safer environment than I had in my first, short IFR flight. Combined with initial and regular recurrent type-specific training, and supported by frequent flight “in the system” using the TAAs full capabilities, the record seems to be telling us when pilots choose to operate within their limitations, TAAs can indeed be safer than non-technologically advanced airplanes.