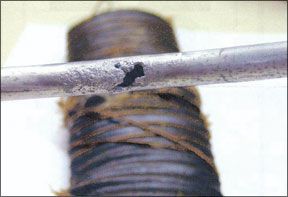 While in process of checking the individual oxygen masks during an annual inspection and five-year O2 bottle re-certification, a technician heard a very faint sound of a gas leak in the overhead interior paneling of the aircraft. After pulling the headliner for a closer inspection and plumbing in low-pressure nitrogen for troubleshooting, the technician narrowed down the “hiss” to a line just forward of the cabin door (p/n 5100107-46).

To access this line, which passes through a structural beam in the overhead, it

was necessary to drill out approximately 40 rivets securing a thin honeycomb panel to the overhead (structure). Above the panel is the ducting supplying the cabin Wemac vents. The line as pictured has been cleaned up and the corrosion removed for clarity.

The corrosion occurred where the ducting passed under it. The ducting was removed to facilitate line removal, and was found to be totally deteriorated.

A technician cautions operator not to miss the possibility of a cracked flap handle support mount bracket (p/n 62679-000) on these aircraft. The bracket is riveted in the center tunnel and accepts two bolts at the forward side of the flap handle support mount. This is a difficult area to see, even with a mirror. We have found six cracked brackets to date and suspect fatigue and air loads are causing the cracks.

A new oil cooler was installed on a Robinson R-22A helicopter. During a subsequent flight, the oil temperature rose and the oil pressure dropped, precipitating an unscheduled landing. After landing, the tail boom was covered with engine oil. Only after pressure testing was a -inch crack in the cooler core found.

A repair station technician installed all new through-bolts in this engine (Superior Air Parts: SA641931-10.75; lot number K070059179 rev. E). Within a few hours after torquing, the through-bolt snapped at the oil ring groove. This is the third through-bolt that has snapped after sitting for a while after the final torque application.