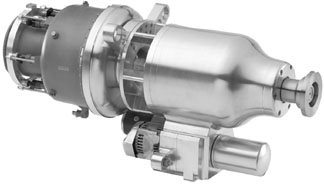 Its axiomatic that the gas turbine engine is more reliable than general aviations ubiquitous warhorse, the reciprocating piston engine. Like the old saw about the two kinds of pilots-those whove made a wheels-up landing and those who will-we all fly behind our piston engines wondering not if theyll eat a valve, but when.

Several new companies have appeared recently with promises for GA turbines as plentiful as Chinese goods at a WalMart-and almost as affordable. For those of us interested in safety, what kinds of effects can we expect should the powerplant demographics of the fleet, particularly the demographics of spamcan power, change from suck-squeeze-bang-blow to the smooth whine of the turbine?

The Differences
First, a quick refresher on the two different technologies is in order. Understand that both the piston engine and the gas turbine engine are heat engines. That is, they both take a fuel and convert that fuels latent energy into heat, and then use that heat to do work. Specifically, both types of engines take in a petroleum-based fuel and use that fuels energy to heat a gas.

As we recall from high school physics, when gas is heated, it expands. This property is what makes everything from the whistle on a teapot to the space shuttles rocket motors work, not to mention our Lycoming, Continental, Williams and General Electric engines. All piston or turbine engines utilize the power of an expanding gas to do their thing. Its in how they use the expanding gas to do work that the differences between pistons and gas turbines emerge.

In a piston engine, the expanding gas is trapped inside the cylinder, where its used to drive a piston linearly. The linear movement of the piston is translated to rotational movement by the crankshaft assembly in a mechanism obvious to anyone familiar with a bicycle.

All of this, conceptually, requires a complex mechanism. There are valves that open to let in the fuel and air, there are valves that open to exhaust the waste gasses, theres a spark or a fuel injection that have to happen at just the right time for the prevailing circumstances and theres the complexity of converting the linear motion of the piston into rotation. None of it looks pretty and all of it takes place in a hot, harsh, and corrosive environment. Its a wonder it works at all.

A gas turbine, on the other hand, is conceptually very simple. We saw above the four basic cycles of the piston engine-intake, combustion, expansion, exhaust (see the sidebar on page 10 for additional details). The gas turbine also has those four basic cycles. But where in the piston engine each cycle occurs in the same location (the cylinder), in the gas turbine each cycle takes place in a specific, and different, location in the engine.

Air is inducted by a set of rotating blades, called the compressor. It looks like a bunch of ordinary house fans, all stacked one behind the other so that what one fan blows out, another fan sucks up. Once the air is sufficiently compressed, its admitted to a sheet-metal box called the combustion chamber, where it is mixed with fuel and ignited.

The burning gas expands rapidly and is passed over another set of rotating blades, the turbine. The turbine operates just like the compressor in reverse. Instead of using work to compress the gas, the gas works against the turbines blades to create work. The turbine and the compressor are linked by a shaft so that the work created by the hot gas passing over the turbine is used by the compressor to pull the air in for combustion in the first place.

Not all of the work produced by the turbine is used by the engines compressor, though. Theres still a lot of energy left in the gas once it leaves the turbine and this energy either exits the engine as a wailing blast of hot air, as done on turbojets, or its used to drive another big fan that looks like an enormous multi-bladed propeller-largely because thats exactly what it is. This is the turbofan engine. In either case, the result is the same: a large amount of exhaust or air directed towards the rear of the engine.

Heres another lesson we all learned in high school physics: For every action, theres an equal and opposite reaction. The air or exhaust pushed backwards produces a kinetic force forward. So she flies!

In short, a gas turbine is nothing more than some fans separated by a fire and a shaft. What could be simpler?

Looks Are Deceiving
If the gas turbine were really as simple as Ive made out, then why are pistons still around at all? The answer is that theyre not actually that simple. Although the process in a gas turbine is quite a bit simpler than the process in a piston, execution is another thing entirely. And its the inability to execute thats kept the simple turbine wolf locked outside the piston sheeps door.

The gas turbine falls short of the piston in three key areas. The first is construction cost. Although it looks simple in concept, making a gas turbine that will actually work is quite hard. The turbine, in particular, has to run as hot as possible in order to keep fuel economy reasonable. Allowing it to run hot means using very sophisticated materials made using very precise and time-consuming processes.

The second is operating cost. Gas turbines are inherently more fuel-hungry than their reciprocating cousins. The Pratt & Whitney PT-6 turboprop engine consumes nearly twice as much fuel to produce a given amount of horsepower as would a comparable Lycoming or Continental reciprocating powerplant. And the picture for pure gas turbine, i.e., jets, without an associated propeller, is even worse.

A Game Of Whack-A-Mole
In 2000, engine mechanical failure caused less than seven percent of all general aviation accidents and less than three percent of all fatal GA accidents. The piston engine comprises roughly 68% of all the engines in the field, but even if we were to replace each and every one of them with more reliable gas turbines, wed achieve little in the way of improving the overall GA accident rate. In fact, we might end up actually increasing it.Heres why.

Call it accident homeostasis but it often occurs that fixing one problem leads to a whole set of new problems. For example, loss of aircraft control and/or encounters with weather are the first causes of about 18 percent of GA accidents. Both of those factors are correlated with aircraft performance.In short, higher-performance aircraft are more likely to encounter weather and they have an inherently higher chance of a loss of control. The extent to which adoption of gas turbines, particularly jets, shifts the demographics of the GA fleet towards higher performance aircraft is also the degree to which its likely to increase those types of accidents. All while doing little in the way of reducing accidents from engine failure.

There are other issues as well. Fuel exhaustion is a leading cause of GA accidents-a far higher contributor than mechanical engine failure. To the degree that fuel management is more complicated in a turbine engine (altitude, speed and temperature affect fuel consumption far more in a turbine than in a piston) and that getting the maximum fuel economy means flying as high as possible is also the degree to which the human factor may actually cause a decrease in overall accident safety with the turbine vs. the piston engine.

Finally, whats the maintenance picture going to look like? We piston pilots pale at the cost of replacing a $200 exhaust valve. What kinds of deferred maintenance, or substitute parts of questionable origin, are we going to talk ourselves into when faced with a $10,000+ bill for fixing our turbine? Gas turbines in commercial aviation applications have a wonderful record of reliability, but thats come about because of a huge emphasis on monitoring and maintenance-all at tremendous cost. Sure a CFM56 jet engine might have an 18,000-hour TBO. But it also costs $2 million to overhaul. Now the CFM56 is a real big engine, but its cost of $100-plus an hour in amortized overhaul costs arent out of line with what youre likely to see in the smaller gas turbine engines appropriate for most of GA.

Each of us has an innate amount of risk that were prepared to accept and we will adjust our lives to preserve that amount of risk, no more and no less, as the situation changes. Tell me my new single-engine turbine is 10 times as reliable as the piston it replaced? Suddenly launching in IMC over the Alleghenies, at night is an acceptable risk to me. If Ive maintained risk homeostasis Im lucky. In all probability, however, Ive actually significantly increased my chances of having an accident.

Is Turbine Safety A Myth?
All through this article Ive operated under the assumption that the gas turbine is indeed more reliable, as an engine, than the equivalent piston.Ive argued that other factors associated with the gas turbine-including weather, maintenance and aircraft performance, as examples-are likely to make the entire package of an airframe powered by a turbine engine more accident-prone than a similar package using a piston engine.

But its not even clear that the core premise, that of increased engine reliability of the gas turbine, is valid. Our piston engines may look like a byzantine collection of parts that would embarrass Rube Goldberg. But theyve also benefitted from some 100 years of gradual evolution. Of course, both Lycoming and Continental virtually stopped their respective engine research in the 1960s. Since then, their concentration has been mostly on development, focusing primarily on those things which make the engines fail in the first place.

Because the airframes and applications of turbine vs. piston helicopters tend to be very different, thats partially an apples-and-oranges comparison.But it points out just how difficult it is to really compare the reliability of the two different types of powerplant. Theres simply no real all else being equal baseline on which to make a comparison.

Which leads me to the conclusion of this article. Namely that for all of the reasons to advocate for gas-turbine power, overall safety is the shakiest of premises.

Also With This Article
“What About Diesels?”
“How They Work”
“Costs Vs. Benefits”

-Gregory Travis, a PP-ASEL-IA with 2200 hours, has written about engines and engine technology for 10 years. He owns a piston-powered Cessna 172.