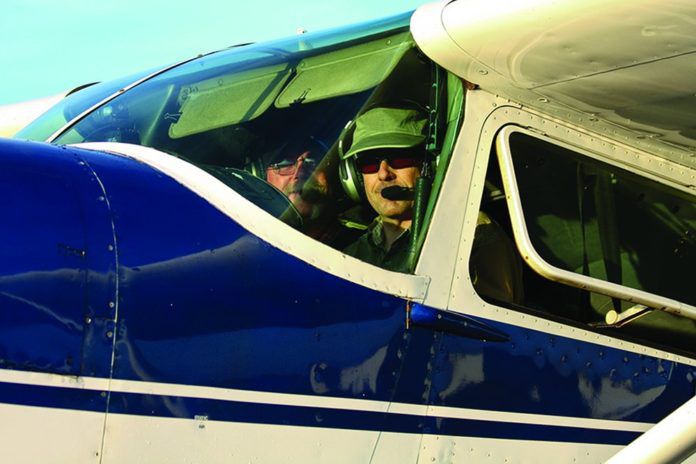 The day’s mission was to coach a friend of mine through his three bangs-and-goes using another friend’s Cessna 172. Although he had little time, if any, in Cessnas, he was in the left seat. I was serving as PIC from the right. Shortly after we secured the cabin and ran the before-start checklist, the mighty 160-hp Lycoming was happily purring away. We were getting ready to call for a taxi clearance when the engine stopped. No cough, no protest, no warning.

“What did you do?” I asked. “Nothing,” the bang-and-go candidate responded. So we ran the checklist again. When we came to the floor-mounted fuel selector, I asked, “How did the fuel selector get turned off?” He said, “It’s not; I turned it to ‘both’ before starting the engine and haven’t touched it since.” Houston, we found the problem.

That specific event highlights a lack of familiarity with an admittedly ambiguous selector design. It also is an example of one pilot repositioning a control without either pilot verifying that it was the correct control and was moved to the desired position. That’s something that can happen only when two or more pilots are trying to fly the same airplane at the same time. In such situations, the end result often is no one is flying the airplane. And that’s bad.

To me, it’s one of general aviation riskiest common practices, and one of them with relatively easily remedies. Yes; solo pilots can and do make the same mistakes. That’s why we have checklists, placards and procedures. It’s why we train and it’s why we practice. It’s also why we need to think through the cockpit responsibilities when two pilots are flying a single-pilot aircraft.

The record of accidents resulting from miscommunication or poor resource management in the cockpit is long. To combat it, formal cockpit resource management (CRM) training was created to ensure the hands-on control of an aircraft was never in doubt. The benefits of CRM long have been understood and there are many examples of how they’ve been part of the solution in both corporate and airline operations. Generally, the pilot(s) not flying monitored the flying pilot to ensure the aircraft’s configuration and trajectory were correct at all times. When deciding questions beyond the flight plan, and even when changing the agreed-upon configuration and trajectory, confirmation is required. Proper resource management dictates all available talent and experience is consulted and considered. Then, the pilot in command decides a course of action and who will implement it.

There’s nothing so formal in the typical general aviation cockpit. Going out on a very stout limb, I’d venture to say most GA flights are solo or involve non-rated passengers, which makes teaching and practicing CRM a waste of time: The solo pilot often is the only available resource capable of making decisions and implementing them, manipulating the flight controls or even understanding the configuration and trajectory have changed.

The one area in which anything approaching CRM is evident in GA cockpit usually is the FAA’s formal program calling for positive exchange of flight controls. The three-step process is described in the sidebar above. It concentrates on communication between a student and instructor to ensure they both know who’s doing what. Ideally, two or more rated pilots would implement the same procedures, and many do. But the most common division of labor in a GA cockpit likely is something along the lines of the left-seater handling the flight controls while the right-seater talks to ATC, navigates the agreed flight plan and looks for traffic

Even so, it usually goes some like the right-seater asking if he or she can help share the duties. Without much thought, the left-seater will suggest handling the radios or holding the chart. As the flight progresses, the right-seater might get some stick time if there’s no autopilot, or maybe play with the EFB. Curiously enough, delegating those tasks is what happens in the corporate and airline world, too, though professional crews tend toward more formality. One of the key differences is communication.

In fact, one of the keys to minimizing the risk imposed when two pilots are in a GA aircraft is communication. Referring back to our fuel selector example at the beginning, what would have happened if the left seater announced to me he was repositioning the fuel selector? Two main things.

First, a faint bell would have gone off in my head asking why the fuel selector hadn’t been left in the both position, as was the custom among those who flew that plane. Second, I likely would have verified what he was doing, if only because properly positioning the fuel sector is sort of a big deal. I don’t recall if I realized at the time the selector design was somewhat ambiguous, something I certainly know now. Its design makes it easy for someone accustomed to Piper Cherokees to make the wrong choice.

Which highlights another feature of multi-pilot GA cockpits: There’s always someone who know the aircraft’s systems best. He or she knows to which tank a fuel-injection system returns its excess, or how to set the parking brake. That person ideally is in the left seat, but he or she must be involved in the process when systems are manipulated.

The bottom line in any two-person cockpit, whether a Beechcraft or a Boeing, is communication. Basically no changes to the airplane’s systems should be made without discussion, agreement and verification. What we’re not looking for is a surprise. We achieve that goal through communication—verbalizing what we’re doing—so each action one pilot takes is predictable and understood by the other. We don’t want the engine dying in the tiedown, for example, and surely don’t want it to quit shortly after takeoff.

The final thing about two pilots in the same GA cockpit is one of them has to be the pilot in command, the one on whose decisions the flight’s outcome may depend. Usually that’s the aircraft’s owner or renter, and pretty much any decision beyond the passenger-side sun visor’s position needs to be something the PIC understands and approves. If the right-seater doesn’t like that, then he or she can rent their own airplane next time. Someone has to be the ultimate person in charge, because two pilots can’t fly the same airplane at the same time.