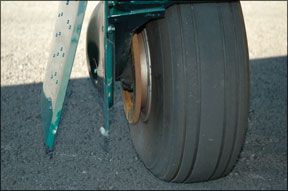 Transforming our elegant aerial machines into land vehicles is arguably the single most difficult aspect of flying. Many flight hours are spent practicing approaches and landings, occasionally followed by smooth deceleration to a safe, controlled stop. Brakes help make this possible, but if you ignore or abuse them they can bite back in a most spiteful way.

The brakes in most general aviation airplanes involve relatively simple systems, but theyre not as robust as an automobiles. For one thing, most personal airplanes

arent equipped with an anti-lock brake system. For another, automobile brake components are larger, heavier and more powerful. Yet, we often find ourselves in an airplane on or near the ground traveling at highway speeds. And, like so many tasks associated with aviation, theres also a right and wrong way to use an airplanes brakes. Lets start with how to inspect them.

To conduct a thorough pre-flight inspection of your brakes, you have to be able to see them, but this is not always possible or practical. Wheel fairings, the streamlined landing gear covers also known as wheel pants, have strutted down airport runways since the days when pillbox hats were mod on Fifth Avenue.

Airframe manufacturers and those who produce aftermarket fairings claim the devices add aesthetic appeal and can increase an airplanes cruise performance by a few knots. The main drawback of wheel pants is that they prevent the pilot from visually inspecting the brake assembly, which includes hydraulic fluid lines and connections, brake pads, calipers and discs. Another drawback is they can accumulate mud, snow and other material thrown up from a runway or taxiway, adding weight and, in extreme cases, prevent the wheels free rotation.

Many of the aircraft I fly are outfitted with wheel pants, and as a flight instructor I find it difficult to justify their existence to my students. Ive often wondered why wheel pants are not designed such that they could be opened like a clamshell to expose the entire wheel and brake. Instead, most are built like miniature Sherman tanks with only a small spring-loaded door on the side through which a pilot is supposed to be able to inspect the tire and check its pressure.

“Its all kind of a compromise,” said Ron Partridge, technical information service representative at Cessna, which designs and manufactures its own wheel fairings. “You plug in the manufacturing merits with the maintainability and durability in the field and you pick the one that hopes to be the most user-friendly without going overboard on design and engineering.”

Flight schools and clubs will often remove the wheel fairings from their aircraft, which endure considerable abuse from student pilots and renters, therefore requiring tires and brakes to be replaced more frequently than aircraft flown by a single owner. “Theres a certain type of pilot who likes to make the first taxiway,” Partridge said. “You inspect the brake as thoroughly as you can.”

Be Gentle With Those Toes

Brake damage can result when pilots who are used to flying aircraft with nosewheel steering transition to an aircraft with a castering nose wheel. In airplanes so equipped, directional control during taxi is achieved using a combination of rudder pedal inputs and differential braking. Because the pedals are only effective at speeds that allow sufficient airflow over the rudder fin, the slower you taxi, the more you need to rely on the brakes for directional control.

In aircraft with a castering nose wheel, such as the Cirrus SR20 and SR22, it can be a challenge to find a taxi speed that is slow enough to be safe but fast enough to avoid riding and overheating the brakes. In 2005, several Cirrus aircraft were involved in incidents where the brakes heated up during ground operations and started fires. In one incident the right brake of a Cirrus SR22 caught fire following an extended taxi. According to the NTSB, “data downloaded from the engine monitor revealed that the 4100-hour airline transport pilot had taxied the airplane at an average engine speed of 1640 rpm. The data also revealed that during the taxi, the pilot reached speeds up to 29 mph and often reduced speed without reducing the engine rpm.”

Three similar events that year resulted in the FAA issuing Special Airworthiness Information Bulletin CE-05-77, advising SR20 and SR22 owners about the possible loss of braking and fire due to a hydraulic fluid leak at the caliper piston. The bulletin noted that in the damaged aircraft, piston seal temperature limits were particularly high on the right brakes because airflow from the propeller during taxi tended to push the rudder to the right (and hence the nose to the left), causing pilots to compensate with occasional right braking.

Ian Bentley, vice president for products and services at Cirrus Design, said Cirrus calls for “rigorous checks” of the braking system in its aircraft during 50-hour and 100-hour inspections. “We did a very extensive investigation into how much abuse a brake could take,” Bentley said, noting that following the 2005 incidents, brakes were cycled on a test stand 32,000 times without any obvious degradation to the hydraulic seals. “We convinced ourselves that there is absolutely nothing unconventional about the braking system and that this was a pilot issue. The approach Cirrus takes is, what can we do with the product so that if a pilot misbehaves a little bit, the airplane can compensate for those actions.”

Partridge said that larger brakes are not a factory option on new Cessna piston-engine aircraft, but that some STCs may be available through third parties. “The issue that you have on the wheels is space,” he said. “On our 172s and 182s with the six-inch wheel, theres not a lot of space to put additional brake pad.”

The Aircraft Wheel & Brake Division of Parker Aerospace in Avon, Ohio, supplies wheels and brakes under the Cleveland Wheels & Brakes brand name to more than 80 percent of all general aviation aircraft, including those manufactured by Cessna and Cirrus. Otto Miller, air safety investigator for Parker Aerospace, said that pilots, not their brakes, are usually to blame when problems arise.

“I think you have to remember that any brake system has a limited amount of kinetic energy absorption capacity,” he said. That means that if you attempt to operate your aircraft over its maximum gross weight, your brakes may not be able to stop the aircraft in the distance quoted in the POH.

On September 10, 2000, a Grumman AA-5B Tiger skidded off a wet, 4300-foot runway in Ohio after attempting to salvage a fast approach with a tailwind. According to the NTSB report, “the pilot approached at 80 knots, and landed about 300 feet beyond the landing threshold. The pilot then raised the flaps and applied the brakes, but the brakes locked and the aircraft skidded.

About two-thirds down the runway, the pilot aborted the landing. He applied full power, added 10 degrees of flaps and started a climb. The pilot heard the stall horn and realized that he could not outclimb the tree-covered hills located off the end the runway, and elected to crash straight ahead.” The pilot received serious injuries and his passenger died.

Your POH tells you how many feet it should take for you to come to a stop after touchdown, but that assumes a dry, paved surface and a by-the-book approach. Mix it up by coming in hot and high, toss in that extra 200 pounds of golf equipment you thought you had room for in the baggage compartment and now youre a test pilot. A wet or contaminated runway further increases the distance youll need to stop, and can reduce the effectiveness of your brakes. (See the November 2007

There is rarely a good reason to use heavy, if any, braking during the landing rollout if the approach is made at the recommended airspeed to a runway appropriately long for the aircraft. If the approach is unstable for any reason and it looks like you are going to land long, go around.

Of course, all that changes when trying to land on a short runway, or when trying to make the first taxiway. The first key is controlling airspeed: If you cant get the airplane down to at or below the manufacturers recommended short-field approach speed, abort the landing attempt and go somewhere else.

A good short-field landing starts with a good short-field approach. Once the wheels are firmly on the ground, apply maximum braking consistent with the runway surface. Especially when flying an airplane with fixed landing gear, consider retracting the wing flaps-every little bit can help. See the set of tips above for more.

Braking a light airplane isnt even remotely similar to stopping your personal automobile. Once we know and understand the airplanes braking limitations, along with some basic systems knowledge, well find staying on the centerline and out of the weeds in the overrun area a lot easier to manage.

Meredith Saini is a freelance aviation writer and flight instructor flying from the Gaithersburg, Md., area.