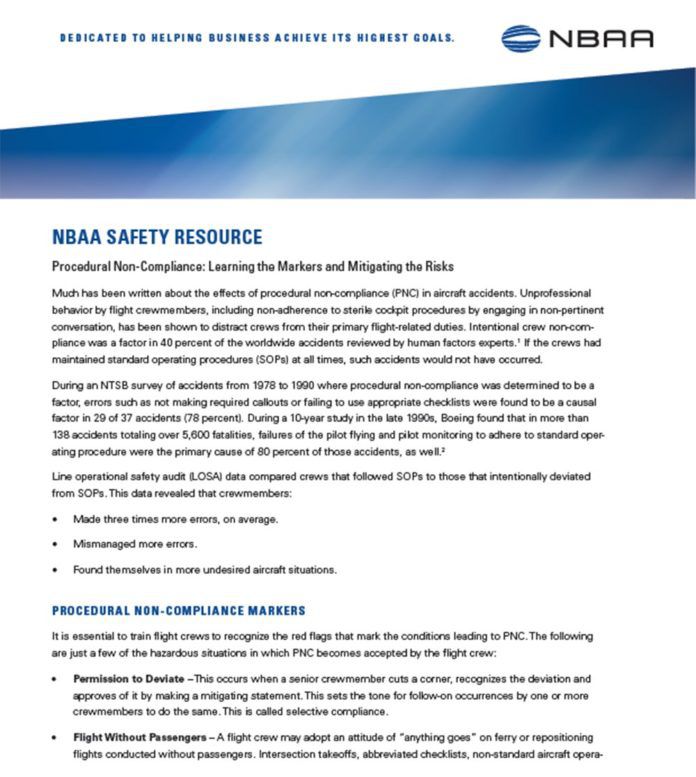 The NBAA Safety Committee developed resources to help address the procedural non-compliance issue. They can be found on NBAA’s web site.

The NBAA materials on PNC list several enabling markers that can lead crews to procedural noncompliance, which can be useful in determining when PNC may exist. The real root causes often boil down to a soft erosion of professionalism, which seemingly grants “permission” for crewmembers to ignore established procedures. The markers include:

This occurs when a senior crewmember cuts a corner, recognizes the deviation and approves of it by making a mitigating statement. This sets the tone for follow-on occurrences by one or more crewmembers to do the same. This is called selective compliance.

A flight crew may adopt an attitude of “anything goes” on ferry or repositioning flights conducted without passengers. Intersection takeoffs, abbreviated checklists, non-standard aircraft operation, etc., may be confidentially allowed by complacent flight crews. This item has been recognized by the FAA in a safety alert for operators (SAFO 07006) that discusses repositioning flights and procedural non-compliance.

Short release times or flights caused by ATC traffic and/or weather can cause the flight crew to cut corners to stay within the normal crew rest and/or duty time and to remain within FAA/company policies.

These flights, which are too tight for due process, can cause the flight crew to nearly or actually exceed their crew rest or duty time, scheduling requirements or operational policies. These pressures, which are caused by the operator’s dispatching, can cause the flight crew to cut corners to stay within the normal crew rest and/or duty time and to remain within FAA and/or company policies. Additionally, the crew may take on an attitude of reciprocal disregard toward authority and procedures when asked to operate outside of stated parameters.

When fatigued or impaired by physiological stress, PNC can develop rapidly. Poor crew communication, getting lost in checklists and failure to conduct thorough flight briefings are common indicators of fatigue.