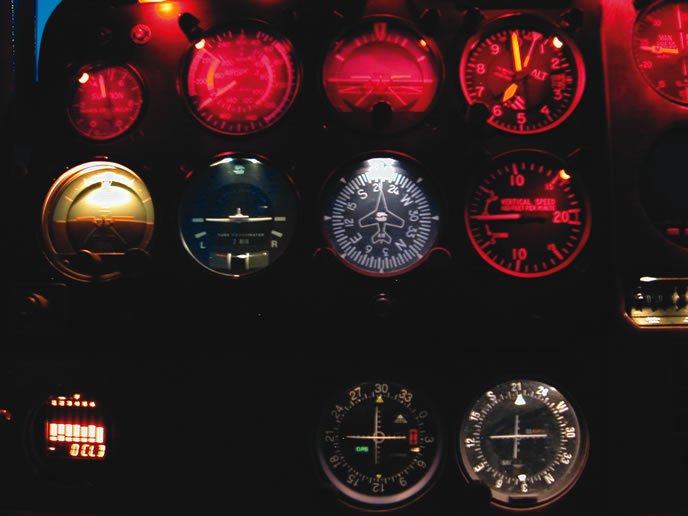 In recent years, there’s been a move away from using red-colored lighting to illuminate cockpits, often in favor of low-intensity greenish-blue light. The reasons are numerous, but boil down to the fact rods in our retinas are most sensitive to that green/blue wavelength. But that’s not the whole story.

The rods are most efficient at low light settings, but aren’t very good at distinguishing colors or details, like instrument readings. In addition to being most sensitive to the greenish-blue wavelength, they are relatively insensitive to red. Conveniently, cones are most sensitive to green light, and the green/blue colors attempt to strike a balance between the rods’ low-light sensitivity and the cones’ acuity. As long as the green/blue light is at a low intensity, using it can help preserve our ability to read the instruments.

But red light also is a compromise. Since the rods aren’t that sensitive to red, they don’t get overloaded at higher illumination levels, and the cones retain enough acuity to distinguish details on instrument faces. When we shift our vision to looking outside for unlit objects—which is where the rods are more effective—they’re not saturated by the red light and remain dark-adapted.

Which is better in the cockpit? We’d argue red instrument lighting is, if for no other reason than it helps preserve our ability to identify dimly lit objects. Also, that’s what we learned on, and it’s more dramatic than something more modern. While there’s certainly a red-light intensity level that begins to saturate the rods, we usually don’t need that much light in a cockpit at night. A green/blue light source, meanwhile, must be kept a low level to avoid overloading the rods. And if it’s too bright, it can interfere with our night vision outside the cockpit. Ultimately, it’s a personal choice, as long as we keep the light intensity at a minimum.

Finally, don’t forget about the cockpit light sources that can ruin your night vision. A too-bright moving map comes to mind, which is one reason many popular solutions feature a night mode, which reverts to basic, darker colors and helps preserve your low-light vision. Also consider flashlights with red LEDs or lenses. And brief passengers to please ask before they turn on a reading light, so you can tell them to wait until you’re on the ground or close one eye to preserve at least half of your night vision.