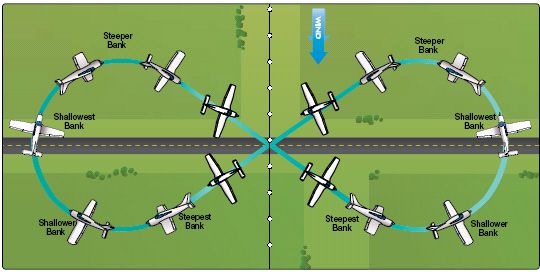 Each of the FAA Practical Test Standards (PTS) for a certificate or rating provide precise performance requirements for successful completion of the practical test-the checkride. The PTS for the Commercial Pilot-Airplane certificate include a number of maneuvers unique to this pilot certificate: Chandelles, Lazy Eights, Eights on Pylons, Steep Spirals and Power-off 180-degree Accuracy Approach and Landings. Collectively these are often called “the commercial maneuvers.”

Its easy to see these “commercial maneuvers” as a bunch of tricks-a series of hoops to jump through to earn the Commercial certificate. If you take the time, however, to consider what skills are necessary to fly each maneuver to its prescribed standard, youll find that application of these lessons may indeed improve a pilots airmanship, and reinforce skills necessary for flying safely, whether for hire or not. So, what are the real lessons of the commercial maneuvers?

The chandelle was created early in World War I as one of the first air combat maneuvers. Then, the objective was for a pilot to get the smallest possible turning radius to wheel in on an enemy or to escape a bandit at his six oclock position. Today, we teach and learn the chandelle to develop pilot coordination, planning and accuracy during a turning maneuver that takes us from mid- to high-cruise speed (depending on the airplane flown) to flight at minimum controllable airspeed.

Some feel that the test of a good chandelle is the amount of altitude gained during the turn. Airplane performance capability and environmental conditions, however, may limit the amount of altitude increase that results from a chandelle. More important is the quality and timing of the turn; note that the PTS doesnt even mention altitude gain as an objective, instead focusing on elements of pitch, bank and airspeed control.

The real-world lessons from the chandelle include:

Fine control of the rudder with changes of pitch, bank, angle of attack and airspeed-good for stall avoidance during all maneuvering, and handy also to obtain maximum performance with an engine out in a twin.

Timing of roll-in and rollout to achieve wings level on a prescribed heading-a good skill for precise airport traffic patterns and in instrument flight.

Minimum Controllable Airspeed as a function of a given power setting and a predictable pitch attitude-translatable to getting maximum climb performance while avoiding power-on stalls during a short-field takeoff or a go-around over obstacles.

The chandelle teaches us to avoid rolling and pitching at the same time. The lesson is valid for large bank and pitch excursions like we see in the chandelle maneuver. The Lazy 8, on the other hand, shows us that we can safely pitch and roll at the same time, so long as we severely limit the rate of change in both axes. Where the chandelle is a rambunctious, macho maneuver of bank then pull, the Lazy 8 is a more graceful exercise in aircraft control.

Begin a very low rate of roll at the same time you initiate a slow rate of pitch change; gradually increase both simultaneously until you reach a maximum pitch when halfway to the maximum bank, then lower pitch as you continue to increase bank. The first quarter of a Lazy 8, then, results in increasing bank and pitch for the first 45 degrees of turn, followed by shallowing pitch with increasing bank for the second 45 degrees.

From here, pitch continues slowly down, below the horizon, while bank slowly decreases for another 45 degrees of turn, then slowly rising pitch while bank angle continues to decrease until the airplane is level in both pitch and bank just as it has turned a full 180 degrees. This is halfway through the maneuver; repeat with an initial pitch up and a shallow bank in the opposite direction.

Challenging to describe on paper, the Lazy 8 is a graceful maneuver to watch and to fly. As the Airplane Flying Handbook (AFH) puts it, the Lazy 8 “is a maneuver designed to develop perfect coordination of controls through a wide range of airspeeds and altitudes so that certain accuracy points are reached with planned altitude and airspeed…. It is the only standard flight training maneuver during which at no time do the forces on the controls remain constant.”

As such, the Lazy 8 may be the ultimate graduation test of a seasoned (non-aerobatic) pilot. The hardest part, in my opinion, is the small control inputs required to successfully fly the maneuver-its far easier to make large control inputs that wont cut it in the Lazy 8.

Some other “real world” lessons from the Lazy 8:

Rapid integration of visual and instrument flight-you cant bank five degrees or adjust pitch by three degrees entirely with the horizon, while you cant adjust your maneuver to roll out referring to ground references on instruments. The Lazy 8 requires including visual and panel references in your scan.

Rudder coordination as instinct, not in response to the slip-skid indicator.

Using rudder not as you may expect it, but as you need it-in many airplanes it takes as much left rudder in a descent as it takes right rudder in a climb. Most pilots arent used to pressing on the left pedal…but there may be times when it is needed and we need to be willing to do so.

Eights on Pylons (sometimes known by the more elegant “Pylon 8s”) are, according to the Airplane Flying Handbook, “the most advanced and most difficult of the low altitude flight training maneuvers. Because of the various techniques involved,” the AFH continues, “the pylon eight is unsurpassed for teaching, developing and testing subconscious control of the airplane.”

The result is a maneuver that focuses the pilots attention almost completely outside the cockpit. For safety and success, then, control of the airplane must be almost instinctive, with bank, pitch and rudder control correctly varied or maintained without looking at the flight instruments. As such the real-world benefits of flying Eights on Pylons include:

Rudder coordination by feel and by anticipating the airplanes rudder requirement in turns, climbs and descents.

Bank control to include correctly compensating for a stable airplanes overbanking tendency when exceeding about 30˚ of bank.

Altitude control without scanning the instruments, to include slight increases and decreases in altitude to meet the pivotal altitude requirement.

Division of attention, a good skill for all flying.

Drift control and its effect on groundspeed…useful in the traffic pattern.

A marketable skill for the aerial photography or aerial spotter pilot (or if you should ever pilot a C-130 gunship).

The steep spiral is an on-again, off-again Commercial maneuver, one that has been deleted from the PTS and then re-added in fairly recent years. Purpose of the steep spiral is to prepare the commercial pilot applicant for a power-off landing in the event of an engine failure. It combines the Private-level concept of Best Glide airspeed with the wind correction and planning of Turns Around a Point to “[dissipate] altitude while remaining over a selected spot in preparation for landing, especially for emergency forced landings,” according to the AFH.

A steep spiral is a constant-radius gliding turn, approaching the limits of a “steep” turn at its steepest, downwind point, for keeping the airplane as close as possible to a desirable landing spot. The pilot must constantly evaluate the effect of wind and adjust bank angle as necessary to stay at a constant distance from the landing zone. Airspeed must remain constant for best glide performance.

In addition to the obvious planning and orientation during an engine failure, flying a PTS-compliant steep spiral reminds the pilot:

Bank angle must increase with a tailwind and decrease with a headwind to maintain the same distance from a ground object. This

reinforces shallow bank angles in the turn from base leg to final approach in a typical, into-the-wind traffic pattern.

Pitch attitude must remain constant to result in a consistent airspeed for a given power setting, even if that power is simulated “zero.”

Increasing bank angle for a given airspeed reduces performance…at “best glide” speed, turning increases the rate of descent, making the airplane less able to cover distance in a glide. “Best glide,” however, gives the best possible forward distance in a glide for any given bank angle.

A good approach to landing can be made much closer to the runway than many pilots fly by the time they pursue their Commercial certificate…which brings us to the Power-off 180-degree Accuracy Approach and Landing.

This final “commercial maneuver” may sound like another circus trick, but within it hides the basis of consistent, smooth and accurate landings for the soon-to-be Commercial pilot. The Power-off 180˚ Accuracy Approach and Landing (lets call it the PAAL) is designed to “develop judgment in estimating distances and glide ratios,” according to the AFH. From the downwind leg and abeam the touchdown zone, pull the power and glide to a landing. This may require the use of flaps and, in retractable-gear airplanes, will necessitate extending the gear at some point that still provides sufficient glide capability to make it to the runway. The PAAL is a high, tight approach, closer to the runway than most people fly…and it shows:

The normal approach should be flown fairly tight if a pilot has any hope of making it to the runway in the unlikely event of an engine failure in the traffic pattern.

Extending flaps will change the glide characteristics of the airplane, good to know for normal and especially short-field landings in addition to the engine failure scenario.

Putting down retractable landing gear will also dramatically affect glide performance, something to know for normal and emergency operations.

The PTS requirements also emphasize aiming for a precise touchdown point and hitting it or a point slightly farther down the runway, but do not permit landing short of the original goal-helpful in short-field operations.

The so-called “commercial maneuvers” may seem like isolated circus tricks to be mastered for the practical test, but with little relevance to daily flying. Its often quipped that ATC will never ask a pilot to “give me a Lazy 8 out there.”

The lessons of the commercial maneuvers, however, go far deeper than just getting through the checkride might imply. Each maneuver explores key aspects of aircraft control, division of attention and pilot judgment-exactly those skills that keep us safe in airplanes. Whether you intend to carry passengers for hire or you never plan to pursue a commercial flying career, perfecting these maneuvers will make you a far safer pilot.

Tom Turner is a CFII-MEI and Master CFI who frequently writes and lectures on aviation safety.