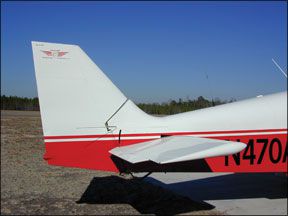 Theres little else quite as ingrained in the minds of pilots, or emblematic of flight itself, as the stick and rudder. It seems axiomatic that losing the ability to control an airplanes roll, pitch or yaw would set you up for a quick toboggan ride downhill, followed by a very loud noise. Does the thought of helplessly watching your airplane wrenching itself into an unusual attitude and then plunging into a schoolyard turn up those horror movie violins? Well, even your best preflight might not immunize you from having a control surface failure, but knowing what to do and taking prompt action could prevent one from ruining your day.

Next to an in-flight fire, control surface failures rank pretty high on the list of things that would put any pilot into auto-flail mode. They come in several nasty varieties, depending on whether it happens to your ailerons, elevator, flaps or rudder. Well look at elevator control failure mostly (though Ill discuss the others), because in one way it could be considered the most potentially catastrophic among them.

Incidentally, for those helicopter pilots among us (including myself), I offer a weak apology, as helicopters in general dont have articulating secondary airfoils at the trailing edges of their primary ones (which are already rotating at breakneck speed). Although there are trim systems, about the only survivable kind of rotorcraft control surface failure that I could think of would be a loss of tail rotor effectiveness, and even this would usually involve an emergency autorotation.

Most airplanes have fixed appendages, but its the hinged control surfaces on their wings and tail feathers that allow them to climb and maneuver in three dimensions with precision. Depending on the manufacturer, these surfaces are connected to the cockpit controls by a combination of cables, pulleys, pushrods and bellcranks hidden in the nether regions of the fuselage, wings and tail, largely out of sight.

Of course, we know they have been well designed and, for the most part, were satisfied with checking just the hinge pins, counterweights, and other exposed moving parts when we preflight control surfaces. Short of turning every preflight into a 100-hour inspection, we would have to be.

The fact is these control systems are not all hermetically sealed clockwork-like mechanisms. Stuff can and will happen. While our A&Ps back is turned, something can snag, fray, disengage or otherwise compromise our trusty steeds evolution beyond early designers attempts to control their products via wing-warping and weight-shifting.

For example, an uncommanded roll can too-quickly develop into an unusual attitude, and an airplane without an effective rudder has little defense against a spin. Suppose a ball joint somewhere cracked, or a pulley froze from inadequate lubrication and a cable jammed. Or suppose that missing Phillips screwdriver finally slides around enough to jam a bellcrank. Think it cant happen? Guess again.

Your defenses are preparedness, recognition and prompt action. Its like they always say: First, fly the airplane. You still have control in the other axes, most likely, so fly them gingerly. That trim wheel (or button) just became your new best friend.

Second, though theres “no place like home,” if home means a 2000-foot runway, dont go there! Point yourself at the nearest and longest runway you can find.

Third, get on the horn and holler “Mayday!” Use whatever frequency youre on first, then 121.5. Squawk 7700 on the transponder. And hit the “Ident” button for good measure.

There are two types of elevator control failure. The first is if the actuating mechanism or linkage breaks or otherwise becomes disconnected. The other kind is a jam.

If the elevator becomes completely disconnected, it will be free-floating. In this scenario, you can use the trim wheel just like you do in ho-hum flying. Imagine the wheel is your airplane. With a free-floating elevator, the airplane will pitch in the same direction you spin the trim wheel: Nose down to descend, nose up to climb.

On the other hand, if the problem is a jammed linkage, the trim tab itself will become a baby-sized elevator and control should be reversed, though the slack in systems using cable instead of pushrods may allow only minimal control. Its up to you to quickly and gingerly find out which variety you have just acquired. Thankfully, the airplane will tend to continue flying fairly close to whatever speed at which it jammed, if you do nothing. Of course, this is great if youre in cruise flight at the time; its not so great if youre maneuvering or on short final.

While still at altitude, apply a brief jab or two on the stick or column forward and back if youve got the “jammed” version. That might just solve your problem if something not too tenacious happened to get in the way and things just might suddenly get less sticky.

Lastly, make a shallow approach to that two-mile runway. Since pitch is very sensitive to flap position,

do not use flaps! Ground effect usually induces a nose-down change in pitch, so be prepared to use small power changes (and trim) to cushion your landing. Once your wheels are on the ground, everything is back to normal well a few hours later, maybe. Coping with the loss of your elevator can be terrifying. It doesnt ever have to be fatal. Staying cool and knowing how to use that trim tab can make all the difference.

The best preparatory head work you can do involves reading about this stuff like you are now and thinking about it until theres nothing about it that seems the slightest bit mysterious. This includes poring over your airplanes AFM or POH until you completely understand its control system, how it works and what happens when certain components fail.

You may also want to look through your types maintenance manual for additional tips, not the least of which would be how to ensure the systems proper care and feeding.

The most important things are: preparedness, recognition, and prompt action. Part of preparedness in this case is also active mitigation: During your preflight and pre-takeoff checks, examine every movable part for signs of excessive wear and proper range of motion. That includes bearings, tracks and linkages.

If the worst should happen, first, fly the airplane gently. And again, dont panic. In the case of an asymmetric lowered flap (see the sidebar on the opposite page), it will cause a roll moment away from it, and an adverse yaw moment towards it.

Why the roll? Thats because lift just increased on that side. Why the yaw? Its because of the drag, of course. Whats the remedy? Simple: just counter the roll with ailerons, and use rudder to keep the nose pointed straight ahead. If youre in a twin, you can also use asymmetric power.

Using the ailerons (see the sidebar above) is instinctive. Its the opposite rudder and a slight slipping condition that needs some forethought.

Then, head toward a nice long runway and, if the situation is only a

Split flaps are scary, especially when they occur in a bank. For this reason, many advise against extending or retracting flaps while in other than straight-and-level flight. Heck, any of this kind of stuff would be most unwelcome. Quality preflight inspections and thorough maintenance of all primary and secondary control systems can help, and incremental flap application should become habitual.

Keep all these things in the back of your mind. Heres hoping they never have to come in handy.