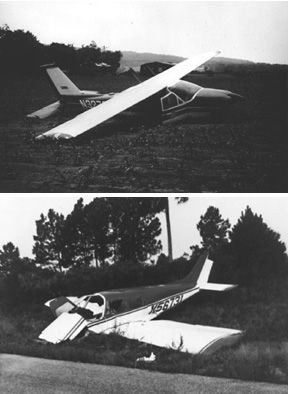 There are two ways to prevent serious injuries in aviation. The first and most obvious is preventing the accident in the first place. The second way is to protect aircraft occupants through accident survival design features and procedures.

Its a sad but unfortunate statistical fact that many good pilots will suffer accidents. All pilots – even those who are meticulous and conservative in their decision making – need to be versed on how to prevent serious injuries during an imminent impact. This is a topic that receives scant attention during initial and recurrent training, but is obviously important.

Hard Impacts
I recently studied survivability in Part 135 aircraft accidents. The study encompassed 147 accidents that occurred over a 10-year period. The good news is that 49.5 percent of the aircraft occupants in these accidents survived without injury, with another 18 percent suffering only minor injuries.

Now for the bad news. Eleven percent suffered serious injuries and 21.6 percent died. Nearly 90 percent of the fatal injuries were caused by impact forces. The lesson is clear. If you as the pilot can reduce the impact forces during an accident, you and your passengers face much higher probabilities of surviving.

These statistics carry some significant lessons. First, the impact forces must be within the tolerance level to prevent serious injury. Second, the aircraft must be under control when it hits the ground. The good news is that the pilot has a great deal of control over both of these factors.

Everyone has seen videos of automobile safety testing. The damage done to the vehicle at 15 mph is rather eye opening. Naturally, vehicles going faster suffer even greater damage. Every highway patrol trooper begs car drivers to slow down, for good reason.

In simple terms, its very important to minimize the kinetic energy at impact, and kinetic energy is a function of the airspeed multiplied by itself. This magnifies the effect of any additional airspeed. For example, there is a 40 percent difference in kinetic energy just between 55 knots and 65 knots.

This concept inevitably leads someone to believe that slowing down the aircraft until it literally stalls will increase the chances of surviving an accident, but its not as easy as that.

This helps explain one anomaly in the fixed-wing data. Spin accidents, which have a very high vertical component, have an 82 percent fatal accident rate.

Sure It Matters
The average human body is able to tolerate a 45 g deceleration rate straight ahead – if that person is fully restrained with a lap belt and shoulder harness, assuming a 250 g per second onset rate. Beyond this, injury is likely. Vertically, we can tolerate about 15 gs – a third of the horizontal tolerance. Fixed-wing seats and seat belts are designed to restrain the individual better for a horizontal impact for these two reasons.

Light aircraft certified under FAR Part 23 are required to undergo complex dynamic tests during certification to prove that the cockpit and seats can withstand these forces. One of the tests requires the aircraft to be pitched up 60 degrees with respect to the aircrafts flight path at impact. The front portion of the cockpit and the seats must withstand at least a 31 feet per second change in velocity and a 19 g deceleration rate.

An additional test has a flat pitch attitude with a 10-degree nose yaw with respect to the flight path at impact. The front seats and structure must withstand at least a 42 feet per second change in velocity and a 26 g deceleration rate.

Other airplanes, generally cabin class twins and light jets, have sideways facing seats. Sideways, the body can tolerate even less deceleration, only about 9 gs. I dread thinking of how bad the injuries would be to passengers sitting sideways. Sideways seats are by far the least survivable position, all other factors being equal. If you happen to fly a cabin-class aircraft, this is a definite factor to consider in your seating selection.

Your passengers have far better chances of emerging unscathed if the impact occurs in the forward/backward direction than the other directions. While this is important in the design process, it should play a major role in your aircraft control during the final seconds before impact. Any action that might increase the vertical deceleration rate should be avoided, if possible.

That does not mean the same as the popular notion of touching down as slowly as possible.

For example, lets take a light twin that is gliding in at 85 knots for an emergency landing. Lets say that when the aircraft hit the ground, the aircraft slid about 150 feet. The bottom of the fuselage collapsed and the ground scar was about one foot deep.

Just keeping the calculations simple, the horizontal deceleration would be a comparatively mild 5.4 gs – well within the non-injury envelope. The vertical deceleration would be roughly 14.2 gs, which is just inside the non-injury envelope. Obviously you can see that we had a far greater margin from the injury threshold in the horizontal direction than we did in the vertical direction.

Now lets say the pilot decided to slow down the aircraft to near the stall speed. When you slow below the min sink speed, slowing down actually results in a higher sink rate. In our example with the light twin, this would have increased the vertical velocity to about 40 feet per second – and that would increase the vertical deceleration rate in to some 25 gs. There is a high probability of spinal fracture at that deceleration rate.

The bottom line is that its vital for the pilot to continue flying the aircraft into the impact at the recommended airspeed and touching down under control. Stalling the aircraft will actually result in far higher impact forces in a less tolerable direction and greatly increase the chances of injury.

The other factor that helps determine the impact loading is the amount of time it takes for the impact force to dissipate. The reason why is easy to see. A favorite undergraduate engineering exam is to challenge engineering students to design a structure that allows them to drop an egg from the top of a building and land without breaking.

Every competitors egg is dropped from the same height, so without something like a parachute, each egg will reach the ground with approximately the same velocity.

Now, would you prefer your egg to land on the hard pavement, or a soft pillow? Obviously the soft pillow would give a better chance of the egg remaining intact because the impact energy is spread out over a longer period of time, and thus the impact g is much less.

Its the sudden stop that really increases both the g load and the chance of injury or death. This is why you see movie stuntmen who jump off of buildings land on those large air bags. Even though they strike the air bag with considerable speed, the large volume of the air bags helps to gradually (well, relatively speaking) decelerate their body over a longer period of time as opposed to smacking the sidewalk. Note also that they try to land on their backs with arms outstretched to dissipate the impact in the most favorable fashion.

How does this apply to those in an airplane? Unfortunately there arent any mega-pillows out there to catch the airplane, although a ballistic parachute recovery system comes close. That forces you to use other tools to help absorb some of the energy.

When I plan my flights in general aviation airplanes, I definitely take into account the nature of the terrain. In a twin-engine turbine aircraft, its only a secondary factor.

My personal stress factor is a lot lower when Im flying a single if my route takes me over nice flat farm fields. I like having the ability to glide into a nice flat soft field if I have an emergency. Unfortunately, thats not always possible.

In the Part 135 study, 37 percent of the accidents that landed in water resulted in fatal injuries, though many of those impacts were during IMC and the pilot had lost control. I think a big factor associated with those injuries was the lack of aircraft control at impact, which would greatly increase the impact forces. An earlier Aviation Safety study on controlled ditchings put the fatal accident rate in the low single digits – when the pilot keeps positive control during the ditching.

A lot of pilots live and fly over urban areas, which offer precious little hospitable terrain for an emergency landing. Roughly 33 percent of the accidents in an urban area resulted in fatal injuries.

How about landing in treetops to let the foliage absorb some of the energy? While that may work, 37 percent of the accidents in trees resulted in fatal injuries. Again, its clear from this and other Aviation Safety studies that the fatality rate is jacked up when the airplane isnt under control at the time of impact.

Trees carry with them the danger that objects may intrude into the cockpit space during the impact sequence, which would certainly increase the chance of serious injury. As with any impact, its important for the pilot to keep flying the aircraft into the impact rather than attempting to stall the aircraft into the trees. Our physiological tolerance for vertical forces – plus the aircrafts structure, seat design and seat belts – is aimed more for the horizontal motion than the vertical motion.

Surviving an accident requires many other important qualifications. The cockpit must remain intact or nearly so through the accident sequence. It must avoid penetration by objects. An appropriate volume of living space must be preserved around the occupants.

Since there is a limited space between seats, controls and instrument panels, the seats must absorb some of the impact force while still retaining their position. The seat belts and shoulder harnesses must restrain the occupant in a correct position. This implies that the seat belts and shoulder harnesses should be properly positioned on the occupant in the first place.

Debris and loose items should be secured to prevent them from becoming projectiles and causing blunt force or penetrating trauma. Even if livable volume is maintained, prompt escape may be necessary. That requires an egress route that is still usable to the occupants, even if they are injured.

The occupants need to survive the deceleration without injuring their limbs so they can still move debris, unfasten seat belts and operate doors or windows to escape. The chances of a post-crash fire can be high, especially since the vapors from spilled aviation fuel can permeate the accident site, and sparks from battery cables can provide the ignition source.

If any of these events fails, then the chances of serious injury go up dramatically. Sadly, these important topics are also frequently neglected during initial and recurrent training.

Also With This Article
Click here to view “Tricks and Traps.”

-Pat Veillette is a safety researcher and transport pilot at a large carrier.