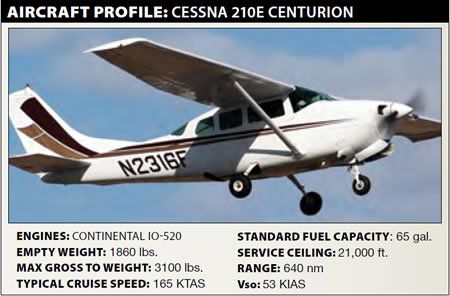 Traffic patterns aren’t that hard: Fly a rectangle. One side is the downwind; one side has the final approach and departure paths. Simple, right? Not really. One of the problems is all those turns we have to make align the airplane with the runway or the downwind. And some of those turns are close to the ground, at relatively low speeds and are poorly executed. Sadly, the results of steep turns to final—especially when overshooting the runway’s extended centerline—can be fatal.

That’s the classic set-up for a cross-controlled stall, one in which the airplane is overbanked and the pilot then adds opposite aileron to counter while maintaining rudder in the direction of the bank. Since they can happen quickly, stall warning systems and the wing’s natural burble may not give adequate notice of what’s about to happen. At altitude, cross-controlled stalls are easily recovered, but there often isn’t enough air under us to pull it off in the pattern. So the idea is to prevent them.

The trick is that we shouldn’t need a steep bank in the pattern if we plan correctly. That generally means initiating the turn to final early enough that a quartering tailwind from upwind the runway won’t blow us past the extended centerline. You may have to widen out your downwind, eliminate the base leg altogether and make a continuous turn from downwind to final, or both.

Whichever you choose, your first clue you may need to make a choice is a high groundspeed on downwind. The next clue is whether that wind also is blowing you toward the runway. If you need to point the airplane’s nose away from the runway to maintain distance from it on the downwind, you could be at risk for a cross-controlled stall. That’s because winds from that direction will produce a higher groundspeed on base than normal, and deciding when to turn final based on time alone can see the airplane blow through the extended centerline.

While avoiding the need to fly back to the final is preferred, so is flying an angled approach to the runway, with only a relatively shallow turn needed for alignment. Or go around, which is what the pilot in this month’s accident could have done.

On April 19, 2013, at about 1655 Eastern time, a Cessna 210E Centurion was substantially damaged when it impacted trees and terrain on final approach to the Williamsburg-Jamestown Airport (KJGG) in Williamsburg, Va. The commercial pilot and passenger were fatally injured. Visual conditions prevailed, although an IFR flight plan was filed for the flight, which originated about an hour earlier in Maryland.

In addition to his commercial ticket, the pilot held ratings for single- and multi-engine (centerline-thrust) land airplanes, plus an instrument rating. He reported a total of 336 civilian flight hours a month earlier, but also had 4297 hours of military flight time. The 1655 weather observations at KJGG included wind from 180 degrees at 14 knots, gusting to 28 knots, 10 miles’ visibility, a clear sky and temperature/dewpoint of 28/19 degrees C. A broken line of thunderstorms and rain showers associated with a frontal system was approaching from the west. An Airmet had been issued for moderate turbulence and low-level wind shear.

The single runway at KJGG is oriented 13/31. The traffic pattern calls for right turns when using Runway 13. Based on the reported winds and runway alignment, plus the pattern’s turn direction, the pilot was setting himself up to be blown beyond the runway’s extended centerline while on base and turning final unless he planned for it and compensated.

According to witnesses, the airplane passed beyond the extended runway centerline when the pilot reported on the common traffic advisory frequency that he was turning from the airport pattern base leg to final approach for Runway 13. The airplane entered a steep right turn toward the runway, pitched down and descended at a steep angle behind a tree line.

The airplane came to rest about mile and 310 degrees from the approach end of Runway 13. All major components of the airplane were accounted for at the scene. The airplane impacted terrain in an approximate 85-degree nose-down attitude. The right and left wing flaps and ailerons remained attached. Aileron flight control continuity was established to both ailerons from the cockpit. Elevator, rudder and elevator trim continuity were confirmed from their respective flight control surfaces to the cockpit.

Several tree branches at the accident site exhibited about 45-degree clean cuts. All three propeller blades exhibited chordwise scratching and minor s-bending. The magnetos were dislodged, but the ignition leads remained intact. Spark was produced at all leads when the magnetos were rotated by hand. The fuel pump rotated freely with no signs of binding, and the fuel screen was clear of debris.

The NTSB determined the probable cause(s) of this accident to include: “The pilot’s failure to maintain airplane control during a base-to-final turn with a gusting wind and potential turbulence/wind shear, which resulted in an aerodynamic stall and collision with terrain.”

That’s an accurate summary of what likely happened, but doesn’t consider the warning signs this pilot didn’t notice and for which he didn’t compensate. The right traffic pattern is non-standard, and it could have been a distraction, but we all should be able to fly a proper right downwind. He probably didn’t realize how close to the runway he was before turning base. Once he figured it out, a steep, coordinated right bank followed, then left aileron was applied to control the bank without relaxing the rudder. Oh, and he probably pulled back on the power and raised the nose a bit to slow down, giving him more time to correct. Maybe a gust hit about this time, perhaps increasing the wing’s angle of attack.

The result is too common: Without much warning, the airplane entered a cross-controlled stall and an incipient spin. At maybe 400 feet agl, there wasn’t enough air underneath the Centurion to recover.

As with so many other accidents, this one had a chain of events. The gusty weather, right traffic and a quartering tailwind on downwind, blowing the airplane toward the runway. Failure to compensate for the wind on downwind basically put the pilot in the position of trying to salvage a bad situation. Going around was the best choice.