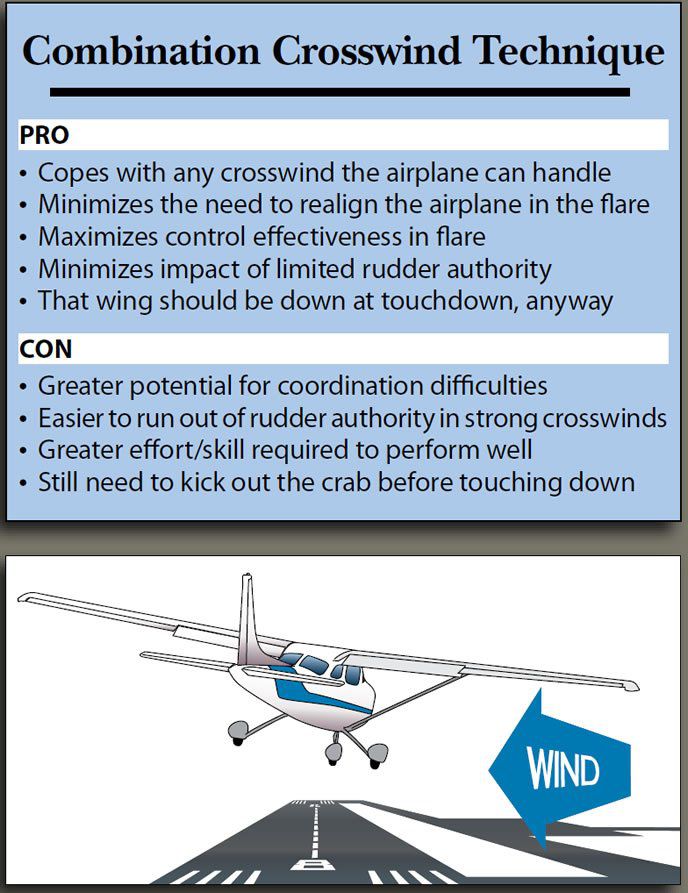 Don’t stop to think, just answer the question: When flying a crosswind approach to landing, which compensation technique do you use, a sideslip all the way to the runway, touching down first on the upwind main wheel? Or do you “crab” into the crosswind, kicking it out at the last second to align the airplane with the runway as it touches down?

The thing is you probably do both at one point or another on the approach. And when the wind really blows across a runway, using both techniques simultaneously can salvage an otherwise-improbable landing. Considered alone, each have their strong and weak points, and demand different skills, but they’re nothing more than two different ways to solve the same problem.

That problem, of course, is the air through which our airplane is moving usually has its own motion. For landings, we want that air moving from the opposite end of the runway, but it doesn’t always cooperate. It can gust, change direction and generally make the already-complicated task of landing more so. And as much as we may want our flights and, especially, our landings to feel to a passenger as if the airplane is on rails, it’s almost impossible to achieve that goal when executing a crosswind landing.

At the end of the day, it really doesn’t matter all that much which of the two techniques we use. In fact, I’ve been known to use both on the same approach: Start out crabbing and then transition to a sideslip attitude all the way into the flare. That sequence allows me to gauge the crosswind early, as I roll out of the base-to-final turn, and it’s actually a bit easier to fly. As the last notch of flaps is added and the landing checklist is complete, I’ll transition into a sideslip, and hold that into the flare. Works well every time, for me at least.

The thing is, we’ll likely never be able to fly a crosswind approach and landing as if the airplane was on rails because the wind likely will change in velocity as we descend. We should get a feel for this as we fly the pattern and compare what the wind is doing to our ideal, rectangular ground track and by comparing what the wind is doing to the airplane with what the windsock is telling us. But we don’t always have time, or are shooting a straight-in after breaking out on an approach. So we need to be able and prepared to use both techniques at the same time.

A sideslip is performed by lowering a wing into the wind—establishing a slight bank—and use rudder to cancel the turning moment and maintain our desired heading. The amount of bank we need is determined by the crosswind’s strength—if we see that we’re drifting downwind, we need more bank to maintain runway alignment. With a greater bank angle, we’ll need some additional rudder input, to straighten us out and, again, maintain runway alignment. The method is depicted in Figure 1, below.

The only real trick to using the sideslip crosswind correction method is the need to coordinate an uncoordinated airplane attitude. That’s where a lot of people fall down in trying to nail crosswind approaches and landings with a sideslip. It can seem unnatural to fly with one wing down while holding opposite rudder, but that’s what we need to do to compensate for drift using this crosswind correction method.

While the need to coordinate an uncoordinated attitude is the hard part about using a sideslip, the easy part is when we’re just above the runway and flaring, we don’t need to do much of anything to maintain runway alignment except flare. The hard part—as it can be with many pilots—involves effective rudder use. We need to be comfortable using the rudder to its full travel limits when employing the sideslip method. In fact, the only real trick to using the sideslip is, depending on the airplane, the wind and host of other variables, we can find ourselves flying a sideslip approach down the final and, in the flare, run out of rudder authority. We’d guess this is a factor in many runway loss-of-control events, probably more than actually is reflected in accident reports.

The “crab” technique—where the nose of the airplane is pointed into the crosswind to counter for it—allows us to maintain a wings-level attitude down the final and into the flare. It’s generally an easier maneuver to fly than when using the wing-low, sideslip technique, but doing it well requires us to accurately gauge when we need to straighten out the airplane and align it with the runway centerline, “kicking out” the crab angle, as it’s known. It’s depicted below, in Figure 2.

And knowing when to kick out the crab is important. Touching down with the nose pointed away from the centerline—and away from the airplane’s flight path—can impose sideloads severe enough to break the landing gear if we land hard enough. If we kick out too late, we’re definitely asking for severe sideloads. If we kick out too early, meanwhile, we’ll likely drift toward the downwind side of the runway. Unless this drift is corrected in the flare—by banking into the wind or ruddering ourselves back to the centerline—once again we run the risk of imposing unwanted sideloads.

Our kick-out maneuver ideally will occur as we flare, aligning the nose with the runway centerline, removing the crab angle and touching down all at the same time. Doing all these things simultaneously requires some skill and practice, and can be difficult to nail. We’d guess many pilots having trouble with their crosswind landings might want to think about how they manage the kick-out and flare maneuver.

One of the keys to transitioning from the crab to a runway-aligned flare is to use coordinated control inputs. We’re changing the airplane’s heading, if only by a few degrees, and that should translate into a gentle bank in the desired direction, along with some rudder input designed to keep the ball centered. At the same time and unless we’re doing this perfectly, we likely will need to establish at least a hint of sideslip by lowering the upwind wing and maintaining directional control with rudder into the flare. To me, the need to use something of a sideslip, anyway, to align the airplane with the runway centerline and minimize sideloads is the argument in favor of flying the approach and flare with a sideslip.

The truth is, no one really flies a “pure” sideslip or crab crosswind technique—there’s always an element of both in our crosswind landings if only to manage small changes in bank and heading as the wind and airplane configuration/speed change. So, why not just refuse the framing that we must choose one or the other and be done with it?

Combining the two techniques affords us the best of both worlds. For one, by crabbing and sideslipping, we likely can handle any crosswind the airplane can handle. We’re not as likely to run out of rudder authority in the flare, for example, especially if we’re sure to coordinate its use with aileron when we kick out what’s left of our crab.

But most important, using a combination technique dispenses with the idea we must use one or the other, allowing us to use whichever technique we wish to whatever extent we wish. For example, if you’re uncomfortable approaching a runway while crabbed 20-30 degrees into the wind, you can eliminate a lot of that crab by ruddering the nose slightly back toward the centerline and then lowering the upwind wing enough to keep the airplane heading in the right direction. We’ll still need to kick out the crab when we flare, but we’ll already have some sideslip cranked in. And if we do it right by lowering the upwind wing a bit as the crab is removed in the flare, we’ll get about as close as we can to flying a crosswind on rails.

We shouldn’t worry too much about which technique we use, or whether we only use one. They both have their strong and weak points, but they both do the same thing. Thankfully, they also can be combined, allowing us to maximize our confidence even when our skill might not be as good as the results.

The punchline in all this is simple: Establish an airplane attitude and heading appropriate for the runway and conditions, then enter a wing-low flare to land. It’ll be as close to being on rails as we can get.