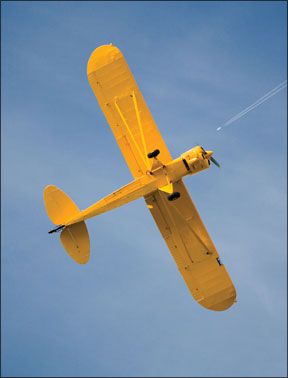 Unless youre someone like Sean Tucker or Patty Wagstaff, or one of the Blue Angels, you probably spend most of your time in the left seat of an airplane flying it straight and level. I know I do, since Im usually going somewhere, even if its only a quick flight to and from a nearby airport to warm the oil before changing it. Meanwhile, we spend a lot of time worrying about the aerodynamics associated with stalls, slips, spins and such, even though we rarely find ourselves performing those maneuvers.

Despite all the necessary and detailed discussion of maneuvering flight, many pilots are not well-versed on the options available to them when trying to cover the distance between Point A and Point B. Sure, climb to altitude, set power, set the autopilot, pop open a soda and, hopefully, listen to something other than ATC for a few hours. But how best to balance groundspeed against fuel consumption? At what speed should you be flying to stretch your fuel supply? And-something pretty basic-how to transition from a climb to straight-and level? Lets take a look.

There Is No Step

For the longest time, whenever a group of pilots got together, they often ended up talking about what it took to get one type of plane or another “on the step.” They were referring to a specific airplane attitude, similar to that achieved when a seaplane rides the water on the flat, aft area of its hull or floats where drag is minimized. Achieving this attitude, so the theory goes, allows a higher cruise speed for a given power setting.

Step advocates believed the magical and mystical airplane attitude could be achieved by climbing slightly above ones desired cruising altitude, setting cruise power and allowing the airplane to accelerate. Once the airplane was stable, it would be pitched down slightly and allowed to accelerate in the shallow dive, descending to the desired cruising altitude. The theory was the slight nose-down pitch attitude-and higher speed attained in the shallow dive-could be maintained, minimizing drag for the chosen power setting and allowing a higher cruise speed than might be obtained otherwise.

There is no such thing

Instead, there is a right way and a wrong way to transition from climb to cruise. Whether you employ the method described above or if you directly level off at your desired cruising altitude on reaching it doesnt really matter. Presuming the airplane is being flown on the front side of the power curve, lowering the nose to an attitude approximating that necessary for cruise flight-while leaving the power set for the climb-will result in the airplane finding its own cruise attitude and airspeed in short order.

At that point, all you need to do is set your desired cruise power-if other than what you used for the climb-re-trim and watch the airspeed indicator settle into its rightful spot. Once the airplane stabilizes and presuming the power setting remains constant, any airspeed deviation results from disturbing that attitude, regardless of whether the disturbance results from a gust, from pilot input or from a change in the airplanes weight/center of gravity.

Regardless of how we achieve our desired cruise speed, we have to choose one. Our choice, of course, can be as simple as pushing all the power controls as far toward the firewall as they will go and accepting the results. Generally, however, we wont be able to do this very long, since full-throttle/full-rich fuel consumption wont allow it. Neither will our wallets.

Most of us want to go as fast as we can when cruising. Well set up a cruise power setting, one somewhat less than everything-forward full power, lean the mixture appropriately and settle in for the trip. But, sometimes, well want a different power setting. Examples might include a setting for maximum range, one for maximum endurance, one for holding and one for turbulence penetration. How we go about finding those power settings can get us into an overly complicated calculus involving engine and propeller efficiency, airplane gross weight, altitude and atmospheric conditions, plus headwinds and tailwinds. For the flights most of us take, a lot of this is overkill. If, on the other hand, were trying to emulate Charles Lindbergh and make Paris from New York on one tank of gas, it becomes a lot more important.

The sidebar at right explores some of the variables associated with picking an airspeed/power setting combination optimized for either range or endurance-you cant have both. What the chart at the bottom right doesnt show, however, is the power setting we should use for maximum range generally will decrease when the airplanes gross weight decreases as we burn off fuel. Conversely, the power necessary for maximum endurance-already at a minimum setting-wont change. When considering endurance, of course, were just trying to stay in the air; with range, were trying to get somewhere far, far away.

All this theory is well and good, of course, but it doesnt directly relate to your airplane. Or does it? It does in the sense that you always have to fly the airspeed appropriate to your airplane for that days atmospheric conditions, weight and mission. Thats where your AFM/POH comes in.

The effect of altitude on the propeller-driven airplanes cruise performance can be dramatic. As the bottom of the two graphs above depict, a flight conducted at a relatively high altitude and at its most-efficient angle of attack (AOA) will have a greater true airspeed than at a lower level. There being no free lunch, however, well need more power to maintain that AOA.

The reason is fairly simple: Presuming were able to climb to and cruise at that higher altitude, the AOA producing the greatest amount of lift for the least drag (L/DMAX) will produce the same drag as at sea level. Because the air is thinner, less lift (and less drag) is produced establishing the correct AOA. This will require a higher airspeed (true or indicated) than at lower altitudes, thus more power is necessary.

According to the FAAs Pilots Handbook of Aeronautical Knowledge, FAA-H-8083-25 (PHAK), “…an increase in altitude will produce a decrease in specific range only when the increased power requirement exceeds the maximum cruise power rating of the engine.”

Cruising at a higher altitude also requires a greater expenditure in time and fuel in the climb. The calculus of deciding whether its beneficial to climb to a higher altitude is beyond this articles scope, however. It can be a complicated formula comparing the departure and destination airports elevations, forecast temperatures and winds aloft, airplane weight at takeoff and landing, routing changes, if any, and whether the airplane is normally aspirated, turbocharged or turbine-powered.

For the propeller-driven airplanes most of us fly, specific fuel consumption and propeller efficiency are the principal variables determining whether range will increase or decrease with altitude. However, cruising at as high an altitude as the trips length allows, consistent with oxygen and equipment requirements, is always a better bet. Thats because we usually do not cruise at an AOA coincident with L/DMAX, but at one generating greater lift and drag in exchange for speed.

Finally comes the airplanes weight in considering cruise performance. Again, the FAA: “At the beginning of cruise flight, the relatively high initial weight of the airplane will require specific values of airspeed, altitude, and power setting to produce the recommended cruise condition. As fuel is consumed and the airplanes gross weight decreases, the optimum airspeed and power setting may decrease, or, the optimum altitude may increase. In addition, the optimum specific range will increase. Therefore, the pilot must provide the proper cruise control procedure to ensure that optimum conditions are maintained.”

In The Real World…

All this theory is fine and good, but whats a pilot to do when trying to decide an altitude, power setting and airspeed to fly? In my mind, the correct answer depends on three main things: trip length, winds aloft and airspace. Ive been known to fly a 500-plus-mile trip at 2500 feet msl to escape ferocious headwinds at higher altitudes, a route Ive also flown at 13,000 feet to take advantage of opposite direction winds of the same velocity.

When it comes to power settings, I firewall the throttle on the takeoff roll and leave it there until Im letting down for my destination, managing power by manipulating the red and blue knobs. On only one occasion in recent years have I considered pulling back the throttle, slowing down and conserving fuel. That was a flight from Scottsdale, Ariz., to Manassas, Va., I easily could have completed non-stop if Id slowed down. Yes, the winds were that good. In the event, I made a very quick fuel stop outside Oklahoma City to fill some containers and empty another, climbed back aboard and motored on home. It was a long day spent almost totally in cruise at 15,000 feet, watching the world go by. Try it sometime.