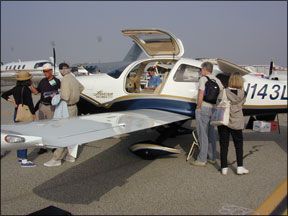 Get any two or more pilots together for a bit of hangar flying and youll hear a lot of interesting tales of aerial travails-some of them actually true, albeit with perhaps a touch of modest embellishment. One topic always standing out as a regular, reliable crowd-pleaser is the story of the errant passenger. Sometimes these are humorous anecdotes passed pilot-to-pilot, with the commensurate amount of growth in awe and severity; sometimes these are more-cautionary stories, told by the first-hand participants or observers with the appropriate degree of warning.

Among my favorites-yes, there have been just a few in my flying days-are the ones of an honest innocence at work. But the moral of almost all of them is to be clear and complete in briefing passengers, novice and experienced alike. Its required by the FARs (see the sidebar), and you just may avoid becoming a subject of a tale of an errant passenger trick gone bad.

It Can Happen to Anybody

Weve all heard the line; it usually goes something like: “Ive always wanted to go up in an airplane.” Or (hint, hint), “Ive never been up in an airplane.” Then, theres the close cousin, “Ive never flown in a little airplane. And Ive always wanted to….” To which, nice guy or gal you are, and proud of your pilot status as you are, the conversation ends up with you extending an invitation to someone to come along for a ride. Maybe, as weve all seen happen, the invitation goes to someone you barely know.

And now youve done it. Youve put yourself on the hook; youre in up to your wingtips. Youre taking up for a flight a general-aviation virgin. What can possibly go wrong? And, on such an innocent flight-a selfless gesture, no less?

Well, before you even set foot in the airplane, before you let that aviation ingnue into the inner sanctum of aeronautics, you might want to think a bit-at least, a bit more than you did before you heard yourself blurting out the invitation.

Theres a chance that innocent ride you just offered will have been to Mr. or Ms. Murphy. And you know what that means: Something will go wrong just because it can.

Chew on This a While

The memory stands out as one of those hard-to-believe events in my aviation life. A pretty young passenger, who had hinted several times about never getting to fly, incrementally transmogrified into innocent, casual flirting…and next thing I know, shes in the right seat as we cruise along the countryside, looking for her house.

Concentrating on flying the airplane and asking for details of the area around her home took my focus off the nice young lady until, right in the middle of answering a radio call, the cockpit exploded in a din of rushing air, swirling papers and headset-overwhelming decibels.

“Wow!” she shouted with sincere innocence referring to the now-open cabin door. “I didnt know that would happen. I just wanted to throw out my gum.” Okay, maybe the passenger briefing overlooked this exact item.

“Man…” was all I could muster, while slowing the plane, opening the pilot-side vent window, and struggling to close and latch the door-again.

Then came the ear-piercing squeal of joy: “There it is!” Somehow, shed spotted her home and she began to shout at the family and friends at a backyard cookout-as if they could hear.

Shortly, with the door firmly latched, I was making mental notes of the obvious items Id overlooked. This was about time she planted a foot on her left rudder pedal and pushed-as she wouldve driving a car. As she said, “I want to slow down so they can see us,” I added one more mental note: Never ride with her in her car.

Of course, at that point, the plane was effectively yawing hard away from the house. So, before she decided to try her hand with the yoke, it was my time to interrupt her moment of tribulation: “Sit back, put your hands in your lap and do not touch anything else!” I forcefully contributed.

The tone and tenor-combined with my voices volume-probably killed the mood for the previously anticipated dinner-and-movie date I had envisioned for aprs flight. But, in the end, nothing got bent and no one had to clean the airplane before the next flight.

That experience changed forever my approach to briefing first-time flyers to include a few things not mandated by the FARs. And the experience also steeled me to the prospect of other silly passenger tricks-things you dont expect done when you least expect them.

The Perils Of Passengers

After volunteering time, airplane and fuel to introduce children to aviation as part of a popular flying associations organized program, a friend of mine noticed the wistful look of a dad whod stayed around the field after his daughter got her flight from a busy general aviation field beneath an outer layer of the Dallas/Ft. Worth Class Bravo.

“My Dad has never been up,” the charming 10-year-old confided to her pilot. “Hes wanted to try flying forever and told me how lucky I am to get this flight. Thanks!”

Swelled with his sense of generosity, my buddy gave in to his feelings and decided to offer “Dad” the same opportunity the daughter just received. After a couple of “I couldnt,”s and a “Thats too much,” the daughter chimed in, “Daa-aad…Go for it!”

Next thing said friend knew, hes on the horn with approach to enter the Bravo for a round-robin aerial tour of the Metroplex. Dialing in the next frequency from memory, my pilot buddy waited for the hand-off…and waited, and waited….

“Dad,” who seemed as mesmerized by the world inside the cockpit as outside the plane, happened to notice that the radio wasnt on the same numbers as before-so in an attempt to be helpful, he pushed the button hed seen the pilot push: the flip-flop key. And then he said nothing.

After a couple of minutes without hearing the handoff, the pilot called approach and asked about the hand-off; “Uh, theyve been calling for you…” the voice of the next sector controller said with a stern tone. My pilot friend looked at the radio and instantly deduced hed been waiting for the call while monitoring the wrong frequency.

“That would have never happened on a busy weekday. I would have heard the change-but it was relatively quiet that day,” the pilot told a group of aviators that evening as they gathered to water their various thirsts.

“Gives me something new to emphasize in the passenger briefing: Dont touch anything I havent approved you to touch.”

The passenger flying with me was a little short of seeing over the top of the panel until given a seat cushion my bride used for the same reason. The briefing, I thought, was pretty thorough. No more issues for me like on the years-earlier house-finding flight.

As we climbed away from the runway, I mentioned to my passenger my plans to let him handle the controls-if he desired-once we leveled and cleared the airport traffic area.

Apparently, though, he looked at my seating position and decided he was a bit too far back. Thinking hed maximize his time by getting properly situated for handling the yoke, he wanted to pull as close to the panel as I was. So he reached down-as I had taught him-to find the seat latch…while we were still pitched up in a max-performance climb.

When the seat came free and started sliding quickly aft, he grabbed for the first thing his hands could find-yepper, that would be the right-side yoke.

Fortunately for us both, the pins on the seat dropped firmly into the next set of holes aft, having skipped the first pair, and the additional nose-up pitch wasnt as bad as it might have been.

Yet another new item for the passenger briefing.

Flying passengers, especially first-timers, and demonstrating general aviations ease and efficiency is-hopefully-one of the reasons you fly. We always strive for a smooth, trouble-free flight and ensuring passengers know what to expect is a large part of determining what they take away from the experience.

But making sure were around to do it again with another passenger or two is also part of the bargain.

Unfortunately, our aircraft are just enough different from automobiles and even airliners that extra care, extra time and extra patience must be used. Then, theres that pesky FAA regulation-you know, the one we often forget-saying pilots are required to brief passengers on how to comport themselves and what they should expect.

Its not hard, but it does require some concentration and planning. Thankfully, it gets easier with time and experience.

Dave Higdon is a professional aviation writer/photographer and sometime passenger with several thousand hours of flight time who has never, ever, popped open a storm window to take a picture at 13,000 feet over New Mexico without first alerting his pilot.