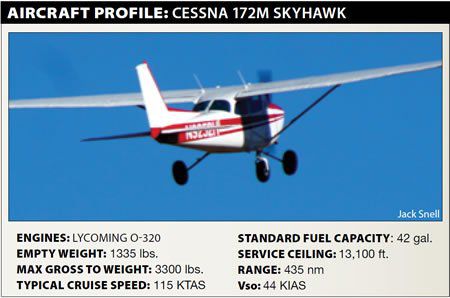 Everyone remembers the first airplane they flew. But what about the second one? Chances are it was a lot like the first one, but still was different. While the make and model may have been the same, the serial and registration numbers were different, of course. Even trivial differences between the two likely was a topic of discussion with your instructor. The conversation may have included how different avionics equipment was installed, or one of them never had a working landing light, or had a prop offering better performance. In an extreme, you could have been mixing makes, models, wing position and avionics. There likely was a moment where you couldn’t find that blemish on the windshield you used as a reference point, or found the throttle too stiff.

In my case, the second airplane I ever flew was a Piper PA-28-140, a Cherokee 140. I was still a student, having soloed in a Cessna 150. Since the 140 had something resembling a back seat, it was a big deal. After some dual and once I was out of the traffic pattern, my first thought was, “Do I remember how to land this thing?” It had only one door, much stiffer rudder pedals, Johnson bar flaps, a two-piece windshield and a small window. It also had the old-style window crank in the overhead for pitch trim. To this day, I can’t tell you which direction is nose-down, clockwise or counterclockwise.

Understanding how different airplanes perform, and how they’re supposed to be configured to achieve that performance should be part of any transition to a different airplane. That training also should involve comparisons to what you’ve been flying, and an emphasis on the differences in procedures, if any. One of those differences can be whether wing flaps are used for takeoff, how much of them should deployed and under what circumstances.

It can be difficult to maintain proficiency in various models of aircraft at the same time. It can be difficult to keep straight how different copies of the same type are equipped, track their maintenance status or learn their avionics. And as we’ll see, basic things like how to use and inspect flaps on a normal takeoff should be a part of any differences training.

On June 21, 2013, at about 1340 Eastern time, a Cessna 172M impacted terrain during takeoff at the Oakland County International Airport (KPTK) in Waterford, Mich. The pilot and three passengers were fatally injured; the airplane was destroyed. Visual conditions prevailed. The local flight was originating at the time of the accident.

At 1338, ATC cleared the airplane for takeoff on Runway 09L at intersection M. Controllers saw the airplane lift off the runway and climb to about 100 feet agl. At 1340, the pilot advised he was “a little overweight” and would need to return. He was cleared to land on Runway 09R or on the grass surrounding the runways. There was no reply. The airplane impacted the ground and a post-crash fire ensued.

The 19-year-old pilot earned his private certificate about 1.5 months before the accident. The pilot’s logbook was never located but his certificate application included 52.3 hours total time, of which 42.2 hours were dual instruction. The majority of the pilot’s flight experience was in the Cirrus SR20. The pilot had reportedly flown a Cessna 172 before, but his time in type, if any, is unknown.

The airplane impacted terrain in a nose-low, left-wing-low attitude. Propeller blades displayed chordwise and spanwise scratches on the camber surfaces. One blade had separated; the separated piece was found in the impact crater, and was bent 90 degrees forward. The other blade bore a slight S-bend along its length.

The wing flaps were fully down, extended to 40 deg. The master switch was on, and the magnetos were on BOTH. The fuel selector handle was separated from the fuel selector valve. The valve was not located, but there was no evidence of pre-impact airframe, powerplant or propeller malfunction. Observed weather included wind from 130 deg. at six knots with 10 miles’ visibility, scattered clouds at 9000 feet and a broken deck at 15,000, plus an overcast at 25,000. The temperature was 28 deg. C., with a dew point of 17.

The airplane had previously been fueled to capacity. Another renter-pilot flew the airplane for about two hours prior to the accident. Based on information from the occupants’ medical certificates and driver licenses, the airplane’s weight was calculated to be 1.5 pounds under maximum gross.

The NTSB determined the probable cause(s) of this accident to include: “The pilot’s failure to retract the wing flaps before attempting to take off, due to his lack of familiarity with the airplane make and model, which prevented the airplane from maintaining adequate altitude for takeoff.”

Both the Cirrus SR20 and Cessna 172M have electric wing flaps. The Cirrus flap switch has three detents: UP (0 percent), 50 percent, and 100 percent. Set the switch to the desired position and the flaps extend or retract as appropriate. An indicator light at each control switch position illuminates when the flaps reach the selected position. The UP (0 percent) light is green and the 50 percent and 100 percent lights are yellow. The Cessna 172M employs a spring-loaded switch that must be held down or up until the desired flap setting is attained. An indicator is next to the switch with markings at 0, 10, 20, 30 and 40 degrees.

The pilot had obtained his primary training from Western Michigan University. The school’s Cirrus SR20 preflight checklist requires the pilot to begin the preflight inspection with the flaps set at 0. The pilot then places the flaps at 50 percent and 100, checking for proper annunciator light illumination. Cessna’s 172M preflight checklist does not require extending flaps for preflight inspection. Cirrus SR20 takeoffs are normally made using 50 percent flaps. Takeoffs in the Cessna 172M are normally made with the flaps up.