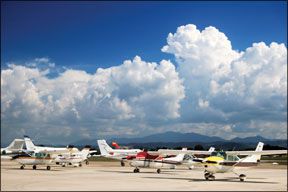 As a professional pilot, Ive often flown over 600 hours a year, and up to 80 hours or so in a month. With all that flying, I log less than 10 approaches to near minimums in a year and probably only one or two are all the way down to actual minimums. This suggests weather is usually reasonably good (Or you know someone at crew scheduling! -Ed.). That, in turn, suggests observing weather patterns and briefly waiting out the worst of it, or leaving a few hours early may be a very

If you take a big look at the general weather patterns across the entire contiguous U.S., youll see a rather marked difference. The eastern U.S. from about the Mississippi River to the Atlantic has a pattern that is often the least flexible, with adverse weather that can be frustratingly stable. Weather not very friendly to airplanes can persist there for days. Still, though, the worst weather-i.e., convective activity-is usually transient.

Next is the area from the Mississippi to the Rockies. This area can get some rather severe weather, too, but the worst of it usually doesnt last long. While you may have to avoid the thunderstorms, tornadoes, ice storms, etc., an early start or short delay will usually make the difference between “dont-go-there” weather and reasonable VMC. Of course, like anywhere, it can still have its periods of low IMC that just hang there with no hope of a quick reprieve.

The next area that we can generalize is from the Rockies all the way to the Pacific coast. Here, other than predictable isolated cells or cell clusters, severe weather is far less common. Indeed, other than the infamous coastal fog layers that can last for weeks, the weather in the West is seldom even IMC for more than a few hours at a time.

The VFR pilot may have a different view of all this, but to the IFR pilot, these are generalities that you can use-with great care-in your flight planning. Even the VFR pilot can benefit as long as he or she understands the limitations. This “wait awhile” idea doesnt mean weather will necessarily go from hard IMC to severe clear in a short time. Instead, it means if you can adjust your planned departure by a few hours one way or the other, youll typically be able to avoid the worst of it. The possible degree of improvement must be viewed in the context of the prevailing weather conditions in that general area of the country and the current weather conditions in the first place, such as the difference between a low stratus layer vs. a line of thunderstorms. It also must be viewed with the wide-eyed understanding what I may happily fly through in my two-person-crew jet transport might not be at all suitable for a recent VFR-only private pilot in a J-3.

We certainly dont advocate hard flight planning based on the idea an hour or two adjustment in departure time will allow you to complete a flight originally facing marginal weather. But in general, if your destination is predicting weather right at your minimums for Plan A, you will often find that leaving early or waiting a short time will see weather change enough you can complete the flight in a much more comfortable manner. But be careful.

The Forecast is Key

Once you have that big picture in mind, look at the terminal forecast for your destination (if your destination doesnt have a TAF, try to find one nearby subject to the same geographic influences). If the TAF shows decreasing conditions, try to leave early enough to get in ahead of them. The flip side? Wait until the back side-wait for the truly low stuff to pass and for the METAR to show improvement-so it wont be a problem. If the TAF shows improving conditions later in the day, simply delay your departure to take advantage of the better weather.

While much of this seems obvious, and it is, the point is that the worst of the weather seldom lasts very long and can typically be avoided by a schedule change of just a few hours if youre smart about it. So, dont just assume you cant make it to your destination and cancel your plans. Instead, expand your planning to look at your desired arrival time plus or minus a few hours to see if it makes a difference.

Of course, its important to note what kind of weather is causing the restrictions. If its a front moving through, you may be reasonably confident in the changing conditions. However, if its a solid low stratus layer resulting from an inversion or a stalled weather system, the changes may be less pronounced, slower or even nonexistent in your desired time frame. In which case, Plan C should be considered: Driving or becoming self-loading cargo.

At first glance all this may not seem nearly as useful to the VFR pilot as it is to the IFR pilot. The difference is in the severity of the weather and the degree of change you might be hoping to see. So, when VFR and the weather forecast for your ETA is marginal VMC, changing your departure time by a few hours earlier or later might make the difference and allow you to get there without any difficulty. However, if the weather is low IMC, dont expect miracles to result from an arrival time changed by just a few hours. Still, though, the weather can change rapidly, especially with frontal passage, so do take a closer look and you might be pleasantly surprised.

When VFR, its especially important to look at this in terms of the overall weather in the area and the trend at your particular airport. Simply put, you dont have the option of continuing when the weather is a bit down or if it didnt improve quite as much as you hoped. Thus, this adjustment of your planned ETA to maximize the chances of good weather is simply an extension of the normal flight planning and weather analysis you should already be doing. Just use the added dimension of time with a bit more assurance that if you modify your planned departure time enough, the weather at your destination will surely be better.

The trick, of course, is to determine the magnitude of “enough.” That is up to your own experience level, the nature of the weather, the prevailing weather patterns of the region and, of course, your own safety factors and tolerance level. In many cases of marginal weather making the personal go/no-go decision difficult, a difference of just a few hours can mean the decision is a comfortable “go,” or even in some cases a clear “no-go,” but at least the indecision is lifted.

When youre flying IFR youve got a lot more options. Thats why you got the rating in the first place, right? In thinking back on all your experience flying IFR, how many times have you actually flown an approach in actual IMC all the way to within, say, 100 feet or so of minimums? If you fly mostly ILS approaches, the answer is probably that you very infrequently fly all the way down. If you fly a lot of non-precision approaches, the answer might be that you fly to minimums somewhat more often. Either way, though, statistics and experience suggest that a few hours change in your arrival time can make a big difference in the conditions you encounter.

Like your VFR friends, you should still take a careful look at the general area weather patterns and the particular trend at your destination, but if youre willing to go at all and just hoping to maximize your likelihood of an easy approach, looking forward or backward just an hour or two may give you just what youre looking for.

Be Careful Out There

Our observations and suggestions here are not intended to replace your normal, thorough flight planning. Instead, we use the general idea that really marginal weather is unusual enough to suggest you begin to look at your weather planning with a view that the flight can often be completed if you can adjust your departure time. Obviously, VFR pilots need to be very careful with this but-statistically-the IFR pilot will not have to shoot that approach all the way to minimums. This general rule of thumb is not intended to replace sound go/no-go decision making based on proper flight planning.

Then, theres the whole we-tend-to-see-what-we-expect syndrome. While it is statistically true that weather for your approach isnt likely to be a problem, dont let it become your expectation so much that you lose sight of reality. Dont become so focused on the expectation of things working out nicely that you are not prepared for when they dont. Again, proper flight planning-and expectation setting-are critical.

The practical point of all this is that time can be your friend, and should be an important element in your flight planning. If you dont like the forecast for your ETA, expand your planned arrival time on either side and take another look. See whats happening in the general area and specifically at your destination. Take in the big picture and make a decision according to your own skills, experience and observations. You may just find that you dont feel like youre pushing marginal weather quite as far as you used to, or you may find that you actually get where youre going more consistently. Or, better yet, both.