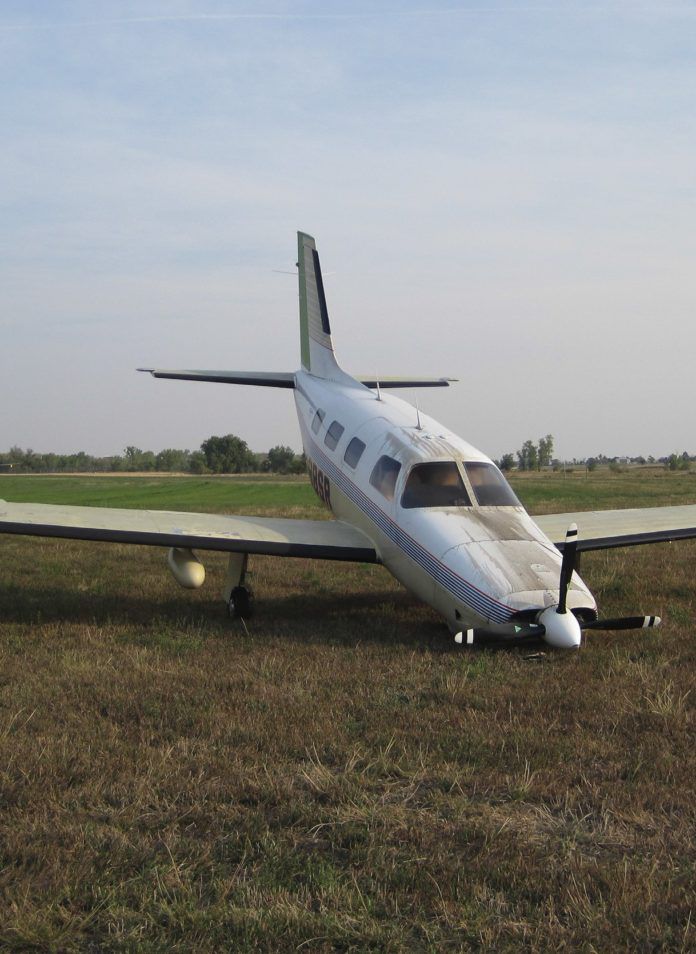 Altitude and airspeed, represented as potential energy (EPOT) and kinetic energy (EKIN), respectively, can be thought of as constituting an aircraft’s total energy. Why do we care? Appropriate energy management (EM), maintaining a safe total energy state for all phases of flight, can help avert in-flight loss of control (LOC-I), the unintended departure of an aircraft from controlled flight and the leading fatal-accident cause.

While the ACS states pilots should have EM knowledge, the FAA’s guidance—mainly the Airplane Flying Handbook (FAA-H-8083-3B) and Pilots Handbook of Aeronautical Knowledge (FAA-H-8083-25B)—includes incomplete discussions. To address this deficiency, let’s review basic EM concepts and how they apply to maintaining control following an in-flight engine failure.

Pilots with even a little bit of experience understand that an airplane’s total energy state when everything works is affected by at least two pilot-manipulated variables: power and total drag (i.e., induced and parasitic drag). Power adds energy to the airplane, while drag depletes it. For example, to climb, power is increased to add energy to the airplane, enabling it to increase EPOT/altitude and EKIN/airspeed. In another example, to descend at a slower airspeed, power is reduced to lessen energy input and flaps are lowered to increase parasitic drag and deplete total energy from the airplane.

With a failed engine in a single-engine airplane, power no longer is a pilot-manipulated variable. Drag can be controlled to help deplete EPOT at a safe and gradual rate while converting EPOT (altitude) to EKIN (airspeed) during the descent, approach and dead-stick landing. The priorities are to appropriately manage the airplane’s total energy all the way down to the ground and have just enough of both to perform an approach and landing.

Once the engine fails, our altitude (EPOT) is the only available source of maintaining the airspeed required for continued flight in a single-engine airplane. We must efficiently use this limited amount of energy. How?

The law of energy conservation applies. In his classic Stick and Rudder, Wolfgang Langewiesche teaches us that the elevator, thanks to its ability to change the airplane’s angle of attack (AoA), controls airspeed. With a failed engine, we regulate AoA to properly pitch the airplane to convert EPOT to EKIN at the appropriate rate, i.e., best glide airspeed (VG ), the speed at which drag is minimal, and the lift-to-drag ratio is at its greatest. Figure 1, below, graphically explains why we want to fly at VG.

Additionally, descending at airspeeds greater than VG unnecessarily limits the time aloft needed to identify a suitable landing site and safely maneuver the airplane for a soft/rough-field landing. Conversely, inappropriately increasing AoA results in descending at airspeeds less than VG , increasing induced drag and also depleting/wasting EPOT. Induced drag varies inversely with the square of airspeed, as shown below in Figure 1. The slower the airspeed, the greater the induced drag and the more energy is unnecessarily depleted. Figure 2, on page 18, graphically demonstrates why this is the case.

With a failed engine, the AoA presented in Graph A in Figure 2 represents an airplane flying at its best glide airspeed (VG ), where total drag (induced and parasitic) is minimal. Graph B in Figure 2, with an exaggerated but much higher AoA still lower than critical, represents the same airplane flying at less than VG . In this example, AoA is inappropriately increased, resulting in greater induced drag, which depletes limited potential energy (EPOT) at too rapidly a rate.

By pulling back on the stick/yoke, angle of attack (AoA) increases, inclining the resulting lift vector rearward. This rearward acting lift is induced drag, a retarding force. By increasing AoA more than necessary, as shown in Graph B, the resulting lift vector is inclined even more rearward, which increases energy-depleting induced drag and is associated with airspeeds less than VG.

With no engine restart, the pilot is committed to performing a dead-stick landing. For this emergency, three immediate action items should be applied in the following order and may be remembered by the words glide, grass and gas:

Glide: Immediately regulate AoA to achieve and maintain VG while descending. For example, VG for a Cessna 182T is 76 KIAS at maximum gross weight.

Grass: Pick out a suitable emergency landing area like a grassy pasture, for example, and head for it. (If you’re lucky enough to be within gliding distance of a runway, head for it.)

Gas: Attempt to restart the engine, i.e., switch fuel tanks; turn the auxiliary fuel pump “ON” if applicable; move the mixture control to “full rich;” ensure the fuel primer control is “in and locked” (if applicable); turn the alternate air source or carb heat control “ON” (as applicable); check magnetos (left, right and both). If no re-start, then squawk 7700 and announce the aircraft’s position and your intentions on Guard, 121.5 MHz.

With an operating engine, power is used appropriately to supply just enough energy throughout the level-off and flare to allow for a soft touchdown. With no power, the pilot must properly convert EPOT to EKIN during the descent and allow for sufficient EPOT at pattern altitude for conversion to EKIN for the dead-stick landing. Transitioning the airplane’s weight from the wings to the wheels as slowly as possible—while holding the nose wheel off the surface and in ground effect for as long as possible, are objectives for landing on soft or rough fields such as sand, soft wet sod, tall grass and mud.

As stated in the Airplane Flying Handbook, the pilot should try to fly a normal traffic pattern. Arriving at or above pattern altitude, pilots should use any combination of gliding maneuvers to arrive downwind at a key position from which the landing can be made. Once at the key position on the downwind leg, follow the recommended flap and gear extension procedures in the airplane’s POH. Because flap and landing gear deployment increase parasitic energy-depleting drag, and that EPOT is limited, lower flaps only when landing at the intended landing point is assured.

At the base-leg key position and on final, AoA is regulated on the base leg key position and final to maintain EKIN at VSO 1.4 and VSO 1.3, respectively, unless other airspeeds are stated in the POH. (VSO is the airplane’s stall speed in the landing configuration.) The pilot may also have to perform a forward slip—a high-drag, EPOT depletion maneuver—or move the touchdown site as needed to safely land the airplane. It is emphasized that pilots should always follow the recommendations as stated in the airplane’s POH for an emergency landing without engine power.

To increase the pilot’s and passengers’ chances of surviving the landing, it is important to touch down at the lowest controllable speed/EKIN when performing an off-airport, soft-field/rough-field landing. Groundspeed at touchdown is critical because doubling the groundspeed at the moment of touchdown means quadrupling the airplane’s total potential energy. Following touchdown, dispensable parts of the airplane’s structure, like the wings, rudder, horizontal stabilizer, for example, may be allowed to absorb energy by shearing off as the airplane contacts ground objects and vegetation while decelerating to a stop.

It is also important to maintain wind situational awareness and land into the wind. For example, an airplane that touches down at 60 KIAS and landing into a 10-knot headwind has lower groundspeed and approximately half the energy to be dissipated after contacting the ground than the same airplane landing with a 10-knot tailwind. Significantly less stopping distance on the ground is required by landing into a headwind compared to a landing with a tailwind; this may mitigate injuries and airplane damage.

Because the FAA, via its airman certification standards, requires pilots to have knowledge of energy management, certificated pilots during a flight review as well as student pilots should request training from their flight instructor in applying the basic EM concepts described in this article for the various types of landings specified in the ACS. With engine failure in a single-engine airplane, appropriate management of total energy increases the likelihood of safely flying to a dead-stick landing, especially one to an off-airport, emergency soft/rough field.

At the airplane’s best glide speed, VG, total drag is minimal and the lift-to-drag ratio is maximal (LDMAX). But LDMAX occurs at one specific AoA—any angle of attack lower or higher than that for LDMAX reduces the lift-to-drag ratio. The result—descending at airspeeds greater than VG —increases parasitic drag and wastes the limited EPOT available. This concept is presented graphically in Figure 2, on the following page.

Energy can be converted from one form to another but it cannot be created or destroyed. During this conversion, one form of energy decreases while another form increases until total energy is depleted.

Power: Regulated by the throttle; adds energy to the aircraft

Drag: Induced and parasitic drag deplete energy from the aircraft

Kinetic energy (EKIN): Associated with airspeed and motion; EKIN can be converted to EPOT

To maintain the desired coefficient of lift at lower airspeeds—VG , for example—AoA must be increased from that used in powered, level flight. This is depicted in Graph A, top. The greater AoA inclines the resulting lift vector rearward and represents the force opposing forward flight. This is induced drag.

A further reduction in airspeed to below VG as shown in Graph B requires greater AoA to maintain lift. The resulting lift vector is inclined even further aft in B than A, representing the greater induced drag at the higher AoA/reduced airspeed.

With engine failure in a complex and/or high-performance single-engine airplane, the windmilling propeller acts like a large, rotating speed brake, generating significant parasitic, energy-depleting drag that wastes precious EPOT and compromises glide performance. To decrease parasitic drag from a windmilling propeller and promote more efficient EM, the Pilots Operating Handbook (POH) for a Piper Arrow, for example, states the propeller lever (the blue knob) should be pulled back to the full decrease rpm setting. Doing so sets a higher pitch angle to the propeller blades, which acts to decrease rpm, reducing the parasitic drag penalty produced by the windmilling prop and promoting glide performance. Many times, you can feel the airplane accelerate on moving the prop control to the low rpm position in a power-off glide.

Michael J. Banner PhD is a flight instructor in Gainesville Fla., a courtesy professor at the University of Florida in Gainesville and check/instructor pilot for the Civil Air Patrol. A CFII and MEI, he has 6000 hours flight time and owns an American Champion Citabria.