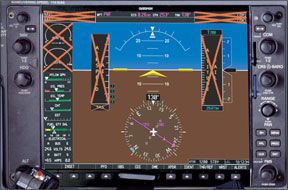 My story involving a glass-panel failure happened with an Avidyne unit. I was at Wick, Scotland, lining up for departure, and suddenly things started failing. First the lower Garmin 430, then the upper one. The transponder quickly followed and by then the PFD looked like a demo poster for what happens when things fail. The great news was that I was on the ground-even without a radio. It turned out the number one alternator

and the master control unit had failed. Whether one had

caused the other was incidental at that point.

In marginal weather, with no radio, only the most basic of flight instruments and no VOR or other electronic guidance? I surely wasnt taking off; being airborne and trying to land would have been harrowing. My handheld GPS had just become my new best friend; Ive double-checked its batteries ever since. Between it and my Sportys handheld nav/com (yes, I keep those batteries fresh, too), I would have had a shot at getting down in one piece. We might carry some backup radios and gadgets, but how prepared are we to deal with major system outages when in the clag? Short of the odd IPC or checkride, how often do we practice for-real panel failures? Why not use everyday flying to stay sharp on partial panel?

On a recent short hop from Tampa to Venice, Fla. (VNC), I had a real gyro-out experience that could have been quite bad. Instead, it worked out just the way we practice and reminded me once again that being prepared for what we know should never happen is the best way to survive such an event.

The weather was what I would call “good IFR”: stable clouds with a ceiling of about 1700 and tops at about 5000, no icing. It seemed ideal for some good practice approaches and just flying without lots of folks in the air. We had flown up to Tampa in the same stuff and were about halfway home when several things seemed to happen at once.

I had been cleared direct to the NDB at VNC and was tracking to it. There was a decent wind from the west and I had to cram in about five degrees to correct for it. But I seemed to be having trouble holding a heading and had made about five or six pretty hefty corrections. It just didnt seem right. Then, as I was looking at the mag compass, the controller asked ATCs equivalent of, “Where are you going?” I answered, “Venice?” As I noted the same indications from both my magnetic compass and my trusty handheld GPS, he asked, “Then why are you heading west?”

I told ATC I was apparently having some gyro problems and would like no-gyro vectors. The response was calming and instant. “Okay, make standard-rate turns and turn left. Stop turn. Turn left…stop turn. Okay, now we will line you up on the Sarasota localizer and you can land there.” That was followed by weather and a question on how comfortable I was with this idea.

It was all coming together and I was flying it as trained. Needle, ball, airspeed. It worked. As I began a descent and got down to about 1800, the ground and surroundings were visible and we were able to proceed safely to VNC below the clouds. My planned self-imposed training had turned into quite an interesting day of real-life practice.

The best part is that I reinforced not only confidence in my skills, but in ATC and the backup systems in the airplane. They both worked and worked well. For those who rarely have a positive comment about ATC, this was a classic example of why we pay them and how truly valuable they are.

The last time I actually flew partial panel had been over 25 years ago. But I had practiced it a few times and, for whatever reason, I had made it part of my self-testing when working on instrument approaches with a safety pilot. That paid off in the comfort I had in executing the concept in reality that cloudy day in Florida.

Those lucky souls flying behind a glass panel generally have at least a “real” artificial horizon and directional gyro elsewhere in the panel on which they can fall back. Many “steam gauge” panels today also have backups, an electric-powered horizon as an example, for when vacuum- or air-powered dials soil the bed. And there are any number of other options, including the electronic “virtual” panels available in Garmin x96 portable GPS navigators. And we all have our backup gadgets powered up and ready to use each time we lose something in the primary panel, right?

If not, then youll need to draw from some well of experience, luck or technology-perhaps all three. On the other hand, if youve been following along as your instruments instrumented and your gauges gauged, youd be more than a little bit ahead of the game, instead of woefully behind the airplane.

Consider, for example, the lowly turn-rate and -quality instrument, either the more-modern turn coordinator or the turn-and-bank indicator. Both instruments display the rate and quality of our turns, with a thick white needle or an airplane symbol and a ball sliding around in an inclinometer. Using either instrument, we can determine if the turn were in is of standard rate and whether its coordinated.

But most of us zoom around on autopilot these days. We all check them as part of the checklist on the way out to fly in IMC or practice approaches, but how recently have we actually flown around, held an altitude and tracked a course or flown a radar approach using those things? And how can you practice partial panel when that attitude indicator is right in front of you?

One way is obvious: cover the attitude indicator and directional gyro with one of those stick-ons most pilot shops sell (for practicing partial failures in a glass-panel airplane, stick-on covers also are available). You can also use a business card, a sheet from an adhesive note pad or a ripped-up sectional. The point is to fail an instrument system and these two gyros are a great place to start (you may want to fail the pitot-static instruments later). At first, of course, wed strongly suggest covering up a perfectly good instrument only on a good-weather day and/or when an experienced safety pilot is riding shotgun.

The other way is not so obvious. Instead, dont cover them at all, but rather take careful note of where the needles are on your plane in a standard or half-standard-rate turn when everything is working. The same is true for what happens with the mag compass (remember all those rules of thumb on that pilot test way back when?) and the ball as one initiates turns. With that reference information as a basis, you may be ready to try the real thing, or something close to it.

The simple concept is to keep the turn needle centered, the ball centered and the

without looking at the attitude indicator or the directional gyro. This is instrument flying 101: If the airspeed increases, one is likely descending, and if it slows it implies a climb. Turns are accomplished at standard or half-standard rates depending on the level of precision and your mutual confidence levels. Smooth, delicate control changes and power changes are the rule.

This is truly an area where “smaller is better” and fine tuning is where one starts as well as ends. Do not try to make major adjustments in any area with this concept of flying. Simply continue to make a small adjustment, give it 10 or 15 long seconds to stabilize and then make the next one. For example, I prefer to use power rather than trim as a means of controlling climb or descent.

Check the vertical speed indicator-is that the glide slope or descent rate you wanted? If not, more power will decrease it and less will accelerate it. Then if you wish to slow down, trim a notch nose up and see what happens after that 10- to 15-second wait. Not slow enough? Give it another notch down. Too fast? A less than one click up or maybe a touch or bump on the trim wheel instead of the switch.

Remember that concept your first double-I taught you about listening to the plane? Thats one of the keys and, really, is what were trying to establish here (or, hopefully, re-establish). For example, if engine/propeller noise is getting louder, one may well be accelerating and/or descending. Quieter could be a climb as the engine is loaded up and slows. The tach should show you as well, but if it is not working.

Steep turns are a challenge in instrument flying, and I have had more than one instructor note they can tell a great deal about an instrument pilots skill by how well they are executed. When I was teaching, I found that to be true and had my students demonstrate them on a regular basis. Standard and half-standard-rate turns seem quite simple and easy by comparison since the lift vector is not very far off vertical.

Does partial panel practice have value? Absolutely. One, it is the last backup in a real emergency with a failed vacuum system in the soup. Two, anything that hones ones skill at precise flying is good for safety and longevity. And three, it is a great challenge that can actually be fun to practice when two pilots want to test each others skills at something besides landing. Keeping the plane level and on course using only the airspeed, needle, ball and mag compass is hard work. Do it for three or four minutes and you will get a real workout, and yet find that you are getting better at it. Then add in a 180 degree timed turn-try the half-standard-rate first-and it will get interesting. Just maintain that bank via the turn needle, keep the ball centered and the airspeed constant and the VSI at zero and-oops! Things all happen faster and they seem more sensitive to pilot input.

Those of us who get to fly the Garmin G1000 or the Avidyne systems have seen how they are making all of us better and safer, and they make instrument flying easier and are very reliable in general. But “things happen,” and when they do it is comforting to know that one is equipped mentally and physically to deal with the situation. Those of us who fly the legacy systems already know that they have limits and failure rates, and both of those systems require the presence of backup instrumentation. Partial panel is a real challenge and can be a fun experience to practice. When it is needed, it can save your life if you can execute it well. That ability is gained the same way as all the others: practice, practice, practice.

Bill Straw is a 4000-hour commercial instrument-rated pilot who flies a 1971 Turbo Skymaster.