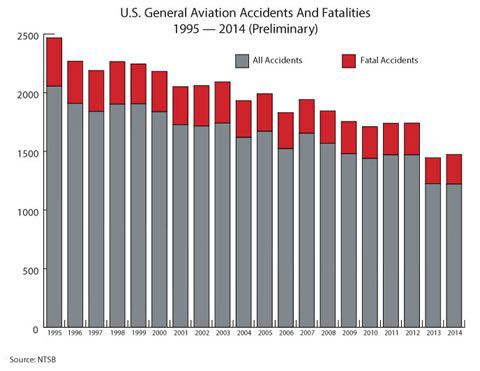 The NTSB in early August released preliminary general aviation accident statistics for 2014. Sadly, and despite major efforts at the FAA and within industry to enhance safety, the NTSB’s preliminary 2014 data show an increase in fatal general aviation accidents, from 222 in 2013 to 253 in 2014. Our calculator says that’s a 13.9 percent increase in fatal accidents between 2013 and 2014.

On July 11, 2015, Board Member Earl F. Weener, Ph.D., previewed the preliminary 2014 numbers in a presentation to a Flight Instruction Safety Seminar held at the NTSB’s Training Center in Ashburn, Va. In that presentation, he reminded seminar attendees the NTSB has investigated approximately 1500 GA accidents per year over the last decade.

Operating a transponder is pretty simple: Put in the correct code, make sure it’s turned on. Turn it to the “Alt” position to report the aircraft’s altitude if so equipped, and turn it to “Standby” once clearing the runway at your destination. At least that’s the way it used to be. Now the FAA wants us to leave transponders on and in altitude-reporting mode any time we’re in a movement area at a towered airport.

To ensure the systems don’t miss any surface traffic, aircraft transponders and/or related equipment, like ADS-B, needs to be operating. “Nationwide, airports with ASDE-X report an average of twenty non-compliance transponder events per day, even with airport diagram or Automated Terminal Information Service (ATIS), or both, verbiage directing pilots to operate with transponders on,” the FAA’s SAFO (15006) stated. “To proactively address these problems, aircraft operating on all airport movement areas at all airports, not just those that are ASDE-X equipped, must have their transponders on in the altitude reporting mode.”

As a reminder, the FAA defines a “movement area” in FAR 139.5 as “the runways, taxiways, and other areas of an airport that are used for taxiing, takeoff, and landing of aircraft, exclusive of loading ramps and aircraft parking areas.” Another reminder: At towered airports in the U.S., an ATC clearance is required to enter a movement area.

A project involving demonstration and evaluation of a remote ATC tower system is going live this summer at the Leesburg (Va.) Executive Airport, KJYO. The new system is a partnership between the manufacturer, Saab Sensis Corp., and Virginia SATSLab, a Virginia-based non-profit. The FAA and the Virginia Department of Aviation also are participating. The airport presently is non-towered.

“Pilots will receive non-radar tower services from a trained FAA-certified controller, ensuring safe and efficient operations during the demonstration,” said Dennis B. Boykin IV, Chairman of the Leesburg Executive Airport Commission, in a press release. Published reports indicate the service will be advisory only.

The system consists of high definition video cameras, pan-tilt-zoom camera, signal light gun and microphones feeding their data to a remote tower center (RTC) located at the airport. The RTC is to be equipped with multiple high-definition displays and two controller positions. A mobile ATC tower also will be deployed, “for safety redundancy and data comparison,” the release said. Saab says it is the world leader in remote towers. In addition to Virginia, it’s working on remote tower projects in Sweden, plus Australia and Norway.

Lockheed Martin’s Flight Service Web site, www.1800wxbrief.com, is offering a new product to help alert pilots to areas where unmanned aircraft systems (UAS) may be in operation. The service is a product of LockMart’s UAS traffic management (UTM) system, now available to the UAS community. A UAS operator optionally reports their operating areas, which are then plotted per the map below. Pilots may access the mapping and related information on the Web site.

Additional capabilities may include allowing UAS ground control stations and other compatible platforms to interact directly with Lockheed Martin’s UTM system; monitoring of UAS to determine if they remain in their intended operating area; and notification of air traffic control when UAS encroach on controlled airspace. The company also is developing support of beyond-line-of-sight UAS operations through ground-based detect and avoid capabilities.