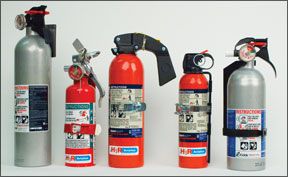 An in-flight fire is most pilots greatest fear, surpassing even a mid-air collision. Although relatively rare, the unique combination of combustible materials and ignition sources available in the typical personal airplane means an in-flight fire must be dealt with quickly and decisively. Doing so usually means disabling systems to deprive the fire of its fuel or ignition sources, and employing a fire extinguisher

to smother it. A quick landing, even if off-airport, may be necessary.

The problem? Our cockpits feature an abundance of materials capable of sustaining a fire. Carpeting, insulation, upholstery and paper charts are present in even the most basic airplane. This is true even if every scrap of fabric has passed an FAA-approved burn test. Throw in a fuel line or two-whether routed through the fuel selector, flowing via a capillary line to a fuel pressure gauge, or resulting from the designers basic need to move fuel from the tanks to an engine-and youve got another, much more combustible material.

There are lots of extinguishers on the market, products both designed for aviation use and those marketed as “all-purpose” units. Recently, sister publication Aviation Consumer gathered up current examples of aviation-specific and all-purpose extinguishers, lit a few fires and evaluated the results. We learned that combining even burn-tested fabric with some 100LL and the air flowing around-and through-an airborne airplane creates a significant problem. We were surprised at how quickly we used up extinguishing agent and by the premium we pay for an extinguisher appropriate for the cockpit. We also quickly discovered the real differences between household, automotive and aviation-grade extinguishers.

There are two basic portable fire extinguisher types on the market these days: Halon and dry chemical. Of the two, dry chemical types are less expensive and far easier to find: We snagged two Kidde-brand units from our local Wal-Mart for under $60. One was a typical residential unit, rated for use on wood/paper (type A), flammable liquids (type B) and electrical (type C) fires (see the sidebar on page 22 for an explanation of the different ratings). The other one was marketed for automobile use and rated for type B and C fires.

We also obtained three Halon extinguishers from H3R Aviation, which manufactures a wide range of aviation-specific extinguisher products, including portable units and those large, wheeled bottles you might find on your FBOs ramp. Two of our H3R units use blended Halon, a combination of Halon 1211 and 1301; the third uses Halon 1211. According to the company, Halon 1211 is a liquid streaming agent while 1301 a gaseous flooding agent. Because of Halons ability to react with a fire, it stops the ongoing chemical reaction without producing potentially damaging (i.e., corrosive) residues.

Halon, of course, is a chlorofluorocarbon banned in the U.S. and most other countries since January 1, 1994, as part of the Montreal Protocol on ozone depleting substances. Before it was banned, enough of the stuff had already been produced that new extinguishers can be sold and, as in-service units reach their life limits, their Halon can be recycled. As a result, its likely fire extinguishers containing Halon will be around for some time.

One of the issues associated with Halon use, especially in the tight confines of a cockpit, is ventilation. According to FAA Advisory Circular AC 120-80, In-Flight Fires, “NTSB investigations of in-flight fires indicate that crewmembers have been hesitant to use Halon extinguishers during flight because of mistaken ideas about adverse effects of Halon.” Instead, the FAA notes, “The toxic effects of a typical aircraft seat fire, for example, far outweigh the potential toxic effects of discharging a Halon fire extinguisher.”

Hopefully, discharging any extinguisher in a cockpit puts out the fire. But, discharging some extinguishers can create a whole new set of problems. Again, the FAA (from AC 20-42C, Hand Held Fire Extinguishers For Use in Aircraft): “Dry chemical extinguishing agents when discharged in crew compartments of confined areas may cause serious impairment to visibility. In addition, they may cause temporary breathing difficulty during and immediately after discharge.” Our testing confirms these two cautions.

According to the National Fire Protection Association and quoted by H3R Aviation, “Any chemical powder can produce some degree of corrosion or other damage, but monoammonium phosphate is acidic and corrodes more readily than other dry chemicals….”

Despite NTSB and FAA statements indicating Halon extinguishers are preferable to dry chemical units, the FAA is careful to note “human exposure to high levels of Halon vapors may result in dizziness, impaired coordination, and reduced mental sharpness.” Further, decomposed Halon by-products-those created when the compound is exposed to a fire-are more toxic than the Halon itself. The FAAs punchline: “[D]ecomposition products from the fire itself, especially carbon monoxide, smoke, heat, and oxygen depletion, create a greater hazard than the thermal decomposition products of Halon.”

To see for ourselves how the two types stacked up, we started a fire. Not just any fire, though. Since we couldnt find anyone willing to donate their airplane for testing-whether airborne or not-we needed a Plan B. Instead of a real airplane, we obtained some burn-tested synthetic (i.e., not leather) upholstery material left over from an interior refurbishment project. We used some scrap lumber and plywood to fashion a frame, stapling the upholstery to both sides, then moved the whole rig outdoors. Being too cheap to drain any precious 100LL, we sprinkled-sparingly at first-some unleaded gasoline on the contraption, let it soak in for a few moments and grabbed the nearest Halon extinguisher. At the flick of a Bic, we were in business. We waited a couple of seconds for the flames to spread evenly along the frame, then pulled the extinguishers trigger.

Its not an exaggeration to say the effect was immediate and satisfying: The flames were out-period-and we were contemplating a slightly darkened wooden frame and very charred upholstery remnant. (In fact, pay no attention whatsoever to whether the fabrics in your aircraft passed the FAA burn test: If theres any gasoline involved, they will burn. Enthusiastically.)

We turned the rig around, exposing the other one, and dumped more gasoline on it. Maybe too much. We readied a dry chemical extinguisher by pulling its safety pin, flicked our Bic again and stood back. This time, we had a fire. Putting it out required a few more bursts from the dry-chemical extinguisher than with a Halon unit. But it did go out.

We also had a large cloud of powder, which covered everything nearby: the test rig and its upholstery, spare extinguishers, grass, pavement and an editor. The cloud was so large, in fact, we decided right then we didnt want to discharge a dry-chemical extinguisher in our airplane unless it was the only thing we had. Put aside the long-term corrosion dangers to the aircraft resulting from the cloud of powder: We genuinely would have been IFR in the cockpit, unable to see the panel clearly. In our view, thats going to be an unnecessary distraction in the immediate aftermath of fighting a cockpit fire. Too, we wouldnt want to breathe that stuff-opening a window or donning a smoke hood would have been mandatory at altitude.

No way, no how are we going aloft without a fire extinguisher (our airplane has a small, rechargeable Halon unit mounted on the floor behind and easily accessed from the pilots seat). A dry-chemical unit, while inexpensive, easy to find and effective, leaves too much to be desired. Among the issues strongly arguing in favor of a Halon extinguisher, in our opinion, are potential corrosion along with the respiratory and vision-limiting effects a dry-chemical extinguisher produces.

As for which brand to get or where to buy it, our research among the usual suspects of general aviation vendors reveals they all stocked some combination of the same units marketed by H3R Aviation. Theres no FAA fire-extinguisher approval process relevant to Part 91 operators; the important thing is making sure an appropriate one is available when you need it. No doubt other manufacturers produce portable Halon units sized to work well in cockpits, but dont market them to GA.

Solid maintenance by well-trained technicians, enforcing a no-smoking policy, replacing worn or dated wiring and avoiding too many portable devices-along with their power cords-will help minimize the likelihood of an in-flight fire. On the really bad day you have one, however, youll want to reach for a Halon extinguisher while aiming for the nearest runway.