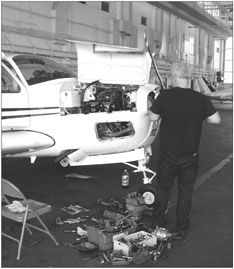 We pulled your airplane out of the hangar, the mechanic says on the phone. Everythings ready; come pick it up.

Your airplanes been in the shop over the last few days for maintenance.The annual inspections complete and a few modifications were made-maybe you had it painted, or installed an upgrade. Perhaps a major repair is now finished. Whether the airplane was down for something as simple as an oil change or as intrusive as an engine swap, the accident record attests that its wise to thoroughly check it out before flying away from the shop.

One example occurred on July 1, 2002, when a Cessna 172E collided with a tree on the landing rollout at Cedars North Airport (W58) in Battle Ground, Wash. The solo Commercial pilot was not injured but the aircraft received substantial damage to its right wing and lift strut. The flight departed from the Grove Airport in Camas, Wash., approximately 15 minutes prior to the accident.

According to the pilot, the aircraft lost oil pressure shortly after takeoff. A post-accident engine run and wreckage examination revealed the aircrafts engine developed an extensive oil leak during the accident flight.The leak originated where the oil temperature bulb attaches to the oil screen assembly. The operator reported that the oil temperature bulb appeared to have been improperly installed during the oil change occurring approximately 15 minutes before the accident flight. The NTSB determined the probable cause to be, Improper maintenance procedures by maintenance personnel, which resulted in an engine oil leak while in flight.

Thankfully that episode is the exception, not the rule. Most mechanics and installers are professionals-theres no disputing that. Like pilots, though, they are also people-and subject to the same human factors as are pilots.Even the finest mechanics can sometimes make mistakes. As the pilot, you have a vital part in the team effort of returning the airplane to service. The mechanics reputation and livelihood depends on his or her good work, but remember: Its your life, and those of your passengers, on the line.

As a part of the team, its your job to perform a thorough post-maintenance inspection whenever the mechanic is finished with the airplane.

Mother Of All Inspections
If the paperwork checks out (see the sidebar on the opposite page), spend some time on a very thorough airworthiness check. Budget at least half an hour-an hour or more is better, especially for more complex airplanes-to investigate everything that could be wrong after any work more complicated that a simple oil change. And what could possibly go wrong? The quick answer is everything, so youll be checking everything, right?

Anyone whos every spent any time at an aircraft maintenance facility knows well that stuff happens-stuff well beyond and outside the scope of the work actually being accomplished. An aircraft in for an oil change can suffer hangar rash; one in for a tire change can fall off the jacks. Tools get dropped or left behind, and shop rags can find themselves in the wrong places. In other words, this should be treated as the mother of all pre-flight inspections, because thats really what it is.

One place to start, of course, is with the work the shop actually performed. If the work is as simple as an oil change, the place to start is under the cowl-is the drain plug in place? How about the oil filter? Is the appropriate safety wire in place? How about the dipstick-does it show the appropriate amount of oil is back in the sump? Is the filler cap secured? How about the cowling? Some aircraft are so tightly cowled that removing large portions of the cowling makes the oil change go faster. But steps can be skipped when replacing the cowling and-last time we checked, anyway-losing the cowling while airborne counted as something wed want to avoid.

Moving beyond simple oil changes and beyond even the work the shop performed, or was supposed to perform, the sidebar on the following page provides a good checklist for things youll want to inspect after all the paperwork is completed and youre ready to fly. In any event, youll want to go beyond the usual items on your preflight inspection checklist.

Some things, of course, transcend a good checklist and only a pilot or owner who is intimately familiar with the airplane would know to check them.For example, late-model Bonanzas with a one-piece cover for the aft side of the front spar have been reassembled so that access to the emergency landing gear extension handcrank is impossible.

Other things youll want to check are not aircraft-specific, but nonetheless go beyond even an extensive exterior preflight. Like making certain seats and seat belts are properly installed and fully adjustable. Or ensuring all equipment like fire extinguishers and oxygen bottles are in place and accessible

Other stuff youll want to check includes ensuring headsets, checklists, charts, flashlights, etc., are where theyre supposed to be. The best thing to do with these items is to have removed them from the airplane before it went into the shop to avoid the chance equipment will be misplaced or lost-and to help the mechanic keep his/her shop less cluttered with piles of your things during work. Putting it all back where you want it as youre getting ready for your test flight ensures its present and in the proper location.

Flight Test
At this point youve been inspecting your airplane for perhaps most of the day-and you havent even started the engine(s). Now its finally time for perhaps the most important part of accepting an airplane from the shop: the post-maintenance test flight, a short hop to make sure everything still works the way it should. See the example checklist in the sidebar at left to make sure you cover everything on your test flight.

If the work involved the engine or systems ahead of the firewall, start the engine, noting normal engine indications, and immediately shut it down to conduct a leak check. Keep this ground-run time short, especially if a cylinder had just been replaced, or if the entire engine is new or overhauled. It wont take long for leaks to become obvious, so start it up, check the gauges, and shut it down. Open the cowling(s) and look for oil or fuel.

Once your airplane passes the leak check (or if you choose not to perform one), take off and climb to a safe altitude. Remain in day, visual conditions. Heres an idea: Bring a safety pilot with you to look for traffic while your eyes are in the cockpit checking systems. In fact, if you can bring the shop supervisor or the mechanic that did the work on your airplane, do so-he or she may be able to help diagnose those minor squawks that often crop up after a planes been opened up.

Stay clear of the airport traffic pattern, but close enough to make it back if you lose power-flying the rectangular traffic pattern a thousand feet or more above pattern altitude is a good tactic. Check control feel, engine operation and the use of all systems and avionics just as you had on the ground. What you want to do here is run through everything you can on this initial test flight to confirm there will not be any surprises on an extended flight.

Finish your short test flight by landing, taxiing back to the shop, and then completing another detailed inspection of the airplane. Bring any discrepancies to your mechanics attention right away, and get them fixed (and re-tested) before accepting the airplane.

Take Your Time
It takes time, and not a little patience on your part, to properly accept an airplane from the shop. Plan at least half a day, assuming all the paperworks perfect and no squawks show up during inspection and test flying.If weather conditions are sketchy or sundown approaches, put off your flight until the next day. Trust me-Ive had total electrical failure in night, IMC in a Baron during a flight home from annual inspection, because I was impatient and didnt perform a day/VMC test flight before leaving the shop.The time it takes to doublecheck the work under controlled conditions is more than worth the stress and danger of impatience.

Most mechanics are highly skilled professionals. But like pilots, mechanics are people too, and subject to the same sorts of human-factors errors as we who fly the airplanes. Its a team effort to return an airplane to service, whether the job was as big as an engine swap or as small as an oil change. Take the time to review the paperwork, check the airplane thoroughly on the ground, and to conduct a short test flight every time you pick up an airplane from the shop. Your life may well depend upon it.