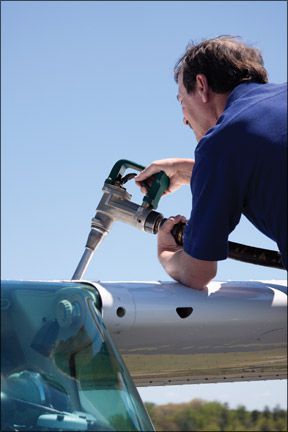 Few in-flight emotions evoke more sweat and discomfort than when youre unexpectedly low on go-juice and arent sure your remaining fuel is enough to keep the engine spinning until touchdown. If ever youve experienced the accompanying emotional swing, you already know that they stay with you. First comes disbelief-“I cant be that short….” Next comes the quiet surge of adrenaline-juiced anxiety between asking

yourself the useless rhetorical question-“How did this happen?”-and when you turn to a useful one: “What do I do to survive this?”

For the lucky, the final wave of emotions comes after the airplane is on the ground intact, on a real runway with the engine running…if, that is, youre really living well. The next conscious thought is, “Never again.” A number of pilots of my acquaintance found themselves in such straits-and, counter-intuitively, not usually attempting to stretch too little fuel into too-long a distance. Generally, the situation arose because of a judgment error or operating mistake innocently made long before realizing they were in a full-blown bingo-fuel emergency.

My friends have had too much company.

Seven years ago, fuel-starvation accidents occurred at a rate of more than three a week, according to the AOPA Air Safety Foundation (ASF). Through the foundations efforts with the FAA and others, that rate dropped by about half in 2008. In the interest of full disclosure, that 2008 number occurred in a year which saw flying decline about 20 percent, which brought with it an overall drop in accidents. So viewing the lower stats for fuel-starvation accidents as proof of a smarter pilot population may be unwise. Especially since, even at the lower-basis numbers we still suffered an average of 1.5 fuel-management accidents per week.

The fatalities seem particularly sobering when you realize that post-crash fires seldom play a role in a dry-tanks accident. But the biggest get-the-heck-out-of-Dodge aspect of these numbers stems from their totally avoidable nature.

Pilots spend a lot of time focused on hourly fuel consumption and true airspeeds, but do we spend enough time translating the right set of numbers to survival information? Do we really know what our reserves are? And do we think in terms of a maximum range or the more-useful time in-flight? When it comes to practical planning practices, do you employ numbers that truly allow for operationally practically fuel reserves-as opposed to FAR-legal requirements?

Maybe you dont think much about it because you seldom fly max-range flights. Well, thats not really a useful approach to allowing for when things go awry on a flight inside your normal operating radius. By far the bottom line for avoiding fuel-management accidents is to know thy plane.

Knowing the exact capacity of your tanks-all of em, individually-always seemed like a basic item along with knowing how to use the power-and-fuel charts for your airplane. During the first 100 hours of new-to-me airplane ownership, it was my practice to run the tanks dry to determine actual usable capacity and to calculate time limits at different power settings. The numbers were generated using a stop watch, density-altitude standards and running each tank dry-with the other tank mostly or nearly full. The later addition of a GPS-enabled fuel totalizer confirmed those numbers.

Around this information I built my own personal fuel-management practices and personal minima. My preference is for 90 minutes at IFR destinations where any required alternate is within 100 miles-two hours if an alternate is farther. And for VFR, 60 minutes. All are based on cruise-power fuel flow.

For the 180-hp Comanche I last owned, the numbers worked out to 10 gallons for VFR, then 15 or 20 gallons for IFR, depending on the alternate. But having good numbers and personal minima are no guarantees that a fuel-critical event will never happen.

The trip spanned about 595 nautical between two airports; on an IFR flight plan filed for 11,000, GPS direct-barring any ATC-imposed changes, an unlikely event at that altitude.

Experience and flight-plan data showed the trip coming in at 3 hours, 50 minutes and 42 gallons-leaving 1.8 hours in reserve at the 10 gph cruise-consumption rate.

Conditions required selecting an alternate and the closest legal choice was 150 nm beyond my destination. The fuel required was 42 gallons to the first intended landing point; the first legal alternate would require another eight gallons, leaving 10. 7.5 gallons would be required to fly another 45 minutes to the alternate. That left me legal by 2.5 gallons-but thats not enough for a go-around, or Plan C. Instead, we opted to file instead for an airport 200 miles short of the desired destination-one also under IFR, but with a legal alternate only 50 miles away.

As luck, micrometeorology and an unexpected tailwind worked out, I found myself “fatter” in fuel than expected when it was time to start down for the fuel stop. I made that planned stop anyway, figuring that if weather en route varied from the forecast, so might weather at the ultimate destination. In the end, I completed the trip as planned, including the fuel stop, and had plenty of gas at both ends.

What options do we have when a tank unexpectedly goes dry-and we know less than wed like about whats remaining in the other? The overriding first step is to make a new decision; resist the urge to replay and recalculate in hopes the numbers will change. They rarely do and youre succeeding only in reducing the time available to act. So make a new decision-quickly. Then act on it with one or more of these options:

Turn: Maybe a few degrees; maybe 180. But when its clear your intended destination falls outside your fuel supply, pick a new, achievable one. Do not keep cruising toward that now-unrealistic destination debating a solution and hoping for the best.

Slow down: Reduce power and you stretch both your time aloft and how far you can go on remaining fuel. As a general rule cited to me by a couple of CFIs over the years, a 20-percent reduction in power can result in a 12- to 15-percent increase in range-and a 20-percent increase in time remaining. Of course your mileage, as they say, will vary, mainly based upon the power settings already established and how aerodynamically “clean” your airplane is.

Lean til it squeaks: The only way to get book fuel burn is to lean the mixture as the manufacturer specifies. While basic instrumentation-a tachometer with a fixed-pitch prop or a single-needle exhaust gas temperature (EGT) gauge-will get you close, the only sure way to perfect your leaning and know your fuel flow is by using a multi-probe engine monitor and/or a fuel totalizer.

Many pilots of fuel-injected aircraft sporting balanced injectors are familiar with the practice of running their engines at a lean of peak (LOP) EGT setting. As a rule, running LOP saves gas and results in a cooler engine. The only real trade-off is a slight airspeed reduction.

Even without a balanced injection system allowing routine LOP operations, some airplanes allow their pilots to squeeze down fuel flow a little to the lean side of peak by adding a bit of carb heat before roughness sets in. Aggravating as it may seem, living with a little roughness can save enough fuel to get you home.

Stay high: Stay at altitude as long as possible; higher altitudes usually reduce fuel-burn-particularly when youve leaned appropriately. And remember: Coming down is guaranteed-just mind your redline if you find yourself facing a slam-dunk descent to the airport youd normally have descended to much earlier.

Power back for descent: Easing off the power to get a shallow descent rate can ease your fuel use more, even as you add some nose-down trim to expedite your descent. And leave the mixture knob alone-absent a need for added power, that is.

Landing leaned and at reduced power wont generally hurt the engine; running rich when low on fuel can leave you looking at the runway end as you descend into a field short of the threshold. The only trick is remembering to enrichen the mixture on the go-around, if there is one.

A couple of other points: Do nothing to dirty up the aircraft until the runway is made-and not a second sooner. That means no flaps and leaving the gear stowed until the threshold marks pass beneath. Conversely, dont allow your joy at arriving turn fortunate success into an alternate failure mode by forgetting the gear.

There are a lot of tools in even the most basic airplane to help you through a minimum-fuel situation. However you do it, youve got to start with accurate knowledge of how much fuel you started with and how much youve used. Then slow down, to maximize the fuel and time you have left.