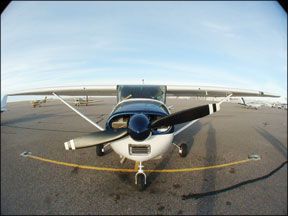 Insurance companies have pilot checkout provisions for a reason-the first hours in a new aircraft are higher-risk than routine operations. The week I made an offer on my very first airplane, a pilot crashed and died on his way home in his newly purchased Piper Comanche. I obviously wanted a different outcome for my trip to pick up a new plane.

The next week, my co-owner Roger and I would be bringing our newly purchased 1960 Cessna 182-N225M-home to Idaho Falls, Idaho. Unfortunately, our new

plane was located in Glenwood Springs, Colo. Picking it up would require a long VFR cross-country flight across the Continental Divide in the middle of winter. We also wanted to make the trip on a weekend, preferably in a single day at a time of year when the days are notoriously short and the weather consistently bad. Our plan was beginning to sound like the opening narrative of an NTSB accident report. Flying a newly purchased plane on a long cross-country trip is a non-routine, high-risk mission. Why? There are numerous factors that can line up the wrong way to complete the chain of events that lead to an accident. These risk factors include:

Novelty of the situation; and,

All of these-and more-can combine to wreak havoc on your well-laid plans. Or much, much worse.

Challenge OF the Unfamiliar

As renter with only 350 hours total time, getting to know different planes and gaining my complex and high-performance endorsements improved my skills as a pilot. Still, I always found myself booking the same plane for a reason-familiarity is comfortable. A major justification for owning versus renting an aircraft (so I told my wife…) is the safety benefit from getting to know one plane well. How it sounds, how it feels, where systems and gauges are located, how it climbs on a hot day, etc. In this scenario, familiarity is synonymous with safety.

The first trip in a new aircraft, however, is the antithesis of safe. A new plane is an alien world of new switches, buttons, knobs, control pressures, sight pictures and performance numbers. If something goes awry, chances are you wont immediately know where to find the right button or switch. If you need to trim to the maximum glide, or best climb speed, the number and sight picture probably wont be very familiar.

Roger and I only had roughly 20 hours each in a 1973 182 available for rent at the local FBO. But during our plane shopping, we learned about the variety of differences between model years. Pete Nelson of Middle Fork Aviation in Challis, Idaho, taught me a lot during an earlier pre-buy inspection of a 1962 model 182E we looked at while shopping. During a test flight in the 182E, Pete pointed out the flap switch.

Imagine adding power for a go-round, reaching over and hitting the flap switch once and thinking the flaps are coming up. In reality, you just bumped a momentary switch, one requiring you to hold it in the up position to retract the flaps. You still have full flaps. Its an easy mistake. Full power on a go-around is great. Full flaps still in when you thought you dumped them? Not so much.

Hangar flying among people familiar with the plane you are acquiring is a great way to augment your own experience. Other pilots offered great advice like “Know your V-speeds” or “Youd better review the emergency procedures.” These are obvious weaknesses for a pilot in an unfamiliar aircraft and unfamiliar cockpit. Sure, you can see where critical systems are in the POH, but reaching for the POH is not the same as reaching for the right switch when you really, really need it. It is critical to be aware of how the new aircraft differs from the plane you are most familiar with both in system locations and performance numbers (e.g., airspeed reads in mph vs. knots).

Fear of the Fresh

One factor that made N225M such an attractive plane to us was the freshly rebuilt engine and prop, new paint, redone interior and newly installed avionics-even new gas tanks and gas caps. Unfortunately, of course, new systems can fail during their first few uses.

Planes that are changing owners typically have had recent mechanical work and fresh annuals. It behooves the new pilot-owner to know what systems were worked on most recently. For our particular plane, nearly every system was new, but the last step before our maiden flight involved draining the break-in mineral oil and putting in a fresh batch of straight-weight oil. I was thrilled to be the first one to put time on that new oil. Also, I was keenly aware I was about to fly a plane that just had its oil changed.

Before getting in any plane, it is a good idea to know what mechanical work was done most recently, and note the systems that might be affected. Know, also, that unrelated systems may have been impacted in imaginative ways. If there was avionics work done, be extra diligent checking the radios. A new alternator-check the belt tension and ammeter during run-up. Have a questioning attitude and heightened awareness of systems that were most recently worked on. Review your emergency procedures and numbers one more time just in case. Use the complete pre-flight, walk-around and before-takeoff checklists-dont just do a run-up before taking the active.

When planning any trip, its a good idea to ask yourself which aspects of it are routine and which are novel. This trip had quite a few novel factors. First, it was winter (cold air temps, crappy weather, short days). Second, we would be flying an unfamiliar route over the Continental Divide and mountainous terrain, with very few airstrips along our route (even fewer with services). Our round trip would be 660 nm, which would be an ambitious day in summer daylight and weather. To be reasonable, we would want to be headed back home no later than 2:00 pm.

The plane we were picking up had a brand-new Garmin 430 with a pigtail wired for a Garmin 396. Way cool for us as new owners, except neither of us was familiar with the setup other than drooling while plane shopping. Before the trip, we downloaded the manuals for operating the GNS430, studying them as time allowed.

The cool new GPS and radios were perhaps the biggest reasons we chose to have two pilots in our new plane for its maiden trip home. We decided one person on the GPS and radios would keep the PIC on the task of flying the new plane. As a backup to the cool new systems, we packed an old-fashioned set of sectional charts marked with courses and checkpoint marks for dead reckoning. To reduce our risk, we chose to not add formation flight to our experience, but we stayed within a few miles of each other in both visual and radio contact on the standard 122.75 MHz air-to-air frequency.

At the beginning of the week, the paperwork was signed and the plane was ours. We just needed a break in the weather to pick up our new baby. To fly VFR in the winter, we needed our entire route clear for a solid day and preferably two. We also needed fairly low winds to safely get into Glenwood Springs, an airport AOPA recently listed as one of the more challenging in the U.S.

As our pickup day approached, I got more excited as the weather continued to look marginal. The forecast started to turn our way even as the view out the office window worsened. There was a brief opening in the clouds on Thursday, but winds in Glenwood were gusting 20 knots or more. We decided it was safer to wait it out. When Saturday arrived, our patience was rewarded with high pressure and severe clear along the entire route.

Avoiding the back pages

The more factors that put a flight at risk, the more likely one or two of them will line up to cause an accident. Maiden flights and other non-routine operations are beset with more risk factors than traveling around the pattern at a familiar airport in a familiar airplane.

Unfortunately, I was made aware of the risks by reading about a fellow pilots demise picking up his new airplane the week before I picked up mine. The positive thing is that it lead to a more thorough consideration of the risk factors for my maiden voyage.

The act of simply enumerating the risk factors and having a plan to mitigate them was our first line of defense. The second most valuable experience for me was hangar flying with more experienced pilots during the planning process. As a low-time pilot and first-time plane owner, there are others who know more. From an actuarial standpoint, my 300 hours makes me the aircraft insurance equivalent of a teenage driver. Unlike most teenagers, I have the wisdom (and gut) of a middle-aged aviator.

The coolest thing, however, is I have a new airplane!

Mike Hart is an Idaho-based private pilot with about 400 hours, and is proud part-owner of a Cessna 182.