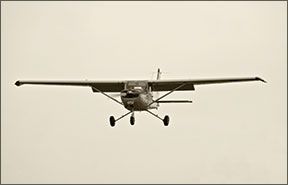 Especially when looking at recent accidents involving scheduled airliners, it occurs that some people are still having problems with their landings. Yes, they can be difficult to master, especially when crosswinds or other factors complicate things and distract us. But this shouldn’t be so hard.

If you’re having trouble, it may be you’re simply out of practice. If not, there may be something you’ve forgotten, or were never taught. Let’s run through five typical landing problems and some solutions.

Pattern Precision
A good landing results from a good approach, and a good approach starts with a well-flown pattern. If you find yourself jockeying throttle, pitch and flaps while sliding down final, the cause may involve a sloppy pattern, one either at the wrong altitude or placing you too close or too far from the runway on downwind. Failing to reduce power and properly configure the airplane can have an impact, also.

There are many rules of thumb for how close or far from the runway we should be on downwind. In a high-wing airplane, maybe the runway should be two-thirds of the way up the strut, if any. In a low-wing, maybe it should align with the fuel cap, or some other identifiable feature. The real answer depends on the airplane and how you fly the base leg.

If you’re in a relatively slow trainer, you may want to be closer to the runway on downwind. In faster airplanes, which need more room to make the next two turns before aligning with the runway, a little extra space may help. If you’re high, and were trained to reduce and set power abeam the numbers, configuring the airplane and then waiting a bit before turning base, you might not be pulling off enough power or waiting too long before turning. The tell is how high you are when you turn final. If you need to add power, it’s likely you’re extending the downwind leg too far. If the airplane is too high after the turn from base, you’re not pulling off enough power.

Try this: Abeam the numbers, pull off the power, drop the gear and a notch of flap, then immediately turn your base leg. Don’t touch a thing until you’ve turned final. If the power reduction was correct, all you’ll need to do is apply the rest of the flaps. The airplane will naturally steepen its descent and slow.

If you appear high, continue the approach, allowing the flaps and reduced power to steepen the approach. If you wind up too low, execute a go-around and try again, reducing power to a slightly higher setting on the next attempt.
Each airplane is different, even though many of us were taught to do things in the pattern by rote. If you’re too high, too low or too fast on final, make power, configuration and pattern-turn adjustments on downwind. Based on winds at pattern altitude and on the surface, learn to gauge conditions so there’s minimal power jockeying from downwind to touchdown.

Evaluation
Some pilots fail to assess their approach and are surprised when they turn final and the airplane is too high or too low. We’ll take too high over its opposite every day, but the idea here is to be Mama-Bear-just-right.
One way to help evaluate your pattern and approach would be to establish target altitudes and airspeeds at various points. Examples might be 800 feet agl and 90 knots when initiating the turn to base, then 400 feet and 80 knots when turning final. On short final, you’d want to bleed off some of that speed, perhaps by adding full flaps, reducing power a bit or both.

The howgozit evaluation based on firm numbers falls down when the wind is strong, though, or when you’re extending the downwind for traffic. In the latter case, you probably should be maintaining altitude until turning final, which will be longer than usual. In the former, you need to remember that a stiff wind on the ground usually means a stiffer one on downwind. On final, your groundspeed will be slower, but on downwind, it’ll be higher. Delay your descent, perhaps until nearing the turn to final. And initiate the turn to base—which should be greater than 90 degrees, to crab into the wind—sooner than you would normally.

Sight Picture
Another element of evaluating an approach focuses on, well, where along the runway your focus is during the final approach and flare. Ideally, you want to focus down the runway, which helps improve your depth perception and the accuracy with which you gauge your height above the runway.

Just as when deciding how close or far away from the runway you should be on downwind, each airplane offers a different sight picture. But that shouldn’t matter—you should be gauging your final approach and the point at which you’ll flare by looking down the runway, not at the numbers. Your first few landings were spent trying to figure out from what height the airplane could survive your flaring, but by now you know. The likely problem is you’re having trouble gauging how high you are. Surprisingly, looking down won’t help at all. Until you memorize the sight pictures involved in a good landing, you’ll be hunting and fishing for the correct ones. The graphic at the bottom of this page gives an example of where you should be looking: Not immediately in front of the airplane, and not at the other end of the runway, but somewhere in the middle.

Flaring
The sight picture is critical to helping you determine where, when and how enthusiastically to begin the flare. And flare you must, since landing on the nosewheel can lead to all sorts of outcomes, most of them bad.
Ultimately, you’ll find that the speed with which you move the pitch control to transition from a nose-down to a nose-up attitude varies according to how fast you are and at what height above the runway you begin the flare. You can eliminate some of the variables by always approaching at the same speed.

If you do, and if you apply the nose-up pitch at the same rate every time, your landings will be consistent. They may still be poor ones, but you’ll be consistent. In that case, continue using the same airspeed, but vary the pitch-up rate: If you’re dropping it in, don’t pitch so high. If you’re doing three-pointers in a tricycle-gear airplane, pitch up more enthusiastically. Ballooning, of course, means either speed or pitch-up rate are too high. Fix one, then the other.

Airspeed Control
Last and certainly not least in our five suggestions on ways to improve your landings is controlling airspeed. As touched on earlier, you may want to establish different speed and altitude targets for various positions in the pattern, but the key to good landings is being at the right speed and right altitude when crossing the runway threshold.

Years ago, I was checking out in a V-tail Bonanza for insurance purposes. I’d never flown with that instructor before, but he clarified everything about landing the Bonanza when he suggested 70 KIAS “over the fence” short of the runway was an appropriate target speed. He was right.

Unless you’re flying a twin, an exotic single or experimental, you don’t want to be much faster coming over the fence. Certificated singles, by regulation, cannot have a landing-configuration stall speed (VSO) at gross weight greater than 61 knots. Coming across the fence at the speed of light (e.g., 80-90 KIAS) only means you’ll be waiting, waiting, waiting for the airplane to slow down enough to land, eating up precious runway all the while. At best, you’ll be nibbling at the flare while decelerating, until pitching up results in settling instead of ballooning.

On long runways, and with faster traffic nipping at your tail, by all means use a high speed until short final. But don’t try to land at that same high speed.

You’ll need to bleed off all that energy before flaring or even thinking about touching down. Trying to plant the airplane on the runway when it’s not ready is a recipe for landing on the nosewheel, if so equipped, and collapsing it. At best, you’ll bounce. At worst, you can be responsible for major repairs or a totalled airplane.

All Together Now
You can navigate through the busiest airspace on the planet, dodge thunderstorms like a pro and have ATC eating out of your hand, but if you botch the landing, that’s all anyone cares about.

Landings aren’t hard, but they can be tricky when the wind’s not calm. With these suggestions, you can hopefully diagnose and repair the flaws in your technique. If not, there may be something more fundamentally wrong. Invest in an instructor and let him/her make some recommendations. You’ll know when you’ve nailed it.